The establishment of control over Syria's East Ghouta and the occupation of the city of Afrin by the Turkish army has opened a new chapter in the Syrian war that enters its seventh year. What did Russian President Putin feel about the Russia-Turkey-Iran summit in Turkey dedicated to the regulation of the Syrian crisis? 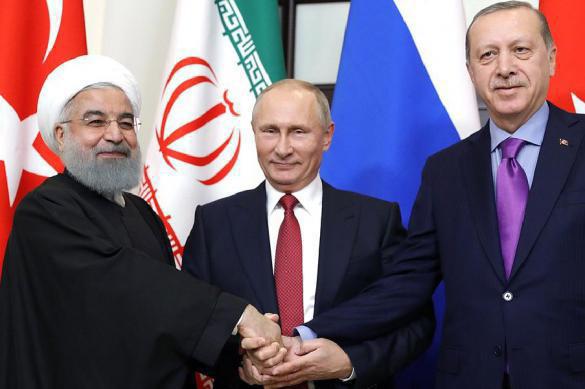 We believe that Putin was optimistic about the summit in Ankara. The attempts that French President Emmanuel Macron has made to intervene in Astana and Sochi talks failed. Turkey and Iran rejected his "mediation", while the intention to send additional French contingent to Manbij came across a serious warning from Turkey's Erdogan.

Russia controls not only the sky over Syria, but also all of Turkey's and Iran's operations in Syria. Without Russia's mediation, Erdogan would not be able to take Afrin under control, and Netanyahu would be fighting against Iran. The parties currently have to deal with Idlib de-escalation zone, where militants from East Ghouta moved. Afterwards, it will be possible to announce the destruction of organized resistance of terrorists from various extremist groups.

The US does not have many opportunities to show influence on the situation other than watch and hope for a chance to bargain to exchange its positions and territory for a place at the table of victors. The USA's presence in Syria is illegitimate, and their stake on the Kurds is not justified.

Vladimir Avatkov, director of the Center for Oriental Studies, International Relations and Public Diplomacy, told Pravda.Ru that Putin's choice of Turkey as the first country to visit after his reelection comes as a symbol that they understand very well in the East.

"It is very important for us that Turkey did not impose sanctions on Russia, nor does it associate itself with the West, but proceeds from a pragmatic policy of its own. Turkey takes initiative, and does not close itself from other players. All this makes it possible to look for solutions to very complex issues," the expert said.

"The involvement of certain Western partners, for example, France's participation in the Sochi summit is important, but it is up for Russia, Turkey and Iran to play the key role, and one should keep this in mind," the expert said.

As for US President Donald Trump, he understands that the Americans have failed to achieve required results in Syria because of a series of irrational moves that the USA has made in the country.

"Trump does not want to pay much attention to the success that Russia, Turkey and Iran have had in Syria. Instead, the US administration prefers to switch to other issues related to Skripal, as well as North Korean and Ukrainian issues," the expert said.

At a recent rally in Ohio, the American president said that the US military was still present in Syria to destroy the "Islamic State" terrorist organization (banned in Russia). In December, the Pentagon reported that there were about 2,000 American soldiers in Syria, but they have never contributed to establishing peace in the war-torn country.

"I want to get out. I want to bring our troops back home," the president said during a news conference. "Sometimes it's time to come back home. And we're thinking about that very seriously." he added.

Trump thus admits that the United States does not have a strategy to counter the Russian-Iranian campaign to unite the country under the leadership of Bashar Assad. Of course, Donald Trump's thoughts about the need for US troops to leave Syria could be just a publicity stunt rather than a political intention.

Nevertheless, it is possible that Trump will keep this promise.