Intelligence services of leading NATO countries have recently intensified their subversive activities against Serbia. Today, this is the only republic of the former Yugoslavia that does not want to join the North Atlantic Alliance. Belgrade accuses its neighbor Macedonia of espionage with the participation of a foreign factor, which is, of course, NATO. Will Belgrade be able to maintain its independence in the struggle? 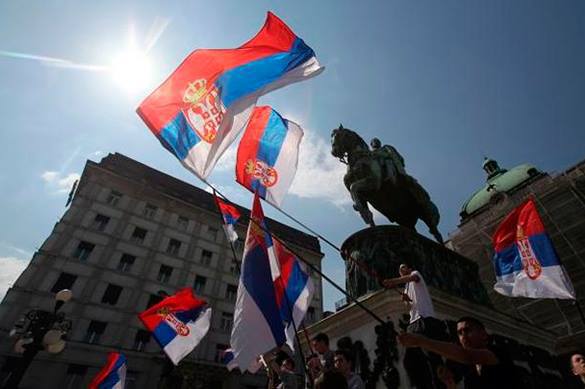 It is no coincidence a big diplomatic scandal has recently broken out between Serbia and Macedonia. Serbian President Alexander Vučić said he had irrefutable evidence to prove that Macedonia launched large-scale intelligence activities with the participation of a foreign factor in Serbia.

Although Serbia does not point directly at NATO, there is no doubt that it goes about efforts of the North Atlantic alliance and the CIA to conduct subversive activities against Serbia in order to change the balance of power in the country. Today, 80% of the Serbian population stands against Serbia's accession to NATO: the Serbians still remember how NATO bombed them.

Therefore, the NATO headquarters in Brussels and the CIA headquarters in Langley developed a joint secret plan to conduct intelligence and propaganda work in Serbia in order to change the attitude of the Serbs to NATO.

On 20 August 2017, the Serbian Ministry for Foreign Affairs withdrew its embassy staff from Macedonia to Belgrade for consultations. However, the Macedonian government rejects Serbian accusations of espionage on the Serbian territory. In addition, it became known that Macedonian intelligence agencies were illegally tracking down Serbian diplomats in Skopje.

Skopje does not have a unified position on the upcoming vote at the UN regarding Kosovo's accession to UNESCO. Earlier, Prime Minister of Macedonia, Zoran Zaev, stated that as a sign of solidarity with Serbia, Macedonia would abstain from the vote on this issue.

However, brushing aside the current scandal between Serbia and Macedonia, it looks like Belgrade succumbs to the influence of the EU and the US when it comes to the current phase of sharp confrontation between the West and Russia.

Here is a specific example. In October 2016, under the pressure of NATO and the CIA, Serbia deported several Russian citizens who were unfoundedly accused of spying on the Montenegrin Prime Minister. It was reported that Serbian intelligence identified Russian spies who "used sophisticated equipment to track the movement of Montenegro's Prime Minister Milo Djukanovic."

Naturally, publicizing such "evidence" against Russia, a brotherly nation that has always been on the side of Belgrade since 1991, could not but cast a shadow over bilateral relations between Russia and Serbia.

On the one hand, Serbian President Vučić says that "Serbia will always maintain friendly relations with the Russian Federation, despite pressure from the outside." On the other hand, Vučić recently announced that it was necessary "to seek a compromise in the conflict with the Albanians around Kosovo."

The latest statement from the leader of Serbia may mean that the EU leadership is exerting pressure on Belgrade. The EU gives Serbia vague promises to accept it into the European Union. Will  Belgrade take the side of the European Union on the issue of friendship with Russia and the status of Kosovo? We will find this out in the near future.