NATO kills Serbian children. What will Russia do?

Serbian President Tomislav Nikolic signed an agreement about the diplomatic immunity for NATO representatives and logistical support for the alliance in the country. Is Serbia a step away from becoming a NATO member or will the country be able to preserve its neutrality? 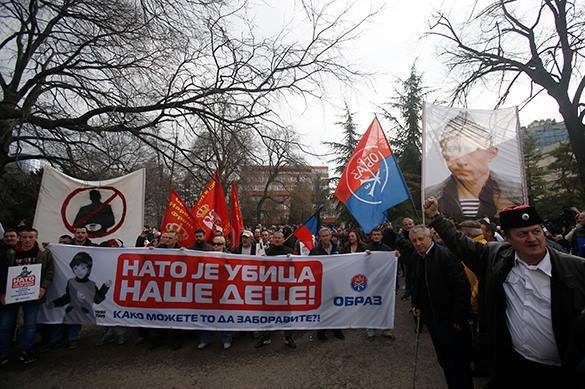 "The document that Nicolic signed is an agreement that enables NATO to obtain full support of the Serbian authorities for transportation, technical assistance and supplies of NATO troops," Elena Guskova, the head of the Center for Contemporary Balkan Crisis at the Institute of Slavic Studies of the Russian Academy of Sciences told Pravda.Ru. "The Serbian government covers all the costs for these activities, whereas NATO shall not carry responsibility in the event any damage is caused to Serbia. Not even if someone is killed," she added.

This is not the first contract that Serbia has with the alliance. "At first, there was an agreement for the regulating the transit of NATO troops via Serbia and Montenegro and the use of Serbian airports, sea bays, roads, railways, barracks, information and communication systems. This agreement was signed secretly by Foreign Minister Vuk Draskovic back on July 18, 2005."

According to Wikileaks, the Serbian administration (after Milosevic) conducted secret negotiations with US diplomats in the early 2000s and was ready to receive an invitation to join NATO. In 2014, the Serbian government approved a special plan to build a training center at a Serbian army base within the scope of "Partnership for Peace" program.

Noteworthy, the Serbian capital of Belgrade has held NATO summits before. In June 2016, a regular summit will consider the issue of Serbia's accession to NATO. Interestingly, the news about the contracts was exposed to the Serbian public post factum. One can feel sorry for the Serbian people, but not for its administration. Therefore, this is not a case of "Stockholm syndrome" as Russian Foreign Ministry Maria Zakharova said.

Russia has played its role in the breakup of Yugoslavia and the betrayal of the Serbs. In 1999, the federal parliament of Yugoslavia supported President Slobodan Milosevic's proposal for the country's accession to the Union of Belarus and Russia. In 2011, more than 20,000 Kosovo Serbs appealed to the State Duma of the Russian Federation seeking Russian citizenship. Russia did not support any of the proposals.

In addition, Russian President Boris Yeltsin refused to deliver S-300 air defense systems to Milosevic, and Russian paratroopers in Bosnia left Slatina airport in Pristina. Russia's actions  predetermined Belgrade's defeat in the war with NATO, the formation of the terrorist state of Kosovo, Milosevic's extradition to The Hague Tribunal and the establishment of the Tribunal for the Former Yugoslavia that is expected to announce its last sentences in March of this year.

Russia must do something about Serbia, taking into consideration the fact that Vojislav Seselj, a man who appeared at the Tribunal for Former Yugoslavia, has returned to the popular Serbian Radical Party (SRS). He is now preparing for early parliamentary elections to be held on 25 April.

Seselj has good chances to win. He is a charismatic figure, whose slogans find support among the population. Belgrade saw mass protests on February 20. The protesters were holding Russian flags and Putin portraits chanting "Russia! Russia!" and "NATO kills our children" As many as 20,000 people took part in the demonstration.

The Serbs are well aware of the fact that Serbia will not have to give away its southern territories to the Kosovars if the country has Russia's support. This is what Russia should pay first priority attention to. Ipsos polls show that an increasing number of young people (aged 18-33) in Serbia share positive thoughts about friendship with Russia and condemn the political course of Serbia as a NATO ally.

Russia can find new pro-Russian forces in Serbia. It goes about such associations as Rodoljub coalition, the Serbian People's Party and the socio-political movement "Doors." Russia needs to understand that Serbian national and pro-Russian forces will not be able to survive under the enormous pressure from the West. Russia has already announced that Serbia was no longer on the periphery of its interests. Six months ago, for example, Russia vetoed a UN Security Council resolution on Srebrenica.

Reference: Vojislav Seselj, 61, was a prisoner of the International Criminal Tribunal for the Former Yugoslavia for 12 years without sentencing. In 2003, he voluntarily surrendered to the ICTY. He was charged with inciting ethnic hatred, crimes against the non-Serb population in Croatia, Vojvodina (Serbia), Bosnia and Herzegovina in 1991-1993. In late 2014, the ICTY temporarily released Seselj for health reasons. In December 2013, the leader of the SRP was operated in the Netherlands and underwent chemotherapy for colon cancer. He does not intend to return to The Hague to attend the reading of the sentence.