Mess in the Oval Office: Special services strike back

As expected, the dismissal of FBI Director James Comey has led to a sharp deterioration in relations between President Donald Trump and US special services. The American press accused the head of state of delivering particularly sensitive information to the Russian foreign minister. Does it mean that the campaign against President Trump is taking a new dimension? It appears that certain forces in the United States want to deprive the institute of presidency of independence. 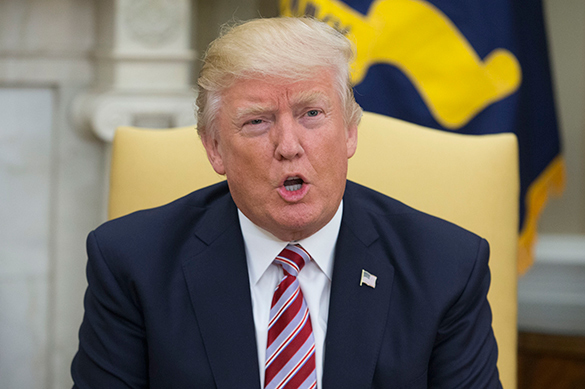 It was reported that US President Donald Trump shared top secret information with Russian Foreign Minister Sergei Lavrov and Russian Ambassador to the USA, Sergei Kislyak. According to the Washington Post, the secret information was obtained from an ally of the United States and was not subject to transfer to a third party. In particular, Trump informed Lavrov about the intention of the Islamic State organization to use laptops to explode passenger airliners. President Trump, the newspaper said, allegedly disclosed too many details to his Russian guests, who may thus figure out the source of the information - agents of a US-friendly country who spy for the USA in the ranks of ISIL fighters.

Let's have a closer look to this allegedly secret information.

Firstly, the news about the possibility for ISIL terrorists to use laptops to organize explosions on board airliners appeared several weeks ago, after the United States and several other countries banned the transportation of laptops in airplanes from the Middle East.  One does not have to be a super spy to understand: the Americans received a warning of danger and took it very seriously.

Secondly, it is clear that the information was obtained from secret agents, rather than ISIL's press releases.

Thirdly, Russia is a prime enemy for the Islamic State, just like the USA is. Russia has never cooperated with the Islamic State. Therefore, even if Lavrov and Kislyak found out something in the Oval Office that could endanger the lives of US or other agents serving inside ISIL, one can be 100% sure that they will not share their new knowledge with terrorists.

Fourthly, the US president has a legal right to declassify any document and any information without prior agreement with anyone. Therefore, even if he told something new to Lavrov, then there is nothing illegal about it.

Finally, both Russia and the United States are equally interested in protecting their citizens against ISIL terrorists. The two countries want to destroy this organization. Therefore, exchanging information on the subject seems completely normal. One can only praise US President Trump, if his efforts help prevent at least one terrorist attack.

In his Twitter account, Donald Trump wrote that he shared the information "concerning terrorism and aviation security" because he had a right for it and that he did it for "humanitarian reasons."

"As President I wanted to share with Russia (at an openly scheduled W.H. meeting) which I have the absolute right to do, facts pertaining to terrorism and airline flight safety. Humanitarian reasons, plus I want Russia to greatly step up their fight against ISIS & terrorism," Donald Trump tweeted.

In a nutshell, a closer look into the story reveals that it has been dreamed up. Yet, it allows, if desired, to raise the issue of the need to introduce control over president's activities (Trump or someone else - it doesn't matter) to deprive him of independence (in dealing with classified information for a start).

At this point, it is clear that US President has the right to declassify any information without agreement with either Congress or special services. Against the backdrop of the scandal about Trump's alleged ties with the Kremlin,  certain forces in the USA assume that it would be better to limit this right, because, as it turns out, most important issues of national security depend on the person who takes the Oval Office in the White House.

It seems that this is the purpose of the entire campaign against Trump and the institution of president as such.