Merkel asked Putin to give her a hope

The organisation of the G20 summit, Ukraine, Syria and Chechen homosexuals - all these issues are, of course, very important. Yet, they were not the questions, which German Chancellor Angela Merkel wanted to discuss with Russian President Putin in Sochi. None of them, on the eve of elections and against the backdrop of stormy European events, could make Frau Merkel forget about the isolation of Putin's Russia and have a one-on-one conversation with the Russian President in Bocharov Ruchey. 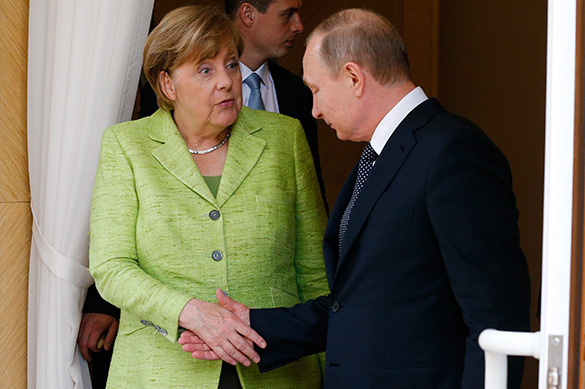 Indeed, Mrs. Merkel had much more serious reasons for arranging a personal meeting with Putin in Russia. Most likely, Angela Merkel flew to Putin on the wings of hope - a hope for help in maintaining the European balance in Germany's favour.

What is the German Chancellor afraid of? Undoubtedly, Merkel fears the consequences of Brexit, and the influence that the UK will be showing on the rest of Europe against the backdrop of growing concerns about the "dictate of Berlin."

As France is getting ready for a second round of the presidential election, the Germans can hardly hope for the loyalty of the French. The two presidential candidates are opposed to Germany. Marine Le Pen suggests an alternative to the European Union in the form of a "European alliance" of sovereign states. This project does not differ much from what London was pushing ahead of the Brexit referendum. Then British Prime Minister Cameron, for example, was advocating more power to national parliaments.

Le Pen's rival Emmanuel Macron, who was a staunch supporter of European integration and the strengthening of the EU, now speaks in favour of the EU reform, and the need to listen to those who are dissatisfied with the functioning of the Brussels bureaucracy. This suggests that Macron's strategy with respect to the EU may prove to be no less destructive than Le Pen's strategy.

If France starts campaigning for reforming the EU at the moment when Germany launches its own election campaign, Merkel's positions within the country and Germany's positions inside Europe will be shaken.

One may assume that such a state of affairs will shake Greece too. The Greek authorities have recently reached agreements with international creditors. They will have to strengthen austerity measures: increase taxes and reduce pensions, which will inevitably increase the degree of social tensions. If, at the same time, Britain offers its alternative to the EU, another social explosion and a political crisis in Greece is almost inevitable.

These two problems are quite enough for Germany, but there are also the Balkans. Germany needs a lot of resources to deal with all these problems, and the Germans know where to take them - in Russia. If there are no Russian resources, there is no European leadership. This leadership has been the alpha and omega of German politics since the unification of Germany.