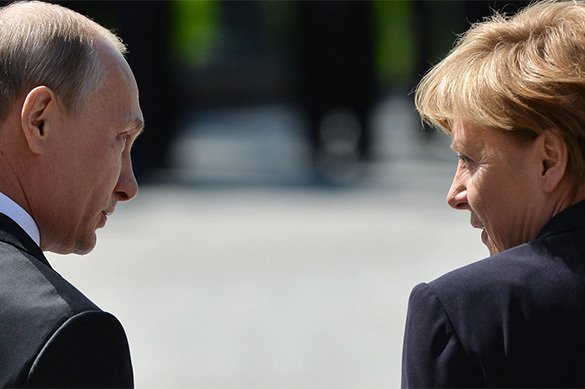 Experts believe there are several reasons for Merkel's visit. The Kremlin has reported in its turn that leaders would discuss current state of affairs and prospects of bilateral relations, including cooperation in energy, trade, economic, cultural and humanitarian spheres.

Key international problems such as combating terrorism, situation in the Middle East and implementation of the Minsk agreements are planned to be touched.

Beside that, Putin and Merkel are to express their opinion on the coming G20 summit in Hamburg, which is to take place in July.

Steffen Seibert, spokesman of the German government, used to claim before that the visit would be dedicated to preparation of the G20 summit, and discussion of such political problems as the Ukrainian conflict and war in Syria.

The Financial Times supposed that meeting of Merkel and Putin would hardly bridge extensive political gap between them. According to author of the material, under Trump's ruling, the German Chancellor and Russian President are trying to reset their difficult relations.

They may be wishing to see how Trump's coming in the White House has changed global political balance. Stefan Meister, expert on Russia at the German Council on Foreign Relations, has supposed that Mrs Merkel would manage to soften Putin's stance on Ukraine, warning that his belligerent mood could push Trump to 'dangerous reactions' - stepping up of a military operation in Syria for example.

Ulrich Heyden, German journalist and writer, has commented Pravda.Ru on disagreements between Moscow and Berlin and prospects of Merkel's visit.

Merkel's coming to Moscow may be connected with future elections in Germany. She wants to show that she is interested in good relations with Russia. Despite negative stance of our media on Russia, a lot of Germans want peaceful relations Russia.

It should be noted that Germany still acts as a demanding party. It is still not ready to recognize faults, its being guilty of such estrangement.

One more moment has incentivized the visit: the German authorities see that these cold relations between us and Russia will last for some time, and at the same time they do not want to lose the Russian market. The German business has traded more with Russia lately. Businessmen are eager to develop and reinforce these relations.

Stefan Meister, expert on Russia at the German Council on Foreign Relations, has supposed that Merkel might manage to soften Putin's stance on Ukraine, warning that his belligerent mood could push Trump to 'dangerous reactions. Can Merkel play a role of Trump's envoy?

I believe what Mr Meister says is wrong. Putin does not behave like a belligerent person, he just defends Russian interests. These statements of our media turn everything upside down and present like Russia will allegedly agree upon our stance soon. It's such kind of publicity stunt, which has always existed. During the Libyan conflict or Iranian talks for example they were saying that Germany allegedly played an important role. Russia does nothing aggressive. This Meister is quite a new figure in the Department. Before that Alexander Rahr was there, who understood Russian stances, but he was removed. While Stefan Meister likes criticizing Russia.

Merkel's coming to Moscow softens our rhetoric towards Russia a little bit. Our media will be cautious, but Putin will be criticized for sure. Our media tends to demand from everyone going to Moscow, taking a harsh stand. But that does not mean that the authorities act like that.

What about Ukraine, Germany has not taken any harsh stance. And this calm can be regarded in two ways: either Germany thinks of its relations with Kiev and will change them into more reasonable, or it will stick to its opinion, but then some new escalation is possible.