Not that long ago, many in the USA believed that Nikki Haley, a woman unsophisticated in diplomatic affairs and potentially dependent on President Donald Trump, will not be able to take a tough anti-Russian stance in the United National Organisation. As we can see now, those apprehensions were unfounded. The new US Ambassador to the UN has hit the ground running and raised brows of quite a few highly experienced diplomats. 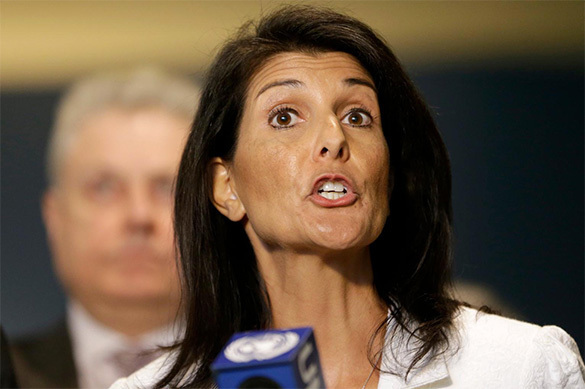 Nikki Haley was appointed on the position in late January. On February 2, at her very first meeting at the UN Security Council, Nikki Haley threatened Russia with eternal sanctions if the Crimea would not be returned Ukraine, and urged the whole world to condemn Russia for failing to comply with the Minsk Accords in the regulation of the crisis in Ukraine.

A daughter of emigrants from India of Sikh origin, Haley received a bachelor's degree from Clemson University, served as the treasurer of the National Association of Women Entrepreneurs, subsequently becoming its president. She was twice elected to the House of Representatives of South Carolina, and then as the governor of the state. This is quite an embodiment of the American dream! However, successful career experience in the domestic political arena may become a big disadvantage in foreign policy matters. American straightforwardness, determination and peremptoriness do not go together with diplomacy, the prime mission of which is to search for mutually acceptable solutions.

She said once in an interview with ABC that President Donald Trump never told her what to say about Russia, nor did he stop her from attacking Russia on the diplomatic arena. We must admit that Haley uses her card-blanche without a twinge of conscience. Below are a few of gems of Nikki Haley's oratorical art.

After Russia was accused of meddling in the 2016 US presidential campaign, Haley stated: "Take it seriously. We cannot trust Russia. We should never trust Russia." The use of the word 'never' in this statement is particularly charming: the US Ambassador to the UN thus puts a fat cross on prospects to improve Russian-American relations with this reckless phrase alone.

During the open debate at the UN Security Council about conflicts in Europe, Nikki Haley stated that the US was ready to improve relations with Russia, but Russia would have to fulfil its obligations under the Minsk Accords and end the "occupation" of the Crimea. Firstly, it is Ukraine that should fulfil its obligations under the Minsk-2 treaty in the first place. Secondly, the Crimea can not be "deoccupied" in any way, as it became part of Russia on the basis of a referendum.

At another meeting of the UN Security Council, Haley stated that Iran and Russia committed a war crime when they aided Bashar Assad in the destruction of the people and civil infrastructure of Aleppo. However, she completely forgets that the struggle against terrorists is not equivalent to the "destruction of the population." She also misses the fact that actions of the United States and its allies in Iraqi Mosul lead to much more catastrophic consequences.

Perhaps the best example of accusatory panegyrics of the newly appointed US Ambassador to the UN was her remarks after the alleged chemical attack in Syria's Idlib Province. "If Russia had been fulfilling its responsibility, there would not be any chemical weapons left for the Syrian regime to use...The truth is that Assad, Russia, and Iran, have no interest in peace," she said. "When the United Nations consistently fails in its duty to act collectively, there are times in the life of states that we are compelled to take our own action," she added.

Everything is turned upside down in the above statement, and one may cast serious doubts on whether the US Ambassador to the UN has basic knowledge of logic. First and foremost, there was no international investigation conducted into the attack to establish Bashar Assad's guilt. Secondly, Russia helps the Syrian government in the struggle against terrorism, which is not equivalent to "protecting the regime." Thirdly, one can not launch Tomahawks at a sovereign country just on the basis of far-fetched causes, as the USA did.

With Nikki Haley as US Ambassador to the UN, we can see same crocodile tears over dead children (as if the United States has ever stopped at children's blood while achieving its imperial ambitions), the demonstration of photos of victims for the audience, manifestations of Russophobia and the persistent promotion of US interests to the detriment of interests of all other countries.

The Americans are good at packing their bitter pills in nice wrappers. They have been trying to make the whole world believe that the USA is "last hope of Earth," "an exceptional nation," the "moral conscience of the world," etc. As President Putin once said: "It's boring, girls."

If the US president appoints a representative with such odious political views to the United Nations, then, unfortunately, one can only forget about a possibility for the US foreign policy to change.