Turkish referendum: Another dictatorship has emerged

Turkey has voted for the presidential republic at a recent referendum. Amendments to the Constitution of Turkey received the support from 51.2 percent of citizens, whereas 48.59 percent of electors voted against. The margin of votes thus made up 1.25 million. 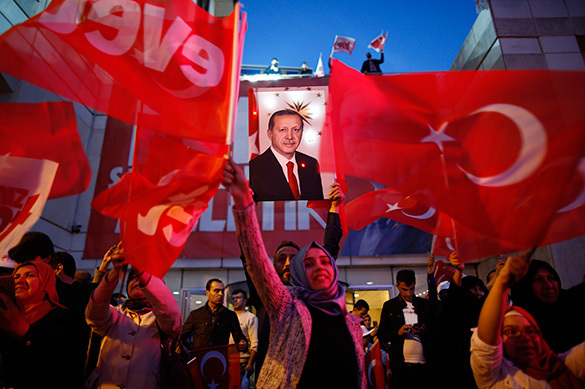 The referendum was held for the sake of 18 amendments to the constitution that expand president's powers and abolish the post of prime minister. The head of state can thus appoint vice-presidents, ministers and high-ranking officials. The president will also be able to declare a state of emergency, and presidential decrees will be possible to cancel by reaching an absolute majority in the parliament.

Analysts note that the new constitution embodies all ideas of the "non-liberal democracy" of nationalists. From this point of view, the winner gets everything.

The West has expressed its profound dissatisfaction with the result of the referendum in Turkey. German politicians stated that the doors to the European Union will be closed for Turkey for good.

Meanwhile, President Recep Erdogan does not receive universal support from the population. Many experts believed that people of Turkey would say "no" at the referendum. Resistance grows even among Erdogan's supporters. Government-controlled media called Erdogan a traitor for staying away from the rally of the ruling AKP party in his hometown of Kayseri.

Recep Erdogan himself stated that the reform of the constitution was necessary to ensure stability and prosperity.

Meanwhile, opposition activists in Turkey have already decided to appeal the results of the referendum. Representatives for the Republican People's Party want 60 percent of votes to be recounted due to violations in the course of voting.

Pravda.Ru requested an expert opinion about the results of the Turkish referendum from Nikita Danyuk, deputy director of the Institute for Strategic Studies and Forecasts.

"How will the results of the referendum affect relations between Turkey and the European Union that Turkey wanted to join for so many years? How will it affect Turkey's relations with Russia and the rest of the world?"

"First and foremost, the result of the referendum is a personal victory for President Erdogan and his political team. He will receive new powers, his range of political instruments will be expanded. He can now dissolve parliament and appoint judges. This shows that Turkey is building a strict power vertical with Erdogan at the head. Among many other things, he will be able to run for another term: Erdogan will be able to stay in power for two more terms as a result of the referendum. This is what he was striving for.

"At the same time, we can see that the Turkish society is divided. The referendum has exacerbated  the already strained relations within the Turkish society between various political groups, between Erdogan supporters and the others. The positions of so-called Kemalists - the people who believe that Turkey should uphold secular principles of Kemal Ataturk - have become more vulnerable. Accordingly, the military, who have always been the main guarantor of stability and security in Turkey, the backbone of statehood, have lost power too.

"As for the relations with the outside world, the EU in the first place, the European Union had made it clear to Turkey that it would not become one of its members. It appears that Turkey has reconciled with this too, despite many vague promises from Brussels.

"Moreover, the relationship between Erdogan and EU leaders had been quite tense prior to the referendum. We all remember the scandals that occurred with the participation of Turkish officials in Germany and Holland. After the referendum, those relations can only become even worse. For example, one of presidential candidates in France, Emmanuelle Macron, stated that he was very concerned about what happened in Turkey. Most likely, Turkey's relations with the European Union will remain in a state of crisis in the near future as well.

"If Erdogan continues removing his opponents from Turkish political space, as it happened after the failed coup, we will most likely see another wave of criticism against Erdogan from all sorts of European politicians.

"As for the United States, Erdogan will be developing political communication with the new American president. Donald Trump is not the one who glorifies principles of freedom, democracy, humanism that his European counterpart constantly speak of. Given the fact that Trump pays first priority to national interests, I believe that the dialogue between the United States and Turkey can be possible.

"As for Russia, Russia can can only care less about the results of the Turkish referendum. We have seen that Erdogan is a very complicated partner. Russian-Turkish relations were on the verge of collapse after the incident with the Russian fighter jet. Yet, the Turkish administration understands that it is impossible to deal with many issues in the Middle East without Russia. They also know that further confrontation with Russia can only harm Turkey.

"Russia should be very cautious about Erdogan and his actions. It is dangerous to think of Turkey as our strategic partner. Now we have a situational alliance."