The Rothschilds: 8 times richer than the richest 8

For one day, the media talked about the research of Oxfam International [here: https://www.oxfam.org/en/pressroom/pressreleases/2017-01-16/just-8-men-own-same-wealth-half-world ] showing that the wealth of the 8 main billionaires exceeds that of the half poor of the world population, 3.6 billion. 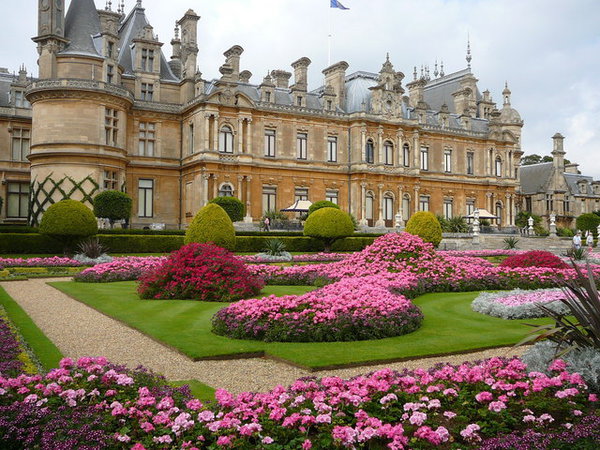 Added together, their wealth worth 426,2 billions $.

This extreme inequality, concluded Oxfam, "calls for a fundamental shift in the way we run our economies, so that they work for everyone, not just for some".

In the rank of the top eight does not appear the name Rothschild. For various reasons: here we have not to do with individuals, but with a dynasty, whose members govern private fixed capital fiduciaries - no company (scalable), but only family businesses, carefully stolen from the goyim financial markets, and cross-shareholdings.

In short, it is still the structure established by the founder in the 18th century, Mayer Amschel Rothschild. Based in Germany, the ancestor scattered her five children in several European capitals, each equipped with capital and knowledge to open up a business bank: Paris, Frankfurt, London, Vienna and Naples (it was one of the States with the most prosperous finances). It was thus the first international holding of credit, which took advantage of the European wars triggered by the Jacobin Revolution and Napoleon. Lending money to the States that the wars got into debts (typically, to the Austro-Hungarian Empire, to the British), from which it accepted securities and treasury bills, and taking all the good opportunities to take the financial control of the most various industries, in shortage of liquid assets.

The son who was more successful was the one who settled in London, Nathan Meyer Rothschild: he married Hannah Barent Cohen and from her he had seven sons and a substantial financial gift; in 1811, during the Napoleonic Wars, he financed the British war effort de facto almost alone - without neglecting to fund even the Bonaparte, in secret. On 18 July 1815 it was a courier of Rothschil & Sons who informed the British government that in Waterloo things went wrong for Napoleon; the government did not believe it and then Nathan played the game: he began to sell off the British debt securities, as if he knew that soon they would be waste paper. Other wealthy British, in a panic, did the same; the stock market collapsed. Anonymous strong hands (Rothschild's agents) had already been buying up bonds at bankruptcy liquidation prices; when the news that Napoleon lost at Waterloo arrived, Nathan was the owner of the London Stock Exchange. Yet in 2015, UK is returning in installments the capital borrowed from Rothschild.

Today, the riches of the dynasty remain unimaginable; it can largely disguising with the method of non-listed companies, which do not publish financial statements, where family members work and are employed directly, with consanguineous marriages, heirs who continue to work closely together; for two centuries, a quarrel between relatives, which has produced a split of wealth, capital and enterprises, never appeared to light. No coincidence that the motto of the family, under the red shield, is (in Latin) "Concordia, Integritas, Industry".

In addition to the financial companies N.M. Rothschild & Son of London and the Edmond de Rothschild Group in Switzerland, the dynasty has incalculable stakes in banks, real estates, mining and energy. The vineyards that one or the other member have in France, South Africa, California, South Africa and Australia, are activities to leisure. The important investments, in "global investment", are not visible at all. Some doubt if the Rothschilds are today what was the company of Nathan, which became virtually the central banker of Europe, covering public debt, national saving banks, financing public infrastructure during the industrial revolution.

So you can not asses if the site Investopedia tells the truth [here: http://www.investopedia.com/updates/rothschild-family-net-worth-explained/ ], who tried to make a rough assessment and decrees (without specifying the assets and activities) that the wealth that the dynasty controls now amounts to $ 2 trillion: 2000 billion. If true, it means that the Rothschilds are eight times richer than the eight richest billionaires.

Millionaires sniff the collapse, and run (away from the society they made)

Certainly not the Rothschilds, but the "half-millionaires", the hedge fund managers, the founders of successful startups, rich in millions (not billions), are buying luxury bunker in anti-atomic shelters recycled into expensive condos, hiring teams of armed guards, investing in airfields in New Zealand: at least according to an article in the New Yorker [here: http://www.newyorker.com/magazine/2017/01/30/doomsday-prep-for-the-super-rich ] that is making noise among those that count. Because the new riches fear a social revolt: "The tensions produced by the acute income inequalities are becoming so strong, that some of the most wealthy of the world are taking steps to protect themselves".

Once, the "preppers", those who are prepared to fight and survive in a total social collapse accumulating bullets and canned in some American desert, were the "lunatic fringe" made mainly by veterand returned as disturbed from Iraq, or some paranoid plotters; people without many resources, however. Now are the brightest minds of Silicon Valley to prepare themselves for an Armageddon, both natural (earthquake, San Andreas Fault) and the collapse of the social and  political society.

Antonio García Martínez, 40, admitted that he had purchased "two hectares of forest in an island in the North Pacific and have it equipped with generators, solar panels, boxes of ammunition". PayPal's founder, Peter Thiel, has not only bought land in New Zealand, but there founded a company that helps his equal (equal-income) to look there for pleasant shelters. In fact, in the first 10 months of 2016, foreign hands bought 3500 square kilometers in New Zealand. The place so far away is the object of their desires, also because it was considered safe if a global epidemic breaks out...

Reid Hoffman, founder of LinkedIn, told the reporter of the New Yorker: "Say that you bought a house in New Zealand is like a blink for us. We do Masonic handshake and we will share news like: You know, I know a broker who sells old silos for ICBMs, nuke-proof... Or we discuss topics such as: You have to buy a private plane. You must also take care of the pilot's family. They must be on the plane".

It's instructive to see how they're afraid by the society that they created by themselves and from which they want to run away. How they plan to save themselves by themselves, amassing ammunitions, solar generators, taking refuge along with their peers in fortified apartment buildings: a terminal spasm of American individualism and of the spirit of the West, with the wagons in a circle against the Indians.

"If we have had a more equitable distribution of income, put more money and energy in public schools, in parks, in the arts and in the public health, we would have removed a lot of that anger you feel in society. We have dismantled all these things." admits Rob Johnson, who founded an Institute for New Economic Thinking, where he tries to propose again to these frightened riches the strange idea of society as a co-responsibility system. But he laments the lack of "spirit of responsibility towards others" and openness to the possibility, among the riches, of a more decisive fiscal policy of redistribution.