Neoliberals have taken the Western world to the edge of suicide. The West considers any form of criticism of Islam as Islamophobia at the time when many followers of this religion commit most terrible crimes in the streets of Western cities. Terrorists rape, stab, decapitate, explode people, plow trucks into crowds and glorify Allah. What do Western governments do in response? They approve a growing number of billion-dollar social programs to support those who attack their citizens. 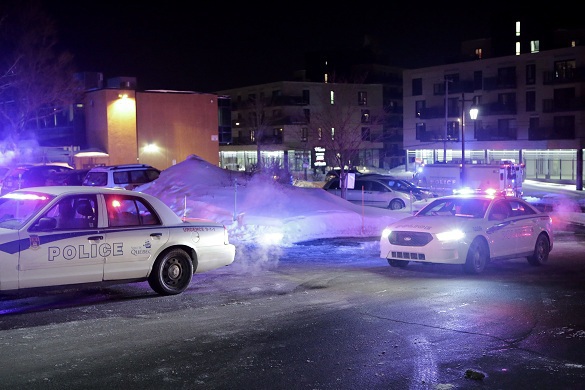 Islamophobia is all around us

On Sunday evening, three people entered the Islamic Cultural Center in Quebec (CCIQ, Canada), during a prayer service and opened fire on worshipers, killing six and wounding nine people. The attack was categorized as a terrorist act. According to TVA Nouvelles, one of the suspects was arrested; an AK-47 was found in his vehicle. It was also said that the police did not intend to disclose the motives or the profiles of the perpetrators.

Canadian website La Press said that in November of 2014, one could see racist posters near mosques in the province of Quebec. The website did not remind that those posters appeared in connection with two attacks on citizens. In one of them, a terrorist rammed a truck into a group of military men, whereas in another incident, an Islamist attacker opened fire on military men in Ottawa and broke into the building of the parliament, where the prime minister was speaking.
On July 9, 2016, The Sun published a letter written by "Islamophobes." The author of the letter insisted that CCIQ in Quebec (Centre culturel islamique de Québec) had connections with Muslim Brotherhood movement (banned in Russia and Egypt). The author of the "Islamophibic" letter wrote that the CCIQ was actually a radical mosque, where the faithful were invited to read the works written by advocates of violent jihad, sharia, inferiority of women and violent homophobia. CCIQ President Mohamed Yangui denied the allegations and called them nothing but lies from beginning to end.

A parishioner of the mosque, a person named as Hamza Jeremiah, told La Press, that the events in Quebec reflected the significant growth of intolerance that has recently occurred around the world, including after Donald Trump's coming to power in the United States. "This is ignorance. People come here to pray, rather than do evil," the man said.

Islamism has been threatening the West since the 9/11 terrorist attacks in the USA. Mainstream Muslims say that Islam is a religion of peace, while extremists are simply degenerates. The Cairo Declaration on Human Rights in Islam from 1990 calls to reject everything that comes contrary to Shariah, including criticism of Islam. Article 22 (a) of the Cairo Declaration says that "everyone has the right to express their opinion freely in a way not contrary to principles of Sharia." Therefore, people of other beliefs should not speak about the inadmissibility to chop off limbs, stone women for adultery or kill apostates (those who left Islam). Any criticism of Prophet Muhammad was declared a crime.

The ideology aimed at the Islamization of the world (the precedence of Sharia over secular law) has led to the appearance of Muslim-populated out-of-control neighborhoods in Europe and North America. Migrants refuse to integrate themselves with Western communities, whereas Sharia gradually infiltrates Western  institutions of power and destroys the rule of secular Western culture, Barbara Kay wrote in the article "Appeasing the Islamists in Quebec" for the National Post. "Islamists invented the myth of Islamophobia in Western countries to justify their call for a tightening of the noose on this precious freedom," the article says. The author referred to the example of Brigitte Bardot, "who has criticized Islam, mostly for its use of animal sacrifices, but has been prosecuted and fined four times for "inciting racial hatred.""

According to Barbara Kay, the Islamists have their "useful idiots," who say that any criticism of Islam, system of beliefs is a form of defamation. Jacques Fremont, president of the Quebec Human Rights Commission and president of the University of Ottawa, is one of such "idiots," Kay wrote. Fremont is the father of Quebec's Bill 59 - the crown of "Islamist appeasement." The bill, if passed (it was sent for further development in 2016 - ed.), would entitle QHRC to pursue websites  and individuals who "incite violence."

It turns out that it can be possible to sue those who post their anti-Islamic views on blogs or Facebook.

Nowadays, migrants feel at home in Western countries. They attack and abuse local citizens, but the authorities do nothing to stop them. The ideology of tolerance served under the sauce of the struggle against racism and xenophobia is fueled by financial incentives. In Germany, for example, every refugee receives free health insurance, free food stamps and public transport tickets. In 2016, Germany spent 21 billion euros on such programs. It goes without saying that it is German taxpayers, who funded those programs.

The more the West corrupts the Muslims, the more they feel the collapse of power, they more they will rape, kill and lobby Sharia law, while destroying the cultural identity of Christianity.

"The era of political tolerance has ended with the arrival of Donald Trump. The attack on the Quebec mosque has once again proved that Trump's decrees will exacerbate interethnic, racial and perhaps even religious tensions in North America. To a certain extent, this is a lingering effect of the invasion of Iraq in 2003," Vladimir Vasiliev, chief researcher of the Institute of USA and Canada told Pravda.Ru.