Russia has become the only defender of Christian values

The European Parliament has approved the resolution about the struggle against the propaganda coming from third countries, including Russia. Thus, the European Parliament has found the work of Russian mass media threatening. MEPs believe that the Russian authorities use a variety of tools, including multi-language TV channels, social media, news agencies and even Internet trolls to allegedly attack European values and disintegrate Europe. According to European officials, Russia imposes Christian Orthodox values ​​and increases influence around the world with the help of Russian media. 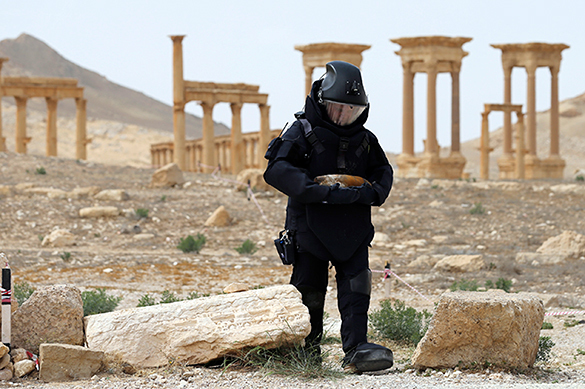 Prior to the decision, German journalist Holger Ekhof told RT that the new document would call on the EU to admit that Putin's regime was trying to play the role of the sole defender of traditional Christian values. In fact, the journalist added, the document would say that Russia was trying to impose Orthodox religion on the rest of the world.

Russia - the only defender of Christian values

Russia is indeed the only defender of Christian values. Christianity appeared in the form of the Apostolic Orthodox Church in the first century AD. The western branch - the Roman See - separated from the Orthodox Church in 1054. This branch had been stepping away from monotheism throughout its history. At first, Catholics recognized that the Holy Spirit was emanating not only from God but also from Christ. Afterwards, the Pope became infallible, and the Virgin Mary was deified. In the 10th century, the institute of indulgences was introduces, i.e. atonement for money.

America was founded by Protestants, who separated from Roman Catholics under the slogan: "We are exceptional, we shall see for ourselves, who God is." Individualism was raised to absolute levels, the unity in love was pushed aside, and people began worshiping instincts and mammon: "I am rich, therefore God loves me."

The above-mentioned revolution of Catholicism has made capitalism a religion of the West. The Church fell under the influence of the consumer society. The hierarchy of priests-politicians-merchants - was broken during the era of globalization. Priests became merchants, politicians lost control over merchants, and merchants started ruling the world. Look at Donald Trump, for example.

It is therefore natural that Orthodoxy is the main threat to oligarchs and multinational companies. It is Orthodoxy that has preserved monotheism and moral dogmas of Christianity. During Putin's stay in power, Russia started bringing Orthodoxy back to its ideological place that was lost during the time of Bolshevism. Putin said at the 70th anniversary of Patriarch Kirill: "Orthodoxy and Russia are inseparable. Throughout our history, Orthodoxy has been playing an important role in the life of our country and our people. Our moral values ​​are based on Christian values, so Orthodoxy is an important part of the soul of Russia."

One may say that Russia has found its national idea in the defense and promotion of Christian values. By the way, the Russian world is a society of Orthodox adherents. This gives the world a chance to search for unity, because all religions of the world are Abrahamic religions, so one can negotiate. Indeed, Putin always looks for compromises in foreign policies, sometimes to the detriment of his own image.

Blessed are the peacemakers, for they shall be called sons of God

Perhaps the most little-known part of the story of the Syrian conflict is the story of the struggle of the president for Christians. Modern Syria is the land, on which Jesus used to be wandering with his disciples. Palmyra is the center of Christianity in the IV-VII centuries. According to the Catholic Herald, there is something particularly menacing in the way Western governments run Wahhabi networks to overthrow the secular dictatorship as it would jeopardize Christians in the land of St. Paul. The governments demonize the Assad regime, which had been defending the Christian minority for decades. The publication wonders whether Putin leads a holy war to rescue Syrian Christians.

Barack Obama, according to The Chicago Tribune, has never attended any service of the United Church of Christ, in which he was baptized. The United States discredits religious beliefs in favor of gay rights, while Russia invests hundreds of millions of rubles in the restoration of churches across the country (mostly at the expense of private donations. Such a thing is unthinkable in the United States, the newspaper wrote. For example, well-known pastors Pat Robertson and John Hagee still believe that Russia is an atheist, communist and godless country.

As for Europe, they believe that Putin's anti-Western course is based on Orthodox grounds.  "We have been independent for 25 years, but our church is still dependent on Moscow," Iurie Leanca, former Prime Minister of Moldova complains. In 2014, Leanca signed trade and political agreements with the European Union. Indeed, the Russian Orthodox Church held a religious procession in Ukraine, arranged a meeting with Queen Elizabeth II and built the Orthodox Cultural Center in Paris.

Does Russia impose Orthodoxy on the West?

It appears that it is not Russia that imposes Christian values ​​on the world, but God himself guides Russia to help our civilization survive. Policies of same-sex marriage and genderless children, juvenile justice and promotion of homosexuality is a way to the degradation of man, who, as we remember, was created after the image and likeness of God.

A few key events have happened in the world recently. Moscow unveiled a monument to Prince Vladimir as the conductor of Orthodox Christianity, the founder of a great nation and a great culture. Another important event was the victory of Donald Trump, for whom "conservative Christians," as they now say, were praying in the USA. Finally, four senior Vatican cardinals criticized the tolerant stance of Pope Francis on divorce (there is no concept of divorce in Catholicism).

The European Parliament has made a move to attack Christian values ​​in Russia under the pretext of the promotion of Christian values in the Western civilization. If Europe does not change, Europe will perish.