Poland to start WWIII against Russia. Funny and scary at the same time

Poland is restless and itching. Striving to revive the great Rzeczpospolita, the country creates an intricate tangle while trying, with eagerness, to prove its devotion to Western masters. This comes into contrast with realities and opportunities, but the insatiable desire to show its importance seems to be uncontrollable. 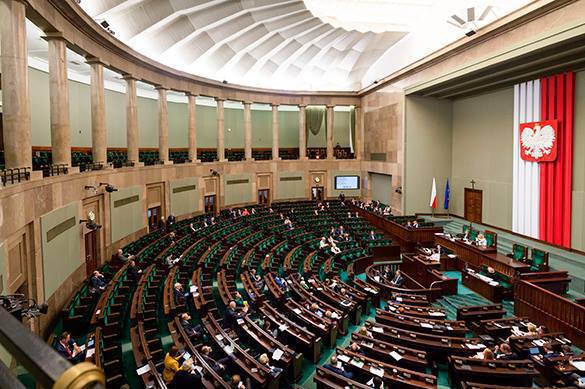 Attempts of Polish politicians to create an anti-Russian military bloc "Intermarum," renewed investigation into the death of Polish President Lech Kaczynski in a plane crash  - Pravda.Ru discussed these and other pieces of political news from Warsaw in an interview with Polish journalist and politician Conrad Renkas.

"Poland has decided to restart the investigation into the tragic death of Polish President Lech Kaczynski. The investigation concerns Polish officials to a great extent, as they seem to have contributed to the destruction of evidence. Can this investigation become a broad campaign, the goal of which is to destroy the opposition and those who disagree with the regime?"

"One should not look at the current state of affairs in Poland as if a civil war is gaining momentum there. The Polish government is not going to fulfill many of the promises that were made prior to the past political elections. This is the reason behind the intentions to revisit the air crash near Smolensk in 2010, in which 86 Polish citizens, including President Kaczynski, were killed.

"During the election campaign, members of the "Law and Justice" promised to struggle against scams, thieves and oligarchs. A year has passed since the elections, but nothing has been done. The slogans that were said a year ago were only meant to maintain a certain populist position and deprive us all of an opportunity to speak and write the truth about the economy, international relations, the NATO occupation and other sensitive issues.

"In Poland, there is a plethora of problems related to ethics, taxes, relations with the European Union and NATO. The Polish government is unable to solve all those problems. The issue of the air crash near Smolensk comes as an attempt of the government to distract attention from its own worthlessness and start a new wave of anti-Russian hysteria."

"We are concerned about Poland's intention to create a military alliance "Intermarum." Moscow believes that this project is against Russia, the former Soviet Union and the Warsaw Pact."

"This is just a higher level of insanity of the Polish authorities. It appears that Poland's Defence Minister Antoni Macierewicz wants to go down in history as the one who started WWIII. He also advocates the issue of the Smolensk plane crash, but there is another aspect in this regard. Polish leader Jaroslaw Kaczynski, the leader of the party "Law and Justice" is not young anymore. Everyone in the staff of the Kaczynski apparatus start preparing for the political struggle. Defense Minister Macierewicz tries to prove himself as a true Polish patriot, an anti-Russian patriot: there is no one else in this party, who could chair the Polish government. Polish politics, as always, is both funny and scary at the same time."

"The reputation of Mr. Macierewicz appears to be dubious. At times it seems that he loses the sense of reality. To which extent is he influential in the Polish government?"

"We do not know, whether he is demented or not., whether he truly believes in what he says. Maybe, he is only an actor, who plays a role? No one in Poland can answer this question. Yet, no one expects anything good from Defense Minister Macierewicz as he tries to capture the range of issues that fall within the purview of other departments, especially the Ministry for Foreign Affairs and the Finance Ministry. He approaches those issues from the standpoint of propagandist anti-Russian positions. Meanwhile, one of the most sensitive issues in Poland is the situation in the economy that has appeared as a result of the commercial war with Russia.

"In the coming months, one will have to do something about the harvest of Polish apples that no one needs. Polish farmers, who voted for "Law and Justice," want to know why the government supports these trade wars. Even parliamentary parties are opposed to the government, saying that Poland should lift sanctions from Russia and end the trade war, because the trade war with Russia simply kills both the Polish and the European economy."

"The ruling party understands that Poland is very close to the point of no return, when neither European nor Polish exporters will be able to reenter the Russian market, because their places will be firmly taken by other suppliers. All these sanctions and embargoes are not against Russia and the Russian economy - they are against the Polish and the European economy. Everyone knows it - both the Polish government and all Polish parties.

"Yet, the Polish government has chosen not to go against the EU and the USA. The Polish government always declares its independence from Berlin and other European countries, but when the European Commission banned the introduction of a new tax on large Western retail chains, Warsaw tailed away immediately.

"Poland has been getting increasingly dependent on Western capital. The Polish economy is not independent. This is only part of a larger German economy. Therefore, the Polish government can not work productively. Even national security issues lie in the hands of Berlin and Washington.

"Defense Minister Macierewicz has a lot to tell about the strong Polish army, but in reality the Polish army is an army of bureaucrats. They all do everything that Washington tells them to. It is the Americans, but not the Poles, who control all the F-16 aircraft that have been deployed in Poland."

Also read: Why is Poland paranoid about Russia?