April 10 marks three years since the crash of the plane of Polish President Lech Kaczynski in Smolensk. The political situation surrounding the tragedy remains tense. This is unlikely to ever change because the tragedy became another anti-Russian myth for the Poles. To deal with this, other controversial issues in the Russian-Polish relations have to be addressed. 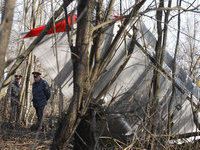 The first "apple of discord" was construction of a memorial at the crash site. In early April, it was reported that the Polish authorities asked Russia to allocate ​​100,000 square meters for the memorial. According to the Poles' plan, the length of Lech Kaczynski monument alone is 115 meters. In addition, they would like to build a chapel, museum, a security area and a park. If these plans are implemented, a Polish object exceeding the size of the Red or Palace Square in the Russian capitals would have appeared in Smolensk region.

The Smolensk region administration did not appreciate the intention of the Polish authorities. It was also noted that no formal request has been received from Poland. Meanwhile, Smolensk veterans wrote to the regional governor Alexei Ostrovsky asking not to build the memorial. They referred to the fact that in the fall of 1943 there were bloody battles at the crash site where thousands of Soviet soldiers were killed. The erection of such a huge monument to Kaczynski in that place would be simply inappropriate.

The second controversial issue is the transfer of the plane wreckage to Poland. Russian officials refer to the rules of the Russian legislation under which they represent physical evidence, and therefore should remain in Russia. Poland believes that once the plane was Polish, the Poles should be the ones to carry out the investigation. In addition, many Polish politicians believe that the Russians may be hiding something, although experts from Poland are given full access to the investigation.

Newspaper Rzeczpospolita known for its anti-Russian rhetoric stated the most radical point of view of some in the Polish society. The paper wrote on April 8th that fragments of the plane were too valuable of a tool of pressure not to be used in a game with Poland. From the point of view of families of victims of the disaster and the entire Polish people Smolensk was a tragedy, while for the Russians it was a challenge that could be responded to in a more or less successful way.

The Polish newspaper further wrote that for the Poles this was a raw national nerve. Even those Poles who were already tired of hearing about Smolensk wittingly or unwittingly have an opinion on the situation. The Russians did not care about this issue and it did not evoke any emotion. The paper argued that it was easy for Moscow to manipulate the Poles and put pressure on the nerve and cause the needed reaction in Poland without fear of adverse events in Russia. According to Rzeczpospolita, Russia can use the wreckage to achieve its goals within Poland. The paper wrote that the plane could be transferred to Warsaw when there is a need of a new twist in the relations, or it can be held up until the beginning of the electoral campaign for the elections to the Parliament to support one of the rival parties. Obviously, assistance to the ruling party "Civic Platform" means that it is not as anti-Russian as the party of the Kaczynski brothers "Law and Justice."

There are tensions in Poland as well. In late March at the request of the late president's daughter Martha Kaczynski and his brother Jaroslaw the Court reopened the case against the individuals who oversaw the fatal flight. Earlier, the prosecutor's office did not identify any action that would fall under any article other than negligence. At the same time, the preparation for the visit of Lech Kaczynski in Smolensk revealed many violations. It appears that now the investigation will specify which violations in particular took place.

In addition, supporters of the deceased head of state are dissatisfied with the fact that Prime Minister Donald Tusk on April 10 did not go to Smolensk, but instead visited Nigeria. They believe that Tusk did not show proper respect for Lech Kaczynski. But it is possible that the visit to Africa could not be rescheduled. In the end, President Bronislaw Komorowski will stay in Poland and take part in the events in Warsaw. A delegation of a lower rank will also go to Smolensk.

The tension around Lech Kaczynski's plane means only one thing: his death turned into another anti-Russian myth for many Poles. The late president saw Russia as a strategic adversary, and accused it nearly of all the troubles of Poland. He was flying to Katyn to commemorate the "victims of genocide", as openly announced by his supporters. They were not bothered with the fact that there were no signs of genocide in the Katyn massacre in 1940.

Radical members of "Law and Justice" continue to replicate the theory that Kaczynski could have been killed by the Russian special services, but did not bother to cite any evidence or explanation. They do not understand that Kaczynski was in many respects much more convenient for Russia than Tusk and Komorowski. He refused to talk, he demanded repentance. He could have been ignored and used as bogey of sorts.

However, current leaders of Poland, too, have no particular sympathy for Russia. Yet, they are willing to engage in a dialogue, firmly defending the Polish point of view both in terms of current events and the stories of bygone days. When a hand is stretched out in your direction, it is not that easy to reject it. Russia could be accused of arrogance and unwillingness to resolve long accumulating disputes. Even if you try hard enough, it is hard to find a rational argument proving that the Russian authorities would benefit from Kaczynski's death.

The Smolensk tragedy joined a long list of problems accumulated in the relations between Russia and Poland over many centuries. Until the two countries settle over the Katyn execution of Poles, Red and Whites in 1920, the partition of Poland in the 18th century before the capture of the Russian lands by Poland and a number of other difficulties, the tension over the Tu-154 is unlikely to disappear.

In the meantime, the plane wreckage and the construction of the memorial, as well as the causes of the accident, will be the subject of endless speculation on the Polish side. The Russian-Polish relations are too complex, and the Polish political elite have been harboring hostility to anything that has to do with Russia and the Russians for much too long.