Marine Le Pen won the first round of French elections, but failed to win in all districts of France in the second round. What does Le Pen need do to improve her image? Pravda.Ru asked an expert opinion from chief scientific officer of the Institute for Europe at the Russian Academy of Sciences, Sergei Fyodorov. 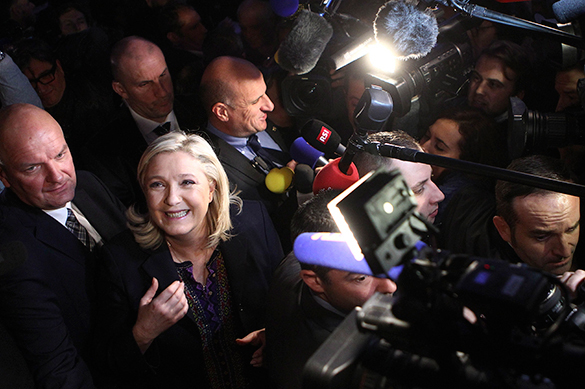 According to him, the majority system of vote excludes the victory of the National Front.

"Their opponents can arrange a joint bloc thus ousting the National Front and not letting the party get closer to victory.

The votes that were given to socialists in the first round of the elections automatically became the votes of republicans. The latter used them to win in a margin of nearly ten percent from the National Front," Sergei Fyodorov told Pravda.Ru.

The French Prime Minister intimidated voters by saying that the victory of the National Front would trigger a civil war. "I think that this tactic of intimidation has worked," the expert said.

Marine Le Pen has done a lot to move the party towards the center. It does not look like an extremist and dangerous party for the French. "This is what her success is about. Even though the party lost the elections, it has gained even more votes in comparison with both municipal elections that took place in March and European elections in May of 2014.

The party has a positive dynamics. This is a long standing trend - the French political system is moving towards a three-party system, the expert said.

When asked why Muslims also vote for Le Pen, the expert said that the National Front does not urge to suppress Muslims. Le Pen says that one has to do something  about radical Islam, but not Muslims in general. The National Front stands up for the rights of all French people, including Muslims, Jews and others, Fyodorov said.