War between Russia and USA may break out in Syria

The New York Times published a collection of theses from the letter written by 51 diplomats criticizing the US State Department for its policy in Syria. The diplomats suggested attacking Bashar Assad's government troops with bombs and missiles to topple the unwanted Syrian president. According to the diplomats, the bombings of the Syrian government troops will help in the struggle against the Islamic State terrorist group (the organization is banned in Russia). 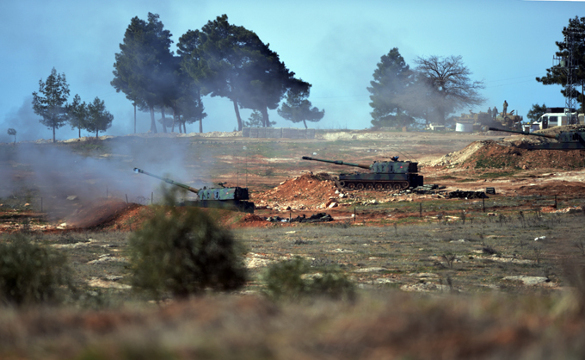 Vladimir Vasilyev, chief researcher at the Institute for the USA and Canada, believes that the most serious consequence of the above-mentioned  letter could be a probable war between Russia and the United States.

"The war between Russia and the USA may break out even tomorrow, if the US bombs Assad. Units of the Russian Air Force are still present in Syria, so clashes between Russia and America are very likely to occur in Syria," Vladimir Vasiliev said in a brief interview with Pravda.Ru.

Should the US start bombing Assad's troops, the situation may aggravate in mere weeks or even days, and this is one of the goals that Washington pursues for a variety of reasons with the election campaign being the most important one of them.

The prime goal is to topple Bashar Assad's regime and inform electors of another "achievement" of American democracy.

Noteworthy, Russian President Putin sent Defense Minister Sergei Shoigu to look into the state of affairs in Syria. The move comes as another signal for a possible military confrontation between the air forces of Russia and the USA, the expert told Pravda.Ru.

The US presidential administration has launched psychological preparations for a military solution to the Syrian problem. Diplomats calling for war is an episode of glaring absurdity, Vladimir Vasiliev said.

"This letter is a fake. It was arranged by orders from the top. It came shortly after the terrorist attack in Orlando. The US administration used the moment of confusion over the domestic, rather than an international terrorist act, to ask diplomats instead of colonels, generals or admirals to decide the question of bombings ," Vladimir Vasiliev said.

Most likely, the letter could not work among the military, who perfectly understand that an attack on Syria would lead to a direct military confrontation with Russia's Air Force.

"If the Orlando shooting had been an act of international terrorism as it was in Paris and Brussels, the US administration could have created a wave of mass discontent. Yet, it was an act of internal terrorism, so it was decided that it was up to US diplomats to decide on the bombings of Syria," Vladimir Vasiliev said.

Vladimir Vasilyev believes that US Secretary of State John Kerry indirectly supported the letter. Kerry had had a meeting with the authors of the letter several years ago.

"Kerry shared the concerns of the diplomats about the situation in Syria. Therefore, Kerry supports the initiative from the diplomats," the expert concluded.