The US prepares a new hotbed of tension in the chaos belt around Russia. It will be the Russian-speaking Estonian Narva. A 'secret report' of the Estonian government Commission on Security has been cited in the Eesti Ekspress. The provocation is dangerous because it can trigger a world war. 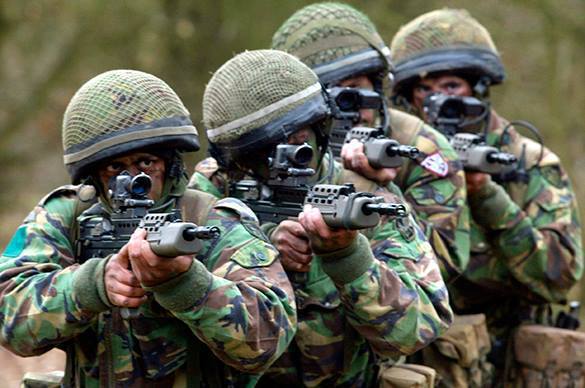 The report warns that events in the Ida-Viru County, the capital of which is Narva (80% of population are Russians), may develop under scenario of the Eastern Ukraine or Northern Ireland. 'Russification is going on in Ida-Viru,' the Delfi wrote.

'Unless we undertake certain steps, we will lose the county, and in case of a conflict with Russia, we won't be able to control situation in the cities of Ida-Viru'. According to estimations of the report, '60,000 people will passively support such conflict, while 1,500 residents are possible active adherents of the conflict.' The Irish scenario presupposes 'presence of a local terror net, which is supported overseas. In such case 200 people are enough.' So, they have already found terrorists and there are no doubts that these are real people.

Then author of the article surveys a lot of officials, experts and common residents of Narva. They are self-critical, the Estonians themselves are to blame, as they believe: they do not go to work and live in this region, because the government made it most depressive. The land is undeveloped with big unemployment. 'Some time ago Narva used to be a great disco, young people lived here. Now it's the city where they die. The population has aged catastrophically. There is even no pub here. Or a classical cafe. One cannot buy coffee and buns at the main square,' one of the residents said.

In order to settle the problem in the region it is offered to launch 'a special program for 10 years as a minimum, which would involve more significant presence of law-enforcement bodies. More active engagement of local leaders, as well as improvement of social and economic programs'.

But economic investments only will not be enough, 'mentality of local population should be changed,' one of the officials said. Sorry, but how will you be changing mentality, in case you make such remarks towards the Russians: 'As soon as you cross the River of Purtse, the IQ is falling'. doesn't it remind of 'downbass' regarding the Eastern population of Ukraine? 'There will never be any Donbass in Ida-Viru,' Kalle Jänes, Head of the Ida-Viru police security department, is sure. 'We know the people and control situation. Unless people from the other side of the Narva river are sent here, nothing will happen'.

Will it be or won't be, but there emerges a picture of reservation population with the Russian 'indigenous peoples of the Americas' - stupid, and depressive persons, who think only of how to go under the wing of Mother Russia. The Delfi article is ended with a remark of one Estonian 'patriot': 'The question is what will next generation be doing? Will they adopt European values or the Crimea will still be 'ours'?' Interestingly, is there no good translator in the Delfi, or IQ is changing while crossing the river of Purtse not from the West, but vice versa?

Another Baltic state - Latvia - has been recently engaged in the BBC scenario on the beginning of a nuclear war between Russia and NATO. Mayor of one of the Latvian Russian-speaking cities declares an autonomy, local Russians seize government buildings being supported by unidentified people in military uniform, then the Russian military invades Latvia. The situation threatens with a global conflict, while the British military and politicians discuss possible nuclear strike against Russia.

The scenario has been decided to be shifted to the real ground. Estonia has been chosen as we can see. There are local nationalists, Russian-speaking minority which is oppressed politically and economically and which can be easily provoked into riots; and there's also determination to sacrifice 'small but proud' people, to drag Russia into a new conflict.

'I don't know whether Americans are implicated in this, but I know that it corresponds 100% with desires and intentions of local neo-Nazis, who can take the initiative, showing discontent at the US, as it doesn't support them enough,' Illarion Girs, leader of the Movement for rights of the Russian-speaking residents of Latvia, told Pravda.Ru. 'These people should be preempted, everyone should realize that Russia won't allow mass violations of rights of its compatriots. Russia defended them in Crimea, haven't left them to the mercy of fate in Donbass, and they should clearly realize that it won't leave them in the Baltics.'

'It's an economical catastrophe what is going on in Ida-Viru and economic catastrophe is often followed by a political one,' Nikolay Mezhevich, Professor of European Studies at the Department for International Relations at the St. Petersburg State University, told Pravda.Ru. 'This article is absolutely provocative. Russia doesn't need a revolted Narva. Russia understands clearly that the case is about a state which is a member of the EU and NATO. On the other hand, if this state cannot manage with social and economic problems by itself, if people are deprived of jobs, unrest is possible. But it'll be unrest connected not with alleged joining Russia or China, people will be asking for money for health care, promenade repair, roads improvement, purchase of new buses and jobs.'