Thanks to their military intervention in Syria, the Russians were able to project their power in a way unexpected and completely new from the past. The United States has lost the primacy in long distance attacks because Kalibr Russian missiles have shown that Putin's Russia can accurately hit targets placed at thousands of kilometers away. 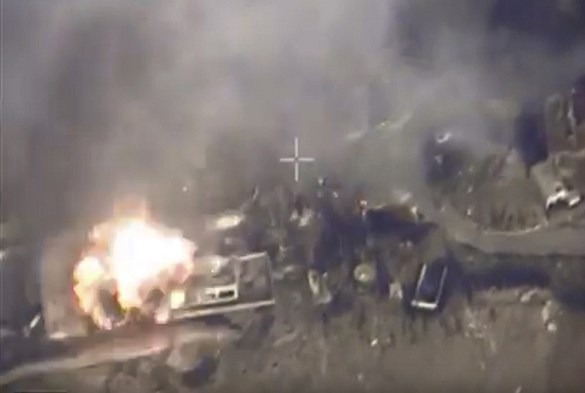 Now that the Russian intervention in Syria is partially finished, it is interesting to hear the opinion of an expert on military matters. Valentin Vasilescu of Voltaire Network has agreed to answer some of our questions.

Q) Mr. Vasilescu, might you remind our readers what were the working conditions in which the Syrian Arab army was at the beginning of the war, five years ago?

A) For four years of the war, the Syrian Arab Army had to face up to a considerable influx of well-equipped foreign mercenaries, while the government of Syria was under arms embargo, having been unable to update its own equipment since 2005.

The frontiers with Turkey, Jordan and Israel became crossing points for between 100,000 and 250,000 Islamist mercenaries (recruited and trained by Saudi Arabia, Qatar, the United States and Turkey) who opened several fronts, thus forcing units of the Syrian Arab Army to disperse in small groups across the country.

The jihadists had construction equipment which had been imported earlier, such as drilling machinery used for the rapid construction of tunnels. In the territories occupied by the islamist rebels, they also forced the Syrian civilians digging a huge network of hundreds of kilometers of galleries, tunnels and bunkers. While the Syrian Arab Army had no means of detecting them. Operations were mounted which surprised Syrian troops, who were incapable of reacting to the massive infiltration of terrorists and many bases and weapon and ammunition stockpiles were captured.

Syrian Arab Army was prepared for a classical war against its neighbors, but not an asymmetrical war. Syrian Arab Army had neither pilotless reconnaissance planes (drones) nor satellite images, unlike the jihadists, who had access to NATO information. The consequence was Syrian Arab Army adopting inadequate positions with little or no space between them, without covering fire between the elements of their positions, and without effective friend-enemy identification techniques. Syrian Arab Army were unable to ensure even elementary combat or preventative measures or predict in advance the best method for planning the war. The result being important losses by the Syrian Arab Army, at least 40,000 soldiers.

The success of the beginning phase of the rebels attacks spread quickly, mainly because of their perfect knowledge of the vulnerabilities of the Syrian Arab Army. The  rebels planning was handled by military instructors from the Turkish Special Forces ( Maroon Berets ) and Saudi Arabia.

Q) What were the characteristics of Russian aid to the Syrians until just before the recent deployment on the ground of the Russian armed forces?

A) Early in the war, the Syrian Arab Army was equipped only with Chinese QGF-02 helmets, individual armament consisted of automatic AK-47 rifles (or Chinese 56-type variants). The absence of night-vision equipment and binoculars with residual light intensification was also a serious handicap. Before the deployment of the Russian units in Syria, some of the Syrian Arab Army were equipped with 6B45 ballistic protective jackets, helmets in Kevlar 6B7, and AK-74M or AK-104 automatic rifles with telescopic sights and GP-30 grenade launchers. The Russians equipped the Syrian Arab Army with modern night-vision systems, AGS-17 thermobaric grenade-launchers, and 6G30 grenade-launchers (40 mm caliber).

At the start of the war, in the absence of snipers and observation points on the buildings, suicide bombers were able to choose their targets and blow them up, or enter with cars into the control points of the Syrian Arab Army. On the initiative of the Russians and Iranians, a school for snipers was created for the Syrian Arab Army, with Lebanese (Hezbollah), Iranian, and Russian instructors. Russian snipers are the best in the world, thanks to their weapons, camouflage, and training centers. Iranians furnished the Syrian Arab Army a sighted Austrian rifle, the Steyr HS.50, and the Russians supplied the modern Orsis T-5000 sighted rifle (7,62 mm caliber) and the sighted KSVK machine-gun (12,7 mm caliber).

During the First World War, when it was invented, the aim of the tank was to force and break down enemy barricades and lines of defense, thanks to protective armour, fire-power and great mobility. Today, anti-tank units equipped with missile systems are much less expensive than tank units, whose action becomes more difficult in an environment saturated with anti-tank technology. Syrian Arab Army tanks which are sent to re-establish order, without extensive research into the action perimeter and infantry support are ambushed by surprise, and come under fire from portable grenade-launchers and anti-tank missiles. Tens of thousands of US BGM-71 anti-tank Tow missile systems, Franco-German Milan-2 and Croatian M 79 Osa rocket-launchers were secretly introduced into Syria by the intelligence services of Turkey, Saudi Arabia, France and the United States.

Syrian tanks have no ERA-type (Explosive Reactive Armour) protection plates mounted on the front and the turret, nor systems which blind the guidance systems of anti-tank missiles, nor active-type protection systems, with interception captors capable of exploding anti-tank missiles before they reach the armour. Because of these missing elements, Syrian tanks have often been breached with single direct shots. After having been destroyed or damaged, hundreds of tanks of the Syrian Arab Army had to be adapted, soldering on protective plating, and after that, mounting ERA-type plates to neutralize the effect of cumulated shots.

At the beginning of 2016, the Russians delivered about twenty T-72B3 and T-90A tanks to the Syrian Arab Army which had effective reactive protection against US BGM-71 Tow anti-tank missiles. The T-90A piloted by Iranian teams was used in the composition of advance detachments to pierce the defenses of jihadist positions.

Q) You wrote an article about the techniques to counteract the air-warfare tactics that are part of the actual American military strategy. Whence originated this conviction?

A) Russian ISR (Intelligence, Surveillance and Reconnaissance) it was build up by tens of UAV and ELINT (Electronic Intelligence ) and reconnaissance aircraft  Il-20 and Tu-214 R. Both aircraft have equipment for the interception and jamming of radars and all types of communications, including military and civilian mobile telephony networks. Aircraft are equipped with digital high resolution cameras, opto-electronic scanning multi-spectral sensors also. The radar on board discover air and ground targets, side looking of the flight path, up to a distance of 400 km. It allows the display in digital form, the map of the land, by sensing automatically the emergence of moving vehicles, armored vehicles, artillery pieces, or to deploy those already known places ( by GPS coordinates ), in another location.

Russian ISR belong to C4I (Command, Control, Communications, Computers, Intelligence and Interoperability) which gather the targets for airstrikes and distributed on types of aircraft. Russian C4I subordinate also the Krasukha-4 equipment, deployed in Syria, which is able to jam the American spying satellites from the family of the Lacrosse / Onyx in low orbit, equipped with SAR (Synthetic Aperture Radar). SAR allows to penetrate both the layer of clouds, and the ground or walls of buildings, having a resolution of 20 cm.

Krasukha-4 is able to "blind" radars for the discovery and guidance of the missile batteries MIM-104 Patriot, located on the borders of Turkey and radars of all Turkish jet fighters F-16 C.

Russian C4I prevent the US and allies to discover the modus operandi of the Russians in Syria. In the absence of a minimum of information, NATO may not trigger the effective electronic countermeasures (ECM) against the Russian aviation in Syria.

Russian C4I coordinate the A2/AD bubble ( A2/AD stands for anti-access/area denial ) created by Russians in the eastern Mediterranean. A2/AD is a combination of systems such as surface-to-air missile batteries ( S-400, S-300, Pantsir-S2 ) and anti-ship missiles (Bastion) deployed to prevent forces from entering or traversing a certain area-from land, air or sea. Russian very sophisticated air defense capabilities are not against rebels in Syria, they're about anti-State Islamic air force coalition, leaded by US.

Q) Could you explain what weapons have been used by the Russians during their intervention in Syria? Have they proved themselves really effective?

A) Until the arrival of the Russian contingent, the Syrian planes were not equipped with high-precision guided weapons which could assure support for ground troops. They used mainly 57 mm caliber rockets and FAB-50 and FAB-100 bombs, launched in a dive at 1,500 to 3,000 meters. At that height, Syrian planes were vulnerable to fire from Islamist artillery, either 23 mm and 30 mm caliber, and also to portable ground-air missiles (MANPADs), which explains the numerous losses suffered by the Syrian aviation.

Military science have the principle of "Economy of forces and means" that force commanders to achieve their intended purpose, without waste useless resources. From the point of view of military science Russia's strategy was excellent, the purpose of  9.000 of Russian airstrikes was the destruction of rebels infrastructure with the minimum of risks.

Modern Russian light bombers Su-24 and Su-34 were able to accomplish precision bombing missions by day or by night, at altitudes which are out of range of portable ground-air missiles. Multispectral sensors on board of ten Russian reconnaissance satellites and more than 50 UAV, deployed  in Syria was able to discover, almost completely, the underground network of rebel's tunnels. To destroy the jihadists network of underground bunkers ( reinforced with concrete up to 3 meters ) and tunnels, Russian aviation used the most elaborated penetration bombs KAB-1500 L ( laser guides ) or KAB-1500 Kr ( TV camera guided ) KAB-1500S G ( GPS guided ).

The main targets of  Russian aviation was rebels training camps, deposits of weapons, ammunition,  facilities for the production of explosives, the vehicle fleet and the deposits of fuel, the centers of transmission. The effect being the reduction up to 70 % of the rebels capacity combative, provoking acute shortage of ammunition, the inability to execute maneuvers, to coordinate and communicate between them.  In this kind of missions, Russian aviation used family of bombs KAB-250 S/LG, KAB-500 L/Kr, guided by laser, GPS, TV camera or IR, air-to-ground missiles Kh-29 L/T and Kh-25 T, laser guided or TV camera/IR.

Russian long range heavy bombers Tu-160 and Tu-22M3 used against rebels the cruise missiles KH-101 which have a range of 2.500 km and accuracy of 1 meter. Russian navy submarines and corvettes launched cruise missiles 3M-14T Kaliber from Caspian and Mediterranean sea.