Ukraine's 25 years of independence: A tail without a lizard

On August 24, Ukraine pompously celebrates the 25th anniversary of its independence. Ukrainian flags and embroidered shirts in the streets of Ukrainian cities dance before your eyes.  After the military parade and eloquent speeches about the special way and the choice of the Ukrainian people, the president of the sovereign country will go to meet German Chancellor Angela Merkel and French President Francois Hollande to receive the next portion of recommendations. 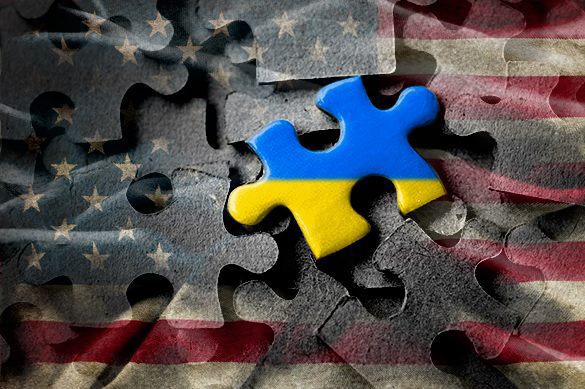 "In light of the lethal danger that Ukraine was facing in connection with the coup d'état in the Soviet Union on 19 August 1991" to "continue the thousand-year tradition of state building in Ukraine", "on the basis of the right to self-determination under the UN Charter and other international documents," the Supreme Council of the Ukrainian Soviet Socialist Republic proclaimed the independence of Ukraine on August 24, 1991.

On December 1, 1991, the Ukrainians went to the polls to take part in the referendum, at which they were offered to answer the following question: "Do you confirm the declaration of Independence of Ukraine?" The same day, the Ukrainians had to elect their president, even though  the-then Ukrainian Constitution did not envisage the position of president.

The results of the All-Union referendum from March 17, 1991 were completely ignored, even though 80 percent of Soviet citizens and 83.5 percent of Ukrainian citizens took part in the referendum, in which 76.43 percent of Soviet and 70.2 percent of Ukrainian citizens voted to preserve the renewed Soviet Union. Alas, Mikhail Gorbachev wanted to ruin the country, while  Boris Yeltsin, Leonid Kravchuk and Stanislav Shushkevich were craving more power. Thus, the will of the people of the world's largest and one of the most powerful states was swept under the carpet.

What has Ukraine achieved in 25 years of its independence? In 25 years of independence, Ukraine, formerly one of the most developed and advanced countries of the former USSR, has turned into a failed state that has lost its territorial integrity and can be compared to a number of poorest countries of Africa and Asia.

"It is tempting to attribute most of the losses to Maidan II and the ensuing civil war, but it is not quite correct. Maidan of 2013-2014 brought the main trends of the Ukrainian development to their logical conclusion," political strategist Vasily Stoyakin believes. "The main trends were about Ukraine's aspiration to build the post-occupation society after the country obtained independence as a result of the process that the country did not depend on at all.

There were no other grounds for the existence of independent Ukraine. According to the expert, Ukraine did not know what to do with its freedom. Ukraine did not know that the only difference between its new life and the "colonial" past was about the right to find new masters. "They found the new masters, but, unfortunately, the new masters had no intention to claim any responsibility for anything," Vasily Stoyakin said.

Under these conditions, Ukraine saw the rise of the new elite in the form of oligarchic bourgeoisie. The new elite proved to be quite effective to restore a part of the industrial potential. At the same time, it was too dependent on the West, but most importantly, its power was illegitimate inside the country.

Ukraine's 25: 15 years of revolutions and crises

"However, nearly all positive aspects that Ukraine has demonstrated during 25 years of its independence are associated with the activities of Leonid Kuchma. It was Kuchma, who built the  political and economic system of power of big national capital. However, being a technocrat, Kuchma did not try to change the ideology of the country's development. His presidency thus created a generation of consumers, who sincerely believed that the whole world was supposed to tolerate their quirks and support them financially. The collapse of the state and economy was inevitable," the expert said.

One can give many facts and figures to illustrate the things that have changed in Ukraine during 25 years, but only three would be enough, economist Alexander Okhrimenko believes. In the early 1990s, the average salary in Ukraine was at the level of about $20. Before Maidan, it was already nearly $480, but now - just $200. "During 25 years of independence, the Ukrainian economy was growing (along with the income of the population) in 1993-1998, 2001-2004, 2006-2008 and in 2010-2013. In total, it makes up only ten years. The remaining 15 years were the years of crises and revolutions," the expert said.

Let us compare GDP per capita in 1992: Ukraine - $1,511, Kazakhstan - $1,480. Today, the same numbers in Ukraine (data for 2015) make up a little more than 2,000 dollars, and in Kazakhstan - more than 10,000 dollars. How so? The answer is simple: there were no revolutions and civil wars in Kazakhstan. Prior to the "revolution of dignity," GDP was nearly 4,000, which was still not enough. Yet, the wars of oligarchs destroy the economy of Ukraine. As soon as they conclude a truce, the inflow of foreign investment grows along with GDP. When oligarchs arrange another Maidan, life in Ukraine turns into ruins.

"Here and now, when Ukraine celebrates 25 years of independence, a natural question arises: how will the country celebrate the 50th anniversary? Will Ukraine exist in another 25 years?" says Alexander Okhrimenko. After Maidan, the economy of Ukraine has been falling apart. All the talking about the EU market and Europe's love for Ukraine was nothing but shallow talking. The US State Department has made the Ukrainian government its puppets, whose main objective is to accommodate the Ambassador of the United States. In such circumstances, the standard of living from 2013 will seem a dream for many generations of Ukrainians, who will only be left to wonder why their grandfathers made those Maidan riots happen.

However, many people in today's Ukraine slowly realize that the "revolution of dignity" was not a revolution at all, but a coup that triggered a civil war. The leader of the Radical Party, Oleg Lyashko, has recently said that "the EU has deceived Ukraine as the free trade zone only works on paper." At a party conference, Lyashko told colleagues that Ukrainian goods have practically no chances to find themselves in Europe, while made-in-EU goods can be found in Ukraine easily. "The authorities are ready for anything to receive another loan from the IMF - they are ready to raise utility tariffs and the retirement age, to indiscriminately sell state property, to lift the moratorium on the sale of agricultural land and so on. We do not need financial help - we need jobs. When the Ukrainians have well-paid jobs, they will be able to help others," Oleg Lyashko said.

Noteworthy, the coup that ended with the toppling of President Viktor Yanukovych started when he refused to sign the association agreement with the European Union.

After the collapse of the Soviet Union, Ukraine was living like lizard's severed tail: the country was trying to pretend that it was living its own life, independently from the main organism. The tail has not grown back. Ukraine was trying to sit on two chairs. The country started selling out its sovereignty. Today's Ukrainian sovereignty is all about its symbols - the anthem, the coat of arms, the position of the president and other souvenirs.

"As part of the Soviet Union, the Ukrainian Soviet Socialist Republic was on the list of most industrially developed countries. Today, we have a territory that has returned to its roots  - embroidered shirts and gardens. Ukraine's industry is going down in history. The world's most powerful missile, Voevoda, and the biggest plane of the planet, "Mriya," can now be found in non-decommunized museums. They will soon disappear from the public eye completely, as one should not irritate the minds of the residents of the most European of all European countries with monsters of the Soviet past. As for the "achievements" of the past quarter of the century, one should mention the exodus of the people, the loss of the Crimea and the war in the Donbas, where people fight not to accept their "happiness."

Can a protectorate have an Independence Day? Political analyst Konstantin Bondarenko gave the following answer to this question: "Dominion countries do not have independence days. There is  just Canada Day, Australia Day and so on. The dominions have a complex system of relations with their mother country, the recognition of the sovereign rights of the monarch, etc. At the same time, the dominions have absolutely independent foreign and domestic policies, the financial system and so forth. Ukraine is not a dominion, because Ukraine does not have independent foreign and domestic policies. The country has no sovereign financial system either. Ukraine is a protectorate. Therefore, Ukraine's Independence Day is a luxury that a number of countries do not have."

It is a pity that Ukraine has Independence Day, but it does not have independence.