Ambassadors of six European countries will take part in the gay pride parade to be held in Vilnius, the capital of Lithuania. The officials expressed their intention to march together with other members of the parade in the center of the Lithuanian capital, reports RT. 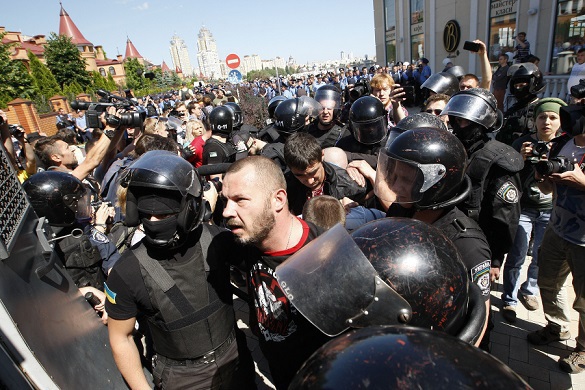 About a thousand people will march along the main street of Vilnius - Gediminas Avenue - as part of the LGBT march under the slogan "For Equality!" Ambassadors of Italy, Great Britain, Finland, Sweden, the Netherlands and Norway are said to take part in the event. Representatives of several other European countries - Denmark, Austria, Canada, Israel, France as well as the USA - expressed their support for the action.

Meanwhile, the LGBT community of Ukraine is getting ready to hold a similar march on June 12 in Kiev. Representatives of the Ukrainian law-enforcement agencies said that the police would not stop the nationalists, who promised to make a bloodbath out of the Kiev gay parade.

Ukrainian LGBT activists have been trying to hold gay marches in the country for several years now. Ironically, the only successful attempt was made in 2013, during the time of Viktor Yanukovych's presidency. After the Maidan coup, when Ukrainian homosexuals tried to arrange another march, rightist radicals explained to them that they should rather not do it.

Also read: Ukraine receives gay values from Europe instead of money
The chief of the Human Rights Committee of the Ukrainian Parliament, Grigory Nemyria, said that the march of the LGBT community in Kiev, scheduled for June 12, is to be held. The official also stressed out that discrimination against minorities was unacceptable in a state of law.

"On the eve of the March for Equality, I would like to stress this out that in accordance with Article 39 of the Constitution of Ukraine, citizens have the right to gather for peaceful meetings, marches and demonstrations. Basic human rights should be available to the LGBT community. Discrimination and aggression against minorities has no place in a state of law, which aspires to become part of the European community," the press service of the Verkhovna Rada said.

The March for Equality is to start at 10 a.m. at the main building of the Kiev National University named after Taras Shevchenko. Representatives of diplomatic missions are said to take part in the march.

Ukrainian nationalists promise to shed "rivers of blood" during the gay march in Kiev. Police officials said that they would not stop the radicals, if they attack gays. It appears that the Ukrainian authorities want to build the militarist and nationalist country while playing Western games of human rights and equality. On June 12, we will see what may come out of this.