Kazakh President Nursultan Nazarbayev warned the people of his country that any attempts to repeat the events of the Ukrainian crisis in Kazakhstan would be severely suppressed. The Kazakh President has been staying in power since 1989. Where did he make a mistake? 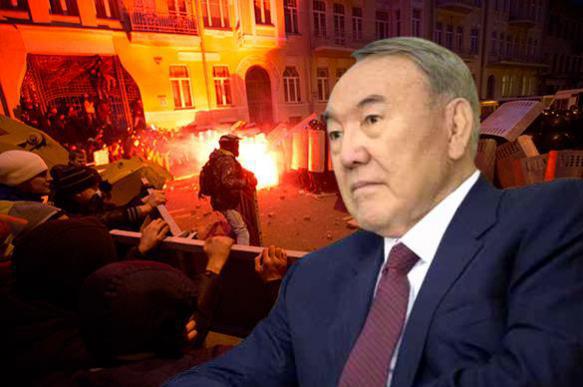 "The people of Kazakhstan do not want the Ukrainian events to repeat in the country. I know it, so let everybody hear. For those who want to bring them here - we will take most severe measures against those people, and don't you say afterwards that I didn't warn you," President Nursultan Nazarbayev said, speaking at a cabinet meeting on May 5th.

At the same meeting, Nazarbayev issued a decree imposing a moratorium on amendments to the Land Code of Kazakhstan, in accordance with which foreigners could rent land in the country for up to 25 years. The law was to come into force on 1 July. Thus, the president of Kazakhstan made it clear that recent riots in several settlements of the country were directly related to this event.

The protesters feared that the land reform would enable Chinese entrepreneurs buy large territories of Kazakhstan's land. As a result of the above-mentioned meeting, Kazakh President accepted the voluntary resignation of the curator of the land reform, Minister for Economy Erbolat Dosayev, and set up a new commission for the Land Code. Nazarbayev said that if the people did not want such changes, then the country did not need them.

Nevertheless, the President of Kazakhstan called the participants of the rallies "provocateurs." According to Kazakh television, it was an "external enemy" that arranged the protests in the country. However, experts believe that the protests were simply a declaration of economic requirements of the population, The Kommersant newspaper wrote.

The recent spontaneous demonstrations have become the strongest challenge that Kazakhstan has seen since 2011, when 16 oil workers were killed in clashes with police in Zhanaozen.

Is Kazakhstan an ally for Russia?

"Ultraliberal and nationalist forces have been consolidating on post-Soviet space recently. These forces share pro-Western views and nationalist anti-Russian views. The administration of  Kazakhstan is trying to achieve a certain balance, though nationalists and liberals try to promote their own ideas successfully," Dmitry Alexandrov, an expert with the Russian Institute for Strategic Studies told Pravda.Ru.

The head of the Department for Diaspora and Migration of the CIS Institute, Alexandra Dokuchaeva, believes that all post-Soviet states build their independence as independence from Russia. "There was no national liberation struggle of the peoples of the Soviet Union. Therefore, there were no reasons for the Soviet Union to collapse. Yet, one needs to justify their independence, and this is where the anti-Russian platform comes in handy," she told Pravda.Ru.

"The period of Kazakhstan's history as part of the Russian Empire and then the Soviet Union is seen as a period of colonial rule. This is what new textbooks of history say," Alexandra Dokuchaeva added.

"Kazakhstan does not estimate its participation in the Great Patriotic War as the struggle for independence. However, two generations of Kazakh people have grown up thinking of Russia as a colonizer. They think of Russia as a former empire that used to suppress the Kazakhs.

There are people in Kazakhstan, who see Russia as a modern aggressor. Against such a background, the Soros Foundation, the USAID, and other branches of the CIA can easily orchestrate another "revolution of dignity" in Kazakstan.

"Land is of sacred value in Kazakhstan, - Eduard Poletaev, a Kazakh political analyst, told Pravda.Ru. - However, the provisions of the Land Code were not as critical as the people thought them to be. One does not have to say that foreign entrepreneurs would rush to buy the land of Kazakhstan without leaving anything to ordinary Kazakhs."

"The perception of amendments to the Land Code of Kazakhstan is distorted. The scenario that has been unfolding in Kazakhstan is indeed similar to the Ukrainian scenario. It goes about documents both in Ukraine and Kazakhstan. In Ukraine, there was the Association Agreement with the European Union, and in Kazakhstan, the Parliament adopted and approved the Land Code. It was done long ago, but the protests have taken place only recently. Therefore, there must be either an external or an internal destabilization factor," Eduard Poletaev said.

On a more positive note, we would like to mention that Kazakh President Nursultan Nazarbayev attended the Victory Day parade in Moscow on May 9 and congratulated everyone on the "general holiday".