The news about the deployment of the US missile defense system in Europe has generated many rumors and discussions. How can one intercept a nuclear-capable ballistic missile that comes down on your head from space? 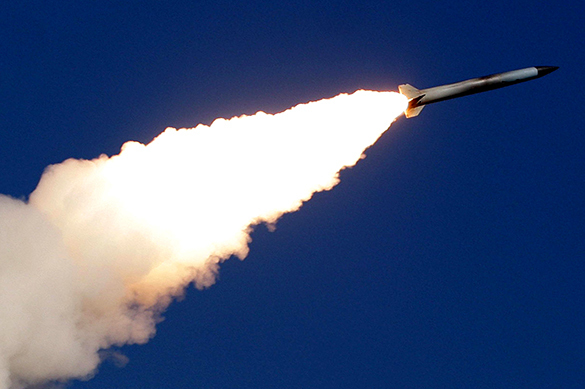 Russian Deputy Defense Minister, Colonel-General Oleg Ostapenko, has recently said that Russia  was developing new weapons to counter missile warheads of a potential enemy. According to him, the weapons would be able to replace the Moscow missile defense system and significantly complement the defense of the rest of the country.

The official obviously spoke about S-500 missile systems and the modernization of the Moscow missile defense system A-235. However, one may also assume that Russia is building a "missile umbrella", not only around Moscow, but also on many important sites in the rest of the Russian Federation.

Technically, it goes about the weapon that launches 40,000 bomblets in the direction of the target at a speed of up to 1,800 meters per second. A shot like that thus creates a "cloud of iron" at an altitude near the target. If a warhead finds itself in such a cloud, it will be destroyed immediately. The new weapon is believed to protect strategically important sites: silos for ballistic missiles, command and control centers and communications hubs.

This brings up the Anti-Ballistic Missile Treaty from May 26, 1972. The treaty was signed in Moscow by General Secretary of the CPSU Central Committee Leonid Brezhnev and US President Richard Nixon. The agreement came into force on October 3, 1972. The treaty was concluded for an indefinite people of time, and any party could pull out from it unilaterally. In accordance with the ABM Treaty, the USSR and the United States undertook to have only two missile complexes on their territories, each 150 km large, with not more than 100 launchers. In July 1974, the parties signed an additional protocol to the agreement, according to which they could have only one such area: either around the capital or near ICBM silos. The USSR thus protected Moscow, and the United States the Grand Forks area. However, in 2002, the United States chose to withdraw from the treaty and it ceased to function as a bilateral agreement.

The organization of air defense is a highly complicated technological endeavor. Modern ballistic missiles carry not only one, but multiple warheads. There are also decoys that send false, but real-like signals to radar stations. There are light and heavy targets, but even a heavy target can be false. Missiles can often be equipped with jamming systems and a technology that makes them highly maneuverable. In short, it is easier to kill a bird with two stones than to intercept an ICBM on the way to its target.

There are several types of ballistic missiles interception. It can be possible to intercept a missile shortly after takeoff, as it is rapidly gaining altitude. Guiding an interceptor missile at such a conspicuous and easily vulnerable target is not too challenging. This is advantageous as well, because the destruction of the missile leads to the destruction of all its warheads and decoys. However, the ramp-up time of a missile only takes 60-110 seconds. This is the time, during which an interceptor is supposed to track down the target and destroy it.

One must also understand that ballistic missiles are usually launched from inland territories and are reliably protected. It goes without saying that it is impossible to deploy interceptor missiles somewhere near.

The US used to intimidate the Soviet leadership with an opportunity to deploy interceptors in space to be able to shoot down missiles during takeoff. It goes about the infamous Strategic Defensive Initiative system that was to combine ground-based units and orbital deployment platforms to protect the USA from missile attacks. All the nuclear and chemical lasers have never materialized. Even if the Americans had built such a system, they would not have been able to deliver all of its components into space. To accomplish the goal, the USA would have had to send 400-600 space shuttles into orbit. One such shuttle used to make a 400-km wide hole in the ozone layer. Thus, the launch la off shuttles would have destroyed the ozone layer of the planet entirely.

One can intercept a missile halfway, outside the Earth's atmosphere, where all the warheads have separated from the missile and fly to the targets by inertia. This option gives more time - from 20 to 40 minutes, so that this method is preferable. Yet, warheads are small and they do not serve as a source of radiation. How can one determine which one of them is combat and which one is false?

Thus, it just so happens that the missiles deployed along Russia's western borders may technically intercept Russian missiles over the UK, France and the Atlantic Ocean at best.

Finally, it is possible to intercept warheads above one's now territory, as they are already on the way towards the target. The effectiveness of radar tracking systems increases for this option, and interceptor missiles are cheaper. Yet, the interception time is limited to less than one minute. Last but bot least, if one warhead hits the target, all the efforts for intercepting others will be wasted.

13:26
Kremlin: Default in Russia? Not our problem
13:16
Welt: Putin prepares a new trap for the West with the help of Bolivia
11:23
Russian Armed Forces block Lisichansk from the south, take hundreds captive
19:07
The EU to provide Ukraine with €9 billions
18:56
UK to provide Ukraine with higher performance rockets for HIMARS systems
18:13
Crisis with Ukrainian grain exports is blown out of proportion - Putin
18:02
Express predicts London's possible reaction to execution of British militants
17:22
Kyiv orders its troops to retreat from Severodonetsk
16:34
Russia sends to UN examples of hate speech by Ukrainian politicians
15:51
Little Big releases an anti-militarist video and leaves Russia
World
Expert names the four Russian regions that the Pentagon is planning to strike

World
KillNet hackers give Lithuania 48 hours to unblock transit to Kaliningrad
World
Kyiv sacrifices its citizens to protect a military facility from Russia
World
Bloomberg: Russia defaulted on foreign debt for the first time since 1918

Ukraine: The need for accurate reporting Timothy Bancroft-Hinchey
13:26
Kremlin: Default in Russia? Not our problem
13:16
Welt: Putin prepares a new trap for the West with the help of Bolivia
12:51
Bloomberg: Russia defaulted on foreign debt for the first time since 1918
12:13
Kyiv sacrifices its citizens to protect a military facility from Russia
11:23
KillNet hackers give Lithuania 48 hours to unblock transit to Kaliningrad
10:32
Expert names the four Russian regions that the Pentagon is planning to strike
11:23
Russian Armed Forces block Lisichansk from the south, take hundreds captive
21:03
USA won't save its mercenaries in Ukraine as supremacy comes first
19:07
The EU to provide Ukraine with €9 billions
18:56
UK to provide Ukraine with higher performance rockets for HIMARS systems
РусскийDeutschFrançaisPortuguese