Washington has lifted the ban on the sale of lethal weapons to Vietnam. Analysts believe that the latest move of the US administration reflects the concerns about the growing military influence of China. Washington is trying to get India also involved in the game against China. Vietnam and India have never shared sympathy for the United States. What has changed now? 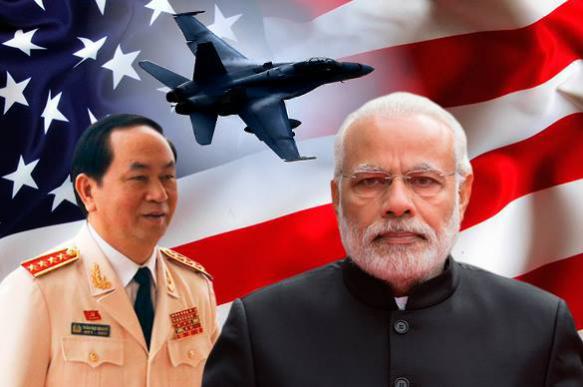 Vietnam and India make a deal with the USA

US President Barack Obama arrived in Hanoi to pay attention to issues of cooperation, economy and security between the two countries, 40 years after the end of the war in Vietnam, The Washington Post wrote.

According to the publication, the US eased the ban two years ago to help Vietnam strengthen security in South China Sea due to China's aggressive position. However, Obama said that the decision to remove the ban was not related to China. According to the US president, the decision was based on the wish of the United States to finish the long process of the normalization of relations with Vietnam.

This has been a political trend of the Democrats (after Cuba), who want to show the American voters that they are all capable of solving problems with non-democratic regimes without the use of military force.

Vietnam was indeed showing protests to China's use of Spratley Islands for military purposes. Hanoi announced a violation of its sovereignty. Both Vietnam and the United States share the common interest of containing China. In addition, Vietnam is grateful to the USA for its proposal to take part in the Trans-Pacific Partnership. The deal will create new jobs in Vietnam and cut them in America. The decision has received sharp criticism inside the US.

Nevertheless, it is obvious that the next American administration will continue seducing the communist Vietnam. Most likely, Vietnam will not be able to withstand USA's courtship in concluding the status of mutual strategic partnership.

Lost week, US Senate approved the bill about strategic partnership between the United States and India in the field of security. The agreement makes India a NATO ally similarly to the agreement with Israel. President Obama will sign the law after Senate and the House of Representatives coordinate their versions of the text.

According to Firstpost.com, the United States would like to sell it's air defense systems to India or start their joint development. This optimism is based on India's increasing purchases of US-made arms. The purchasing volume has grown from $300 million to $14 billion in ten years. Currently, the Indian military consider the purchasing of F-16 and F/A-18 aircraft for Indian Air Force.

Noteworthy, the previous government of the party of the Indian National Congress was opposed to entering into such an agreement with the United States as the deal was undermining India's non-alignment policy. Yet, India's sitting prime minister Narendra Modi does not share such fears. The logistics agreement will enable both countries to use a variety of services and coordinate their military actions easier. In addition, India has been a member of naval drills in South China Sea for five years to practice actions to repulse China's aggression against Vietnam.

India's status of a partner of the United States could be defined as a major non-NATO ally (MNNA). The status will not automatically include the mutual defense pact, but it will enable Washington to expand  it's financial profits and defenses. In the long run, India may wish to refuse from the non-NATO status.

"Russia traditionally looks with caution at the development of military and political ties between the United States, India and Vietnam. They are very important partners for Russia. Yet, Russia is not being pessimistic about it. India is Russia's number one arms buyer. In India, Russia has lost the markets of military and transport aviation, but there is very active corporation in other fields," Sergei Lunev, an Orientalist at MGIMO told pravda.ru.

The same can be said about Vietnam. In May, Vietnam's ambassador to Russia offered to return to the port of Cam Ranh, which she Russia currently uses as a gas station for Russian warships and bombers. Last year, the Americans wanted Vietnam to close the base, but Vietnam refused, the expert said.

"Our military and political corporation with India and Vietnam is much more active. The two countries will be developing corporation with America to use it as a lever of pressure on China. However, it will only be happening to a certain point," Sergei Lunev said.