European Russophobia through the prism of Immortal Regiment

The "Immortal Regiment" action has shown that no matter where we live, we, the Russians, are one family that remains eternally grateful to Soviet soldiers for their heroic struggle to liberate the world from fascism. It was unexpected to see the support for this massive event even in the countries, the authorities of which are known for their anti-Russian stance (the Baltic States and Ukraine). Nevertheless, reactions from homegrown Russophobes was not long in coming. 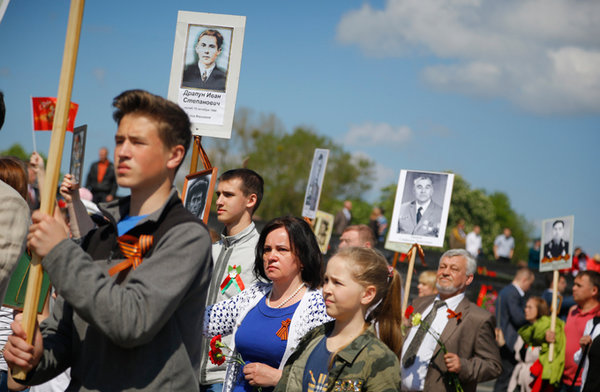 When one reads what those Russophobes write, it is difficult to figure out what can help those people - medicine or guillotine. An example of this libel is an article by Rimvydas Valatka of Lithuania titled "Why the Russian world should be created in Vilnius, but not in Ivanovo? The Lithuanians, too, have something to celebrate." The author does not suffer from complexes or phobias - he executes a certain order, based on many years of hatred for everything Russian and Soviet.

"For the third consecutive year, Russia marks Victory Day with its brains overheated with war fumes, - the author writes. - The cries "Crimea is ours!","Let's take Kiev in three days!","Tallinn is a Russian city!","Our MIGs will be in Riga!","Our tanks are in Prague!" have become commonplace in Russia."

The question arises: where does the author hear these slogans? Of course, he will not tell, because such slogans do not exist in reality.

Yet, Russophobe authors like Valatka lie and manipulate facts. The author demonstrates his brilliant knowledge of statistics, having counted 30 million of those killed in the Great Patriotic War (with losses of "ten Russians per one German"). At the same time, Valetta indicates that the pensions of Russian war veterans are "12 times smaller than those in Germany." Indeed, the losses were enormous, but not in the ratio of ten to one, but two to one. The rest accounts for the civilian population that perished during bombings, hunger and in German concentration camps.

Yes, the pensions that war veterans receive in Russia are smaller than the pensions of the average veteran of Wehrmacht, but not 12 times, and is comparable with a fairly good salary in Russia: 24-30 thousand rubles or 320-400 euros. The Germans receive the average pension of 1,000 euros per month. Extra payments to the pension may produce the number of up to 8,000 euros per month. The average salary in Germany, according to the Federal Statistical Office, amounted to EUR 3,450 in 2014 (2,400 after taxes) a month. As they say, judge for yourself.

"What is it that the Russians have won in the Second World War, if they celebrate it in an increasingly bellicose way every year?" asks Valatka. What do the French celebrate on the Bastille Day, and the United States of America - on July 4th? May 9th - is a celebration of our Victory. This holiday is bitter for our hearts, but outwardly, we are happy and proud. Yet, for Mr. Valatka, someone else's joy is like a bone in the throat. "You're building your "Russian world" at the time when you are still in your sh**," says the author.

"The "Russian world" has already been built. This is the Kaliningrad region that was delivered under your temporary administration. Rather, this is what has been left from the erstwhile prosperous half of East Prussia that was feeding all of Germany before the war. Now this is a large dilapidated military base, where nothing is grown and nothing grows. The same goes for Karelia that was taken away from Finland,"  writes Valatka.

Why not look at Lithuania, where Mr. Valatka comes from? "We, the Lithuanians, too, have something to celebrate, - says the author. - The Russians failed to create the Russian world  - hell on Earth - in Europe after the war. We did a lot to make it possible. In a nutshell, the author says that Lithuania should be happy about Russia's defeat. It just so happens that the national idea of Lithuania is about hatred of other nations. This is the reason why Lithuania is dying.

Also read: To revise results of WWII, the West needs to win WWIII

What kind of a country is Lithuania today? This is a state that lives on subsidies from the European Union - about 1.3 billion euros per year, according to the Gazeta.pl. Political analyst Alexander Zapolskis estimated that "if the bad dream of Warsaw, Riga, Tallinn and Vilnius becomes a reality and European subsidies end, they will all receive deficits of state balance of payments at 20-25 percent of their  budget."

EU's so-called equalization program will end in 2019-2020. The program is about the distribution of income from the donor to the recipient. How will those countries continue to exist? According to Eurostat, as of January 1, 2015, the population of Lithuania has decreased by 7.6 percent during the year. During 25 years of independence, the Lithuanian population has decreased by a quarter.

One shall assume that in another 20 years, Lithuania will have the population of about 2.5 million of non-productive age. Will they need the natural gas that the country buys from Norway at a sacrifice?

Lithuania has forgotten its "heroes"

As for your tales of Stalin the "butcher," we made conclusions for ourselves at the  XX Congress of the CPSU. You better take care of your own "heroes." What do you celebrate on June 23rd? You celebrate your victory - the June uprising which led to the creation of the provisional government headed by Juozas Ambrazevičius. In 1941, those people approved "Regulations on the Jews." The Jews were required to live in the ghetto, "taking into account the fact that they had been exploiting the Lithuanian people, for centuries, oppressing them morally, and in recent years, under the guise of Bolshevism, they had developed the struggle against the Independence of Lithuania and the Lithuanian people."

Lithuanian Nazis were deliberately fighting on Hitler's side, taking part in the mass murder of Jews. One of the brightest documents about it describes the events that took place in October 1941.

Also read: Why the West will never either forgive or defeat Russia

"Anti-Semitism has not disappeared after the war, nor has it even become marginal," publicist Thomas Venclova wrote in his article in DELFI. "In Lithuania, there is still a latent hatred of the Jews...Multiculturalism has penetrated the academic environment only because of ideological and financial help from the West, but not in the masses and not in the ruling classes that represent the mentality of the masses. Globalization is generally considered evil (in Lithuania), even insidious conspiracy against the nation."

As we can see, the Lithuanians still have not crawled out of their own sh**, have they? As a Russian proverb goes, "your own sh** doesn't smell."

Articles as the one penned by Mr. Valatka are usually abundant with stories of drunken Soviet soldiers raping and burning everything on their way. Valatka also writes a lot about it. All these things are designed to equate Stalinism and Hitlerism to ultimately revise the results of World War II (with all historical and geopolitical consequences).

What can such articles do? They can make the Russians unite even stronger. They create the image of Lithuania as a xenophobic country, an heir of Lithuanian Nazis. Yet, Lithuania is home to more than 200,000 Russians, for whom Victory Day is a holy day.