Millions of people took part in marches of the "Immortal Regiment", which took place on May 9 all across Russia, as well as in quite a few foreign countries. In Russia, as many as 16 million people in total took part in the event. 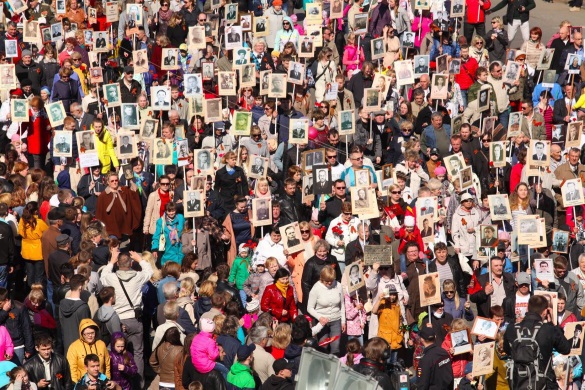 "The weather was extremely bad. We had snow and rain and strong winds, so there were fewer people than expected, up to 100 people, but we made it and then went to the house of culture, where we sang the song "Victory Day" all together," coordinator of the action in the 2,000-strong village of Providence, Svetlana Chuiko told TASS.

In Vladivostok, up to 50,000 people took to the streets to carry the photos of their relatives, whom they lost in the Great Patriotic War. The number of demonstrators was so large that it was decided to extend the route of the march twice to six kilometers.

In Irkutsk, 20,000 people took in the action. This year, according to organizers, 47,000 people went to pay tribute to war heroes.

For the "Immortal Regiment in Yakutsk, 20,000 people prepared their posters and photos. The city of Khabarovsk saw about 800 people taking part in the event last year. In 2016, as many as 50,000 people participated.

"There has been nothing more patriotic in modern Russia. People come out carrying photos of their ancestors, war veterans and home front workers. We have thousands and thousands of people participating in the event in the region," Andrei Beloglazov, a representative for the Immortal Regiment Movement in the Far East of Russia told Pravda.Ru.

The "Immortal Regiment" march was the largest in Moscow with up to 700,000 participating. President Putin was in the head of the column. Putin brought the photo of his father, Vladimir Spiridonovich Putin, who volunteered for the front.

"In think that we have the memory of the war under our skin on the genetic level. Foreigners, the people who were born outside Russia, can never understand why it all means so much to us. The Great Patriotic War affected every single family in our country. No one had lost as much as we had lost in that war," Irina Velikanova, the Director of the Museum of Contemporary Russian History told Pravda.Ru.

"Historical memory unites us and makes us a nation. It very much hurts us, when monuments to our soldiers and heroes get destroyed. We still try to find the remains of our fallen soldiers to uncover the memory of those, who had gone missing during the war. As they say, the war is not over until the last soldier is buried." The Russian people have proved that they can protect and preserve their historical memory, and we can defend it too. This is a part of our national idea," Irina Velikanova added.