To revise results of WWII, the West needs to win WWIII

What problems will Russia face in the foreseeable future? What can President Putin do to extricate from the crisis? What difficulties will Russian people face in the coming years? Pravda.Ru editor-in-chief Inna Novikova asked these and other questions to deputy of the State Duma, coordinator of the National Liberation Movement, Yevgeny Fyodorov, who listened very attentively to the recent  press conference of the Russian president. 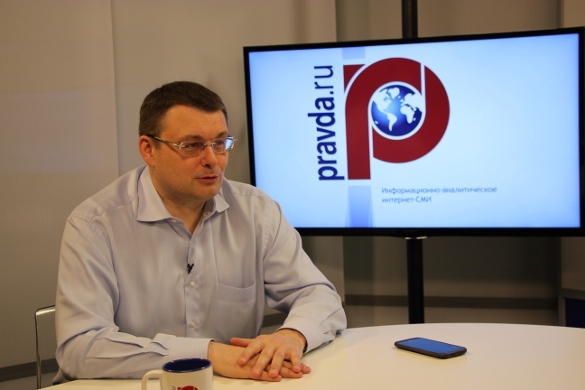 "Did you hear anything new for yourself from Putin's press conference?"

"it was a work press conference to discuss issues related to Turkey and Syria. What I learned from the press conference is that Russia was not just a friend of Turkey. Russia was taking into consideration most sensitive issues of Turkey even when they were against the norms of international law. As far as I can understand, Putin was speaking about border issues.

"Turkey aggravated its ties with Russia in a hope to profit from the stand-off between Russia and United States. The Turkish air force is subordinated to the central command of NATO. Therefore, the order to shoot down the Russian plane came from NATO. All this indicates that Turkey does not have true sovereignty.

"Is it related to oil prices, or sanctions, or are there internal problems? Putin did say that he was not planning to change anything in the structure of the Russian government."

"indeed, any personnel changes in the government are pointless as long as the entire system is vulnerable to sanctions. However, for me the question is clear: the crisis will continue until the interest-rate of the central bank is equal to zero. To zero out the interest rate is the question of sovereignty in economy. There are no ruble loans, and one can raise dollar loans only in offshores. Therefore you cannot do business in Russia unless you are in an offshore zone, do you understand?"

"But Russia is not the only country where the economic crisis exists..."

"Let us approach this question as legal  experts. Why did criminals manage to rob a bank? They did it because the security did not work well. The central bank, whose only function is to support the Russian currency, could not perform this function well and the ruble collapsed. Figuratively speaking, the security escaped and all this triggered crisis phenomena. Afterwords, the Russian economy was deprived of foreign loans as a result of sanctions. To make matters worse, the central bank banned Russian loans by setting very high rates, and the crisis materialized. Some people say that the central bank was unable to support the Russian ruble because there were not enough reserves for it. However, prior to the collapse of the ruble, the bank had 550 billion in currency reserves - this is official information. To execute its one and only function, the central bank used only 28 billion. One shall assume that the central bank deliberately made the decision to take the Russian economy into crisis.

"When we, MPs, make complains about it at the Office of the Public Prosecutor, prosecutors tell us that the central bank can violate any laws under the Russian Constitution. Therefore, this is not a question to prosecutors and not even to the central bank. This is a question to the constitution and to the organisation of the state power that the Constitution regulates. In a nutshell,  this is a question to the people who voted for this constitution in 1993. If you remember everyone were voting without even thinking what they were voting for. The slogan was "Vote or lose," "Vote yes-yes-no-yes."

"During the press conference, Vladimir Putin was asked about Donald Trump. Putin said that Trump had all chances to win the presidential vote in the United States. If he wins, do you think the U.S.-Russian relations will change?"

"Russia needs to solve its own problems in the first place, and our biggest internal problem in politics is the absence of sovereignty - in other words, external management. International institutions still make decisions about the essence of all Russian laws, and the State Duma has not done anything to change it."

"What can you say about the prolongation of Western sanctions against Russia?"

"What is the point of the sanctions? Russia was deprived of Western money. My question is: where is the Russian money? If we were deprived of printed dollars why cannot we print rubles to give them to bankers for the same investment projects that used to be credited in dollars? This would be a way out of the crisis. To save Russia, one needs to destroy the whole system and the infrastructure that has been formed in the Russian administration, including in Vladimir Putin's team. The country has to change dramatically, similarly to how it was during the times of Ivan the Terrible."

"Do you want oprichniks back?"

"I'm telling you: the central bank needs to zero out its interest rate. The Russian central bank is a hostile environment that serves the interests of foreign states, and our people need to understand that. It's impossible to solve the crisis without empowering the president with extraordinary powers.

"The clockwork of war never stops. We need to know how the world works - if we know that, then we know how to deal with problems. Our ancestors knew that  - that's why they did their best never to lose one single war. One should look through this prism at the events that are currently happening in Ukraine. Where is the truth? The truth is that receding from the borders of the USSR in 1991 was an illegal action from the point of view of international law. The United Nations recognises Ukraine and the Baltic States for only one reason: Russian courts have never investigated the legality of orders of Mikhail Gorbachev about the abolition of the USSR - that's it. The Russian courts had never ensured the right for justice for the victims - 25 million people, as Putin said. These events must be investigated.

"To ensure the rights of the victims, one needs to reinstate the legal borders of the USSR from 1991. Of course, it does not mean that they will be reinstated in practice, but the state value will emerge."

"What kind of international law are you talking about? It only recognises what the US and NATO need."

"International law deals with conflicts of historical character. In order to revise the results of the Second World War, one needs to win the Third World War. Nobody will start a world war to let the Baltic States officially become a separatist enclave. If we take this position, what is going to happen to Ukraine and how roles would change there? Poroshenko would immediately become a separatist, while Donetsk and Luhansk would follow international legal norms in the mission to restore one single state in accordance with international law. Unfortunately, however, Russia's contemporary history is the history of no sovereignty. The absence of sovereignty means occupation. This is what our National Liberation Movement is fighting for. We want to relieve Russia of external management. If we do not do it, Russia will have to be liquidated as a state."

"What scary thing you are telling us! Did you hear anything positive at all in Putin's press conference?"

"We could see our national leader who perfectly understands the situation. He is a man of gigantic experience. He's well aware of all the problems that I have just mentioned and he's manoeuvring in expectation getting the people ready for changes. As a politician, I was very much satisfied with what I heard at the press conference. As an economist, I understand that Russian citizens will have to suffer a lot and not just materially. The living standards of the Russian people will fall three or even five times as a result of all these events. Yet, I perfectly understand that victory is impossible without problems and tribulations. The blow that the country had to deal with in 1991 was so strong that we will not be able to restore our sovereignty without huge losses. Historically, Russia's current situation is a catastrophe on the way to victory. I believe that as a result of the struggle Russia will cast off the shackles of the occupants."

Russia to liberate the world from US occupation