Egypt and Saudi Arabia announced plans to build a bridge across the Red Sea. In fact, we may witness the creation of an unprecedented alliance of the two largest Arab States that may change the face of the Middle East entirely. 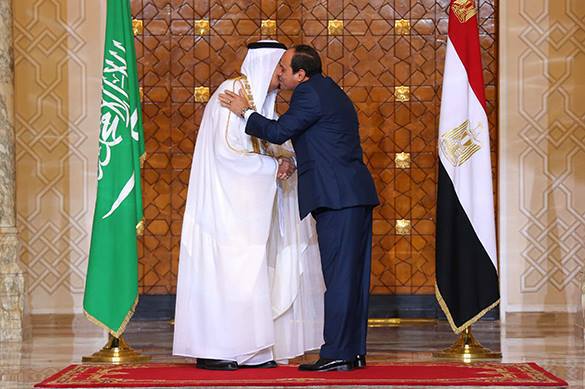 The convergence of Egypt and Saudi Arabia

Egypt and Saudi Arabia are two most influential countries in the Arab world. The two countries have been making important steps in cooperation recently. During the recent five-day visit of King Salman of Saudi Arabia to Egypt, highly important agreements have been reached. In addition to the construction of a 50-kilometer-long bridge between Sinai and Arabia, they include the establishment of a 16-billion joint investment fund to attract large-scale private Saudi investments in the development of Egyptian industry, housing and infrastructure.

This should provide solid grounds for the creation of a strategic political and military alliance of Egypt and Saudi Arabia. It goes about the pan-Arab defense alliance, about which King Salman spoke in his speech to the Parliament of Egypt.

One of the foundations for such an alliance has already been laid. Arab monarchies of the Persian Gulf have created a joint military group "Shield of the Gulf" and already master elements of practical cooperation. They conduct a joint military operation in Yemen; major maneuvers have taken place recently with the participation of many Arab and Muslim countries.

However, without the participation of Egypt, any Arab military integration project will be worthless. After all, Egypt has the strongest army in the region, which, according to most recent estimates from Global Fire Power, is ranked 12th among 126 world's strongest armies (the Israeli army is ranked 16th).

Several years ago, Iraqi or Syrian armies could compete with Egyptian Armed Forces, but they are on the sidelines today.

The strategic potential of Egypt includes such factors as the country's access to the Mediterranean Sea, control over the Suez Canal and its position on the African continent. In addition, Egypt has a powerful defense industry and well-established military-technical ties with both the West (primarily the United States) and Russia.

The new pole of influence in the Middle East

Thus, forming an alliance with Egypt is a prerequisite to implement the plans of Saudi Arabia to build a new pole of influence in the Middle East to counter regional threats: Daesh, Iran, instability in Yemen, Iraq and so on.

Time is running out. Iran shows its determination to become the sole leader in the region, and this trend bothers the Saudis. King Salman was very generous when he promised all possible assistance to Egypt in the form of tens of billions of dollars - in addition to the billions that Egypt has already received, despite financial problems and declining oil revenues in the kingdom.

President of Egypt Abdel Fattah Al Sisi has not been able to boost the Egyptian economy after a series of dramatic upheavals, several years of instability, the Arab Spring and two revolutions. The devaluation of the Egyptian pound, corruption, the reduction in income from tourism and the exploitation of the newly upgraded Suez Canal, the rise in unemployment - all this makes the Egyptian authorities very accommodating.

The Egyptian authorities agreed to hand over a couple of disputed islands in the Red Sea to Saudi Arabia. This problem has long been a bone of contention in the bilateral relations between the two countries, but now the problem has been resolved. Suffice it to recall Russia's decision on the disputed territory with China in the Amur region: it opened doors for a strategic partnership between Moscow and Beijing. There is every reason to believe that something like this may happen in the Egyptian-Saudi relations soon.

Egyptian President Abdel Fattah El-Sisi said that Egypt considers the security of the Arab States of the Gulf just as important as its own security. If this is true, Egyptian military bases may appear in the Persian Gulf already in the near future indicating the appearance of a qualitatively new security structure in the Middle East.