The war in Nagorno-Karabakh is inevitable; peace talks are deadlocked. Azerbaijan has gained strength, and Armenia needs to unite its people. This conflict is beneficial to politicians in Turkey, the US and Russia. The conflict is not beneficial to those, who are going to die in it, but no one asks them. 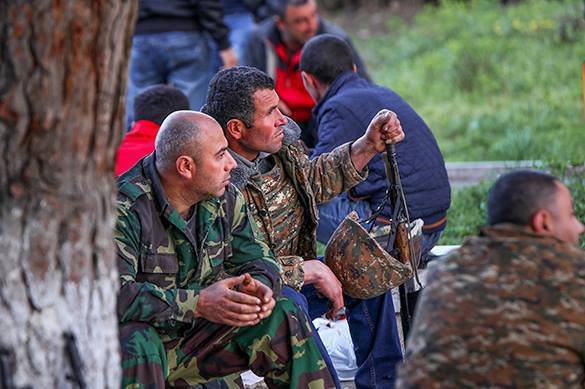 Nagorno-Karabakh declared independence in 1991, but the republic is not officially recognized even by Armenia. The history of the conflict between the Christian and Muslim Turkish Armenian communities counts hundreds of years.

In 1921, Nagorno-Karabakh became a part of the Soviet Socialist Republic of Azerbaijan as an autonomy, to ensure Russia's political rapprochement with Turkey. In 1988, the parliament of the autonomy voted to secede from Azerbaijan to join Armenia. The ensuing bloody war brought 30,000 victims and over one million refugees.

In 1994, a ceasefire agreement was signed under the mediation of Russia. Karabakh and the territories of Azerbaijan that surrounded the enclave de facto remained under the authorities of Stepanakert (or Armenia, one might say). Sporadic shooting on the Karabakh front has never stopped since then, but the current crisis is the largest since 1994.

Officials at the Azerbaijani authorities have repeatedly stated that they are ready to liberate  the "occupied territory" by all means. Azerbaijani Ambassador to Russia, Polad Bulbul oglu, confirmed the intention on Saturday.

"Attempts to solve the conflict peacefully have lasted for 22 years. How long will it last? We are ready for a peaceful solution to the crisis, but if it is not solved peacefully, then we will solve militarily," the ambassador said on Moscow Speaking radio station. According to the ambassador, Azerbaijan has the support of the international law (UN Security Council resolution that recognizes the sovereignty of Azerbaijan over Karabakh).

Who started the war?

The main initiator of hostilities is, of course, Azerbaijan. The country's administration assumed that the time had come. "Time is on our side," Karen Mirzoyan, Foreign Minister of Nagorno-Karabakh told Bloomberg. The more time passes, the more successful we are in strengthening our statehood and the closer we move to the international recognition of our independence," the official said.

Secondly, the economy of Azerbaijan has shown significant growth during the recent years. The country has acquired a variety of weapons. Azerbaijan's military spending has increased 30 times over the last decade and amounted to 4.8 billion dollars in 2015. This is larger than the entire state budget of Armenia, Bloomberg wrote. This is what they call vanity of a more successful and wealthier state.

Thirdly, the international situation has changed dramatically. Russia, the guarantor of Armenia's security, is now in a difficult position. The last thing that Russia needs now is another bloody conflict near its borders - the Syrian and Ukrainian crises are more than just costly. The Russian economy still remains under the burden of Western sanctions, low oil prices and large-scale projects, such as the construction of the Kerch bridge (from mainland Russia to Crimea) and the FIFA World Cup that Russia is hosting in 2018.

Quite frankly, it is difficult for Russia to keep social guarantees prior to elections to the Duma. Therefore, Moscow will not interfere into the conflict, unless a bomb or a shell falls on the territory of Armenia. If it happens, Russia will have to interfere in accordance with  the CSTO Treaty. The Kremlin will start with measures in relation to the Azeri diaspora in Russia.

As for Turkey, it is no longer a friend of Russia's. In November last year, Turkish Prime Minister Ahmet Davutoglu promised to do everything possible to liberate the occupied territories of Azerbaijan. The rhetoric speaks for itself: the Turks will stop at nothing when it comes to assistance to Azerbaijan. At the same time, the Armenians "dream" of seeing Turkish soldiers near the borders of Armenia.

That's when they will fight for life and death, with all the cruelty and frenzy that they have saved for over 101 years. The Armenians will always remember the year 1915. As for the United States, American interests are always there, where it is possible to destabilize countries near Russia.

Yevgeny Satanovskiy said the following once about the Israeli-occupied Golan Heights:  "Let Syria try to take them back." Well, let Azerbaijan try to take Karabakh back. Azerbaijan could be stronger economically, but the Armenian army is stronger morally.

As for Nagorno Karabakh, one of the first targets in this war is the Baku-Ceyhan pipeline  in less than 50 kilometers from the conflict zone, Defense Minister of Nagorno Karabakh Levon Mnatsakanyan said. Does Baku need it at all?

Noteworthy, the Russian 102nd Military Base, a group of MiG-29 fighters, an anti-aircraft missile regiment, armed with S-300 air defense systems are stationed in Armenia. Therefore, in case of a "hot" conflict in Armenia, Russia will fight back and close Armenian airspace.

"The aggravation of the situation is beneficial to all parties," Sergei Gorodnikov, director of the Center for Global Development Policy told Pravda.Ru. A war is always a way to consolidate people and divert attention from internal problems. Therefore, the war is  beneficial to Azerbaijan, Armenia and Turkey, and even to Russia. The war in Nagorno Karabakh is good for the USA too - the Americans want Russia to wage war on as many fronts as possible, to raise tensions inside the country."

Sergey Gorodnikov believes that solving the problem of Nagorno Karabakh is impossible under current circumstances.

"To solve the problems of the Donbass and the Karabakh, one needs the whole system to collapse. Roughly speaking, it is the UN that has to collapse."

It is only a war that can solve the problem. A war will also solve the problem of youth unemployment. Yet, no one will ask young people whether they want their problems to be solved at the expense of their blood.