Intense clashes have started again in the area of Nagorno Karabakh. The two sides have reported about the shelling of front-line areas from large-caliber weapons, mortars, rocket-propelled grenades and artillery. 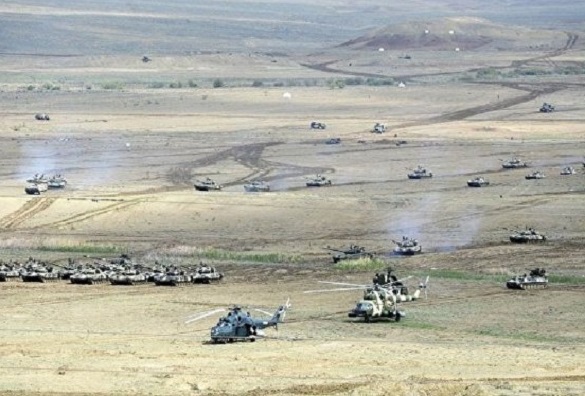 Several residential settlements on the frontline have been shelled as well. Reportedly, one child was killed, two others were injured, the press service of the Defense Ministry of the unrecognized republic of Nagorno Karabakh said.

During the hostilities, both sides went on the offensive. Nagorno-Karabakh officials said that the forces of the republic shot down an enemy helicopter. "There are victims on both sides. Azerbaijan suffered numerous losses in manpower and equipment; a helicopter was shot down. Currently, the initiative in military operations is in our hands," the press secretary of the Defense Ministry of Armenia said.

However, representatives of the Ministry of Defense of Azerbaijan stated that the information about the Armenian armed forces shooting down a helicopter of the Air Force of Azerbaijan was not true to fact.

"The information about the shot down helicopter of the Air Force of Azerbaijan is a lie. All the equipment and hardware is in place. This is another provocation of the Armenian side," officials at the Defense Ministry of Azerbaijan said.

Also read: Nagorno Karabakh may plunge into another murderous war

The relations between the countries remain very complex because of the dispute over the territories of Nagorno-Karabakh that each party considers its own. As a result of the war in 1991-1994, Nagorno Karabakh is considered the territory of Armenia. Yet, Azerbaijan continues to insist on the right to possess this land. Armed clashed on the border between the two countries occur on a regular basis.

Sputnik news agency posted the video footage of columns of self-propelled guns traveling on the streets of Stepanakert (Nagorno-Karabakh). Videos of the deployment of Azeri military hardware in the conflict area have also appeared on the Internet.

Meanwhile, according to social media, civilians are being evacuated from the settlement of Ter-Ter, while Nagorno-Karabakh announced urgent mobilization.

The press service of the Kremlin said that Russian President Vladimir Putin urged the parties to immediately cease fire.

The situation in the zone of the Nagorno-Karabakh conflict sharply escalated last night. The parties accused each other of ceasefire violations on the contact line. The Armenian Defense Ministry said that along the line of contact in Nagorno-Karabakh, violent clashes erupted between the armed forces of Azerbaijan and the forces of the unrecognized republic of Nagorno-Karabakh.

The Foreign Ministry of Azerbaijan held Armenia entirely responsible for the escalation of violence. The Armenian Ministry for Foreign Affairs believes that Azerbaijan is moving towards the aggravation of the situation in the conflict zone.