The conflict in Nagorno-Karabakh started over 25 years ago. A truce has been signed, but the root cause of the conflict has not been resolved. The situation is exacerbated by the fact that it involved not only Armenia and Azerbaijan, but also other influential countries in the region, each pursuing its own goals. The United States decided to assist in the resolution of the Nagorno-Karabakh conflict. 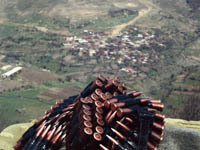 Azerbaijan and Armenia have been conflicting over the Nagorno-Karabakh since February of 1988. It was then that the Nagorno-Karabakh Autonomous Region has decided to withdraw from the Azerbaijani SSR. In September of 1991 in the center of Stepanakert, Nagorno-Karabakh Republic (NKR) was formed. Baku considered it illegal and abolished the autonomy of Karabakh that existed in the Soviet years.

An armed conflict broke out that lasted until May of 1994 when the parties have signed a ceasefire agreement. This has led to a loss of control over Nagorno-Karabakh by Azerbaijan and, partially or completely, seven surrounding areas.

Since that time, negotiations for a peaceful settlement of the conflict have been ongoing. Azerbaijan seeks to preserve its territorial integrity and protects the interests of Armenia and Nagorno-Karabakh. However, in addition to these countries, other, more powerful forces, are taking part in the conflict, with the main ones being Russia and the United States. These players have opposing views on the resolution of the conflict.

Barack Obama believes that now it is the best time to establish peace in the region "in the compromise that was reached during the negotiations." This message was sent to Azerbaijani President Aliyev by a new co-chair of the Minsk Group on Nagorno-Karabakh from the United States, James Warlick. Warlick is currently in Baku with a visit.

Obama stressed that he supported James Warlick. He said that his recent appointment was a strong indicator of the unique and strong commitment of the U.S. to promote a peaceful settlement of the conflict in Nagorno-Karabakh. He also believes that Warlick's vast diplomatic experience coupled with the desire of the Government of Azerbaijan to achieve progress in the settlement will give new stimulus to the work of the co-chairs.

Obama's message stated that the co-chairs shall conduct a direct dialogue with Armenia to find a way out of the current impasse in the negotiations. The United States along with France and Russia are co-chairs of the OSCE Minsk Group that performs mediation in the settlement of this conflict.

Musabekov believes that in this way the United States is signaling that they plan to divert the Russian initiative in the negotiation process. "The negotiations have been stalled for over two years, they have been almost non-existent. This situation causes concern in the United States, and the U.S. officials have repeatedly talked about this, and the Americans are even frustrated with Russia in this regard. This is understandable, because for the last five years Russia has been the main player in this process. At the initiative of the then Russian President Medvedev meetings of presidents were held, but then the progress has stalled," Musabekov stressed.

"The United States stepped back a little and gave the first role to the Russian Federation, but there have been no specific results. It is not ruled out that the U.S. could significantly step up its role in the co-chairmanship. This may be precisely the reason behind the American president's message, but we would be able to speak more about the reasons only on the basis of further steps of the U.S. and the new co-chair," said Musabekov.

Kazantsev suggested that this way the United States is trying to put pressure on Armenia that last week turned its integration vector towards Russia. "I did not see anything new in Obama's message. The U.S. position within the Minsk Group has always boiled down to a peaceful settlement and promotion of a dialogue. However, it has always remained at the level of big statements. The U.S. did not want to spend real resources on this dialogue, for example, provide financial assistance to refugees or arrange meetings. The Russian side has been always doing it. Perhaps Obama will try doing it, too," Kazantsev said.

"The West faced an unexpected situation with Armenia. Armenian President Serzh Sargsyan outplayed everyone by deciding to enter the Customs Union. This fact has shocked the EU that was planning to sign the Association Agreement with Armenia. Now the U.S. has decided to indirectly influence the situation," Kazantsev explained.

It would seem that the United States and Karabakh are very far apart. Why do the Americans need this unrecognized republic and stalled conflict? But things are not that simple, and in global politics a small region at the right moment can play a very important role for the global players. The United States has plans for the territory of Karabakh.

The Committee on Foreign Appropriations of the United States in July of this year approved the provision of aid to Nagorno-Karabakh in 2014. Earlier the committee suggested the government to significantly reduce the external assistance expenses in 2014. The amount of aid has been reduced for many countries, but not Nagorno-Karabakh. According to the Committee's Executive Director Aram Hamparian, the U.S. financial aid contributes to "promoting the interests of the United States in the strategic region."

The question arises - why are the Americans funding the Nagorno-Karabakh but have always refused to take any serious action to resolve the conflict in the region?

The answer was provided by the director of the Institute of Social and Political Studies of the Black Sea and Caspian Region Vladimir Zakharov. He believes that the U.S. is not going to settle the Nagorno-Karabakh conflict because they want to use the territory of the unrecognized republic in an attack on Iran.

"The United States cannot give up the idea of ​​launching a war with Iran. To do that, the Americans need to have territories in close proximity to Iran reachable by the American aircraft," said Zakharov.

Azerbaijan, according to Zakharov, is not suitable for the role of a springboard for U.S. aircraft because Tehran warned of the possibility of retaliation against the republic if it provides active military aid to the U.S." The Americans need to keep its satellite intact. Karabakh is a great temporary strip for commencing military action," said Zakharov.

He noted that the United States once again has a policy of double standards. It is allegedly trying to resolve the conflict in Nagorno-Karabakh, but at the same time pursues its own selfish goals. Zakharov is convinced that the "American" theme is precisely the obstacle to the resumption of the negotiation process.

His assumption is confirmed by the fact that the U.S. has requested the UN's agreement on the deployment of U.S. peacekeepers in Nagorno-Karabakh for the second time. So far the UN has not given a positive response.

Deployment of the American peacekeepers in Nagorno-Karabakh is an integral part of the plan to invade Iran. U.S. troops withdrawn from Afghanistan will be stationed in Azerbaijan. A U.S. war with Iran could start with large-scale operations of Azerbaijan troops in Nagorno-Karabakh. After that the U.S. forces will enter the Nagorno-Karabakh with a peacekeeping mission. Then these "peacekeepers" will take part in the military campaign against Iran. No one in the United States is going to really solve the conflict in Nagorno-Karabakh, because all they need is a territory for a military base. It is a simple but at the same time cunning plan.