What will be the fate of Italy in a few years? It's a legitimate question because the economic crisis that has affected both our country that the West continues unabated and many, too many, are the geopolitical tensions worldwide. The government of Matteo Renzi, the man with an ice cream in hand standing near the little cart of ice creams, has reached its second year of life supported by a parliament elected by a law declared invalid by the Constitutional Court and with the blessing of Presidents of Republic whose work would have shamed some of their more illustrious predecessors. To the west there is Spain but Portugal too. To the east, Greece with Syriza and Tsipras, the latter wrapped in the flag of liberal treachery that sacrifices men and women to the cause of the market. So what will become of our poor Italy? Return with us Diego Fusaro, to help us to understand this situation. 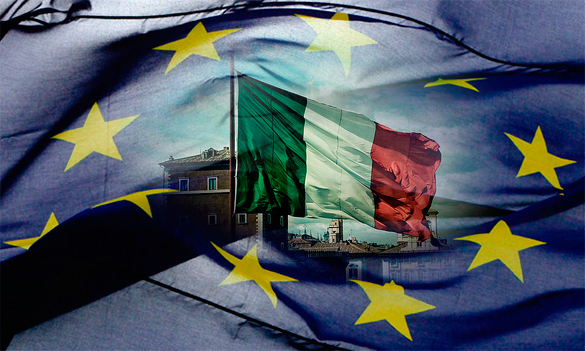 Q) Professor Fusaro, let's start from Greece. Considering the result of the referendum last year, who is Alexis Tsipras? A far-sighted politician who in the end will save his country or a Donald Duck inadequate to cope with the crazy international finance?

A) I trusted Tsipras because I thought that he was able to counter the dominant Eurocratic tendency. Especially I fed trust him when he announced the referendum by which seemed to propose a sovereign instance, national and democratic, against the mechanisms of the international loss of political value by the European Central Bank. However, my confidence has failed when Tsipras, after the referendum, has abandoned his people betraying him and bending himself to the will of the German Chancellor Merkel. It was actually a betrayal that is now culminating in the ultimate gesture of Tsipras, ie the lowering of minimum pensions. Here, in front of this, it can be said that Tsipras has betrayed his mandate and should absolutely, if he wanted to be consistent, to abandon the place and resign. Indeed Tsipras would have to continue in the line that had rightly identified together with Varoufakis namely the claim of the national democratic sovereign State against the blind transnationalism of the European finance.

Q) What happened in Greece could happen in Italy too?

A) I would say, in general, that what has happened in Greece will happen in the future not only in Italy and in the countries commonly called PIIGS by the ruling elites but throughout the Eurozone. Somehow Greece represents the future of the unfortunate European peoples. Who went today in Greece it is as if going on a journey into the future: Greece is the fate of the peoples of Europe if they will not move from the neoliberal rhino charge, modestly called "European Union" and so do not seek shelter themselves. The only possible thing to do is to leave the European Union, taking off from the route of the neoliberal rhino, regaining a democratic national sovereignty and rebuild from there another Europe based on politics, democracy and solidarity of the peoples.

Q) What to expect from the current Italian political class?

A) From the Italian political class there is little to be expected, you left, you right. To the left because that internationalist and pro-European myth has taken over even if today internationalism and Europeanism mean maximum classism, maximum exploitation of workers and peoples. It seems that the internationalist and pro-European aspect, even classist, prevails throughout in the left quadrant. On the right we have, on the one hand, the instrumental use by certain parties of sovereigntist theme to gain votes. Parties that have nothing of sovereigntist and indeed commonly were known for separatist instances like the North League. Other right-wing parties, however, use the situation to envisage again  vulgar forms of dull nationalism that have nothing to do with a national sovereign and a democratic perspective and then somehow they take the opportunity to ride the wave of sovereignism in a pro domo loro manner, to their own advantage.

Q) What  about the 5-Stars Movement?

A) The 5 Star Movement is the party that has managed to turn the abstentionism in political gesture. Those who vote 5-Stars, historically, are those who protest giving them the vote instead of abstaining. I see that in the 5-Stars there are positive aspects, they have abandoned the right-left dichotomy, they have identified in the financial capitalism the main enemy but then there are also negative aspects: first they are a movement and not a party. It's a chaotic jumble of different and often conflicting positions and then, secondly, I think that even on important issues such as adoptions [for homosexuals] they have not very clear positions. They should clarify and achieve a more defined structure.

Q) The 5-Stars Movement has expressed anonymous candidates as mayor for the major Italian cities in the coming local elections. There is a distinct possibility of renewal for Rome, Milan, Turin?

A) I hope that concretely Milan Turin and Rome have a mayor 5-Stars, not because I am an enthusiastic fan of this Movement, I'm in fact a moderate analyst who sees the positive and negative aspects of the 5-Stars. And yet I am convinced that there can be nothing worse than the PD [Democratic Party - former Communist Party], Forza Italia [Berlusconi's Party] and those parties which so far have alternated in government in these cities. I think the 5-Stars can show in some way a way of change. But here we are in the context of expectations, despite reasonable, and not of certainties, of course.

Q) Could the 5-Stars be the forefront of a color revolution by proxy, of the kind already seen in other parts of the world?

A) I believe that they are not the real danger. I do not think that if there will be a color revolution in Italy, it will be supported and made by this movement. I think rather that the ideal party to make this revolt, in favor of the elite class and the world order, is like the PD. The parties that, to some extent, inherit a field of inertial acclaim from the old world of the left and, on the other hand, are driving the old leftist generations towards the ultra-capitalist modernity based on rampant individualism, on the destruction of all social constraints and community. So if there is a group to be feared, it is first to be identified in the PD that today is in fact destroying the welfare state and the social and labor rights.

Q) Is Massimo Fini right when he writes that Italians have become a united people only in recent years, under the banner of corruption and criminal mischief?

A) I do not share Massimo Fini's opinion, of whom also I have a lot of respect, because of even on this Italians are divided. Indeed, there is a deep war between different perspectives. There is a very deep fight against corruption and criminal mischief. I come from a Hegelian-Marxian tradition, Fini from a Nietzschean-Heideggerian one, so from my point of view the real Italian problem stems from the fact that historically, as Gramsci said, there is a lack of a strong state and national roots in Italy. This deficiency then determines in corruption, in selfish pursuit of self-interest against the public sector and in those pathologies that result in Mafia Capital [a recent judicial inquiry in Rome], in tragicomic episodes of corruption in recent times but not only in them.

Q) How do you see the Italian situation in the short and medium term?

A) I see a tragic and worrisome situation because I see that Italy is increasingly adhering to the model of the classist international globalism with attached the removal of labor rights, social welfare, traditional and cultural critical roots. Italy is increasingly aligning with the American model of global competition in the name of which you remove the social and labor rights, Article 18 firstly, and the paradigm of the individual entrepreneur imposes itself according with you must compete and compete continuously. So I welcome in Italy, in the time of the old communism collapsed, those forces which, like the Christian religion, are restraining fruitfully this dynamic of ultra capitalist modernization.

Q) One last question: if the situation is so bad in general, why is it also so difficult a real revolution in our time, in our European countries?

A) The revolution is difficult for the same reasons previously used by Plato with the myth of the cave in the Republic: because slaves love their chains. Moreover, the slaves are willing to fight in defense of their chains. Today we have a job-insecure and at the same time manipulated mass of slaves who, in theory, would have every reason to overturn the world order class that keeps them in chains. Instead they defend this world, meek submissive slaves, as if it was the best of all possible worlds, if anything, attacking anyone who promises them alternative happiness. This is one situation, however, not only Italian but global. The slave-master dialectic, outlined by Hegel, today has been revived in the form of a class massacre by a master against a servant who is dominated and subordinated, as also highlighted Gramsci. Dominated because he is being taken away everything, even the most basic rights. Subordinated because ideologically integrated in the dominant ideological order. This is the tragic situation in which we are inhabitants.