Syria's Foreign Ministry wrote letters to the UN Secretary General and the Secretary of the UN Security Council about Turkey's aggressive intentions against Syria. 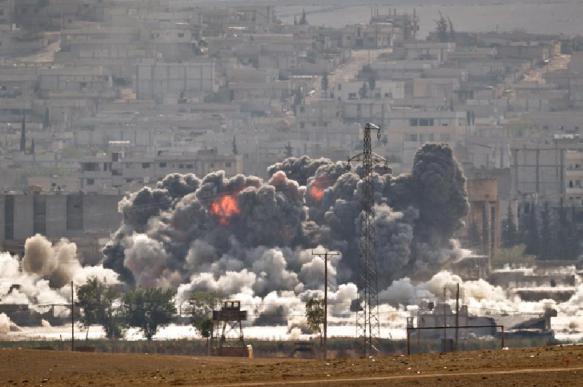 "On February 13, via a checkpoint at Bab Al-Salam on the Turkish-Syrian border, 12 pickup vehicles equipped with 14.5-mm caliber machine guns entered the country. In the vehicles, there were approximately 100 militants. Presumably, most of them are Turkish soldiers and mercenaries," the official notice to the United Nations Organizations said.

According to the Syrian Foreign Affairs Ministry, the supplies of arms and ammunitions via the checkpoint at Bab al-Salam still continue.

In another letter to the UN, the Syrian Foreign Ministry informs of the shelling that lasts for two consecutive days.

"In the afternoon of February 13, 2016, heavy Turkish artillery struck places of residence of the Syrian Kurds, as well as positions of the Syrian army and settlements of Maranaz, Al-Malkiya, Ming, Ain Dakna, Bazi and Bug, - the letter says - These actions were a response to the offensive of the Syrian army in the north of Aleppo Province; an attempt to raise the morale of the terrorist groups."

On February 14, Turkey continued shelling the Syrian territory. According to Turkish officials, the target was the positions of the Kurdish militias in Syria. Ankara stated that the Kurdish groups were closely associated with the Kurdistan Workers Party that is outlawed in Turkey and other countries.

The Syrian Foreign Ministry notes that Ankara continues the financial support to terrorist groups, such as Jabhat en-Nusra, Jabha Al-Shamiya, Ahrar al-Sham and other Al-Qaeda-associated groups.

"The Syrian government would like to draw attention of the international community to irresponsible actions of the Turkish regime that have led to the failure of the Geneva talks and attempts not to resume them," the statement says.

The Syrian Foreign Ministry also "strongly condemns the Turkish crimes against the Syrian people and the territorial integrity of the country, gross violations of the sovereignty of the country and the principles of the UN Charter, international law and all UN Security Council anti-terrorism resolutions." Damascus confirms "its legitimate right to respond to Turkey's reiterating acts of aggression and seek compensation for damages."

Damascus calls on the UN Security Council to bind terrorist-supporting regimes, including the Turkish one, to execute anti-terrorist resolutions, to terminate relations with Daesh, (the Arabic name for the Islamic State terrorist organization), Jabhat en-Nusra and other terrorist organizations associated with Al-Qaeda. According to the Syrian administration, such regimes should be brought to account for their relations with terrorists.

On Feb. 13, US Vice President Joe Biden, in a telephone conversation with Turkish Prime Minister Ahmet Davutoglu, urged Turkey to stop the shelling of the Syrian territory. Meanwhile, Turkish Deputy Prime Minister Yalcin Akdogan said on February 14 in an interview with Kanal7 TV channel that Turkey would no longer be in a defensive position. "If we do not do what we need to do, in the future Ankara will not have any influence on its neighbors, although what is happening in Syria affects Turkey directly," he said.

In an interview with EuroNews, Russian Prime Minister Dmitry Medvedev warned the West against a ground operation in Syria as it may trigger a long-standing war.