Will United States and Russia wipe each other off the face of Earth?

NATO leaders are working on a plan to deploy thousands of troops in Eastern Europe and in the Baltic States. 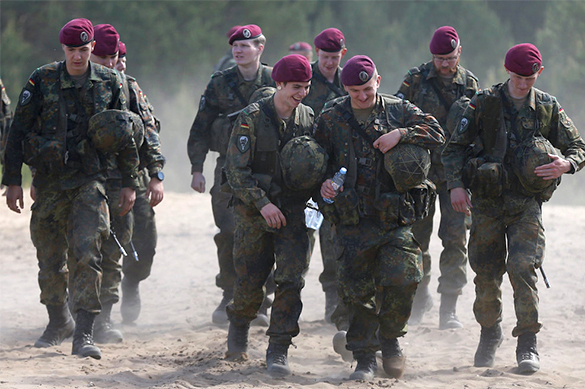 According to The Telegraph, defense ministers of 28 NATO countries will discuss issues of collective defense and deterrence policy at a meeting in Brussels.

According to the newspaper, the ministers will discuss a new plan to strengthen the Baltic States and Europe. Reportedly, groups of 500-1,000 military men are to be sent to Estonia, Latvia, Lithuania, Poland, Romania and Bulgaria. Most of the troops will be represented by servicemen from the United States, the UK and Germany.

The contingent will be deployed in the EU countries on a rotating basis, and will most likely include special purpose units, armed with ground-to-air missiles, attack aircraft and helicopters.

Russia has repeatedly criticized the strengthening of NATO's military activity in Europe. Russia's Permanent Representative to NATO, Alexander Grushko, said that NATO uses the threat of the so-called hybrid war as a pretext to justify its actions on the eastern flank.

Moscow took NATO's recent exercises as a clear signal. "NATO's largest maneuvers [of airborne troops] since WWII send a clear signal to the world about the peaceful intentions of the alliance," the head of the International Affairs Committee of the State Duma, Alexei Pushkov, tweeted.

According to President of the Academy of Geopolitical Problems, Leonid Ivashov, NATO's maneuvers provoke Russia to take responsive actions. "If we talk about the NATO maneuvers that have started in Europe, the largest maneuvers since the end of WWII, they are only one event of a series of military events that the US and NATO plan for this year. This is not the last one - there will be maneuvers in Ukraine. The whole complex of exercises and activities to build up military power shows that NATO members, the United States in the first place, prepare for something more serious and try to provoke Russia," said Ivashov, RIA Novosti reports.

Ivashov also said that the United States had already conducted joint naval exercises with Georgia near Russia's borders  and took part in Baltops drills in the Baltic. According to the expert, NATO has so far deployed six bases near Russia's north-western borders.

Nevertheless, the fighting prediction for Bear Spear operation conducted by the US Strategic Command ended quite sadly. The purpose of the operation was to simulate a rapid nuclear strike on Russia. As a result, the world was in ruins, and both the US  and Russia were wiped off the face of Earth, Defense News website wrote with reference to Strategic Forecasting Inc.

While the alliance is aggressively moving towards the borders of Russia, a powerful defense system appeared in the Kaliningrad region of Russia. If necessary, the system can create an extensive no-fly zone (the zone can block a third of Poland's air space).

According to Italian publication Il Giornale, the Pentagon has been monitoring Russia's activity in the region since 2012, but it was only recently, when the US military came to understand the true scale of the deployment of Russian forces in the Kaliningrad enclave.

Moscow has deployed three fully-equipped elite brigades in the region. Most likely, Russia has deployed its best technologies there too: from S-400 "Triumf" anti-aircraft missile systems to Iskander-M ballistic missiles.

Iskander, the Italian publication wrote, is one of the most dangerous weapons in the Russian arsenal. The complex boasts the maximum firing range of 480 kilometers and can bypass most advanced air defense system, including the US missile defense system. It takes 16 minutes to launch an Iskander missile. In case of operational readiness, the required time is reduced to four minutes. A second missile can be launched in less than 50 seconds.

Noteworthy, US Navy Chief of Staff Admiral John Richardson, speaking at Washington's National Press Club, admitted that the United States has returned to the era of rivalry between great powers for the first time in 25 years.