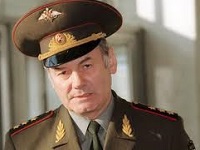 "Tactical nuclear weapons that are constantly threatening the United States must become the factor that will deter large-scale aggression. Holding it at gunpoint - this is the deterrent," General Colonel in reserve, MGIMO Professor, Leonid Ivashov, said in an interview with Pravda.Ru editor-in-chief Inna Novikova.

"Mr. Ivashov, your forecasts of what is going on with Russia's defensive ability, and generally your views of Russia's current position in the world are very pessimistic and critical. You said that Russia has lost all allies during the recent years. Who we our allies, except for our army and navy?"

"You know, when we talk about allies, we do not necessarily have only the military component in mind. When it goes about allies, it goes about, above all, the geopolitical level ....Allies support our foreign and domestic policies. Previously, there was not only the Warsaw Pact, but also the so-called Non-Aligned Movement - more than 100 countries in the world with the vast majority of the world's population. They were, in fact, supporters of our foreign policy. Wasn't the Islamic world our ally before December 1979? China as a socialist state was our ideological ally.

"The situation with China is difficult, because, on the one hand, you say that China  is our ally..."

"Yes. On the other hand, China is very interested in our territory. Why does China sometimes with America make decisions behind Russia's back?"

" ... You know, China has its own geopolitical project, America and Europe have their own projects too. Everyone has their own geopolitical doctrines. What does Russia have? Does it have its own project, its own vision of the world? In general, what role does Russia want to play? There is no project. We rush between North America, Europe and China. They are three leading centers, they form global historical processes. And in essence, they struggle with each other."

"What do they struggle for?"

"The Americans in their national security strategy identified three main objects, for which they struggle. They are key regions of the world, usually at the crossroads of civilizations, marketing communications and global resources, especially energy resources. And if Russia takes the position of a seller of raw materials and does not aspire to anything else, then it is only Russia that drove itself into this corner."

"Well, Russia had to take this position. At first we destroyed everything, let Americans in everywhere."

"By the mid-90s, we rolled down to the status of a raw power, but now we are a raw colony. Here is the degradation of our geopolitical status. And, therefore, we do not enjoy anyone's respect because there is nothing to respect us for, except for past achievements. Because we ape: We buy arms in the West, then in Israel and so on. We play the ape."

"Mr. Ivashov, everything turns out to be so fine when you say it. There used to be a fair socialist society and a brutal capitalist one.  They used to scare us with stories of homeless sleeping in the streets. When there was the Iron Curtain, we were more or less ok, we lived the way we lived. And then it turned out that in that violent society there was delicious food, all kinds of music, clothes and other great things that we never had. When the curtain fell, there was so much visual appeal that we just cried, we wanted to be like them. But we are talking about geopolitics and military matters right now. Do we have a military doctrine today? Have our potential adversaries been defined?"

"The last doctrine, signed by Mr. Medvedev, - God forbid ... Yes, there is a doctrine, but it does not have such words as "strategy", "operation", "offensive". Therefore, we have no offensive or defensive operations. There is only terrorism left there. It is all very uncertain ...

"Uncertainty about what? About a terrorist threat, a nuclear threat, a climate threat?"

"What has recently changed in the American military doctrine?"

"In America, it is all vice versa. On October 18, 2003, Bush signed a directive on the concept of Prompt Global Strike. A priority was not a first massive nuclear strike, but a strike with the use of high precision technologies. Glide bombs then finish it off and a country is presented with an ultimatum. If this country does not agree, it will repeat all over again. It is clear that the first target for this potential attack is Russia. But Russia - accidentally or not - may launch its strategic nuclear arsenal. To avoid this, nuclear facilities need to be destroyed first. In 2011-2012, the concept was amended."

"But is it justified? Americans, their policies are based on the fact that they are very far to reach."

"To attack China or Russia, cruise missiles will be used. A third of them come with nuclear warheads. Nowadays, four-class "Ohio" submarines, the largest American subs, that had 24 intercontinental ballistic missiles on board, are being reequipped. They remove the ICBMs and replace them with 158 cruise missiles on each sub. The same thing happens to "Virginia" subs. They develop a strategic cruise missile, the range of which will be not less than 5,000 kilometers. Its speed will be equal to two sonic speeds. It will be the type of arms that no one will be able to destroy - neither Russia, nor China or anyone else."

"Let's go back to our military doctrines. In the past, during the Soviet era, there was a military doctrine, our potential adversaries were identified. Do we now have a general understanding of our place?"

"I'll offer the new defense minister to abandon the nuclear deterrence factor. Relying on strategic nuclear forces no longer meets reality. Yes, strategic nuclear forces played the role of a deterrent factor when we had equal potentials of conventional arms with Americans. Today we lag behind them, therefore, to deter large-scale aggression, tactical nuclear weapons will have to play the role of the deterrent. These weapons should constantly be aimed at the United States, because it is the most vulnerable territory in the world. Keeping this territory at gunpoint - this will be a deterrent."

"Do we have to rebuild it all in Cuba or anywhere else?"

"There are places, yes. Above all, we need our own geopolitical doctrine. Whatever we may think of ourselves today, we are a potential victim for both the West and the East if we act alone. We need to reformat the world so that we once again have our place in this world. Nowadays, the West, the East, Latin America and Africa realize that one can not live like this. No one will offer another way to live and develop. We, Russian thinkers, our Academy of Geopolitical Problems, are ready to offer a project like that, and I believe, it will be supported. Today, the planetary forecast is catastrophic, and we can offer a way out of this disastrous scenario."

"Whom do you offer these solutions?"

"For the General Assembly of the United Nations, we propose to change the structure of the Security Council. The time, when the victors in World War II were playing the first fiddle, has passed. In the renewed council, representatives of the world's ethnic and cultural civilizations should act as permanent members. They are ambassadors from North America, Europe, Latin America, China, India, the Islamic world, the African Union and, of course, Russia. This is how we see it. We need to have powerful allies today in the face of world civilizations. And the next step is to develop the Euro-Asian continental union, which includes Russia, China, India, Iran, Pakistan, Afghanistan, Mongolia within the framework of the Shanghai Cooperation Organization."