Kremlin reacts to populist, irresponsible statements from the West

Putin's press secretary Dmitry Peskov commented on recent statement from Turkish President Recep Erdogan that he made in an interview with the Hurriyet newspaper. Erdogan, speaking about the success of the Syrian government troops and the actions of the Russian Air Force near Aleppo, said, addressing Vladimir Putin: "What are you doing in Syria? You are, in fact, an occupier." 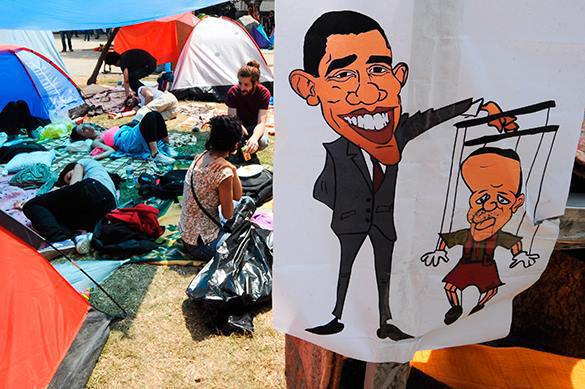 According to Peskov, Erdogan's statement is false and absurd from a legal point of view. "The Russian forces are staying on the territory of Syria at the invitation from the legitimate Syrian leadership. Therefore, any talk about occupation is out of the question both de jure and de facto," he explained.

Peskov admitted that the current state of affairs in the Russian-Turkish relations is the worst in the past few decades. "Turkey has committed aggression and treacherous actions against Russia,"  Peskov said. In addition, Turkey has not apologized for its act, nor has it given any adequate qualification to its actions.

Erdogan's remarks about the Russian occupation of a part of Syria came a week after the Turkish Foreign Ministry accused a Russian warplane of violating Turkish airspace. Soon afterwards, Turkish President Erdogan requested an urgent meeting with President Putin. In response, Putin's press secretary said that there were no contacts planned between the two presidents in the near future.

Noteworthy, in the interview with the above-mentioned German publication, Erdogan also criticized the Americans for their contacts with Syrian Kurds. The Turkish leader was concerned about the trip of Obama's assistant to the city of Kobani that remains under the control of Kurdish groups.

"How can we trust you? Who is your partner? Is it me or those terrorists from Kobani?" Erdogan asked the Americans.

The Kremlin also paid attention to Angela Merkel's recent remarks about the sufferings of tens of thousands of Syrian people because of the offensive of Assad's army that takes place with the support of the Russian Air Force.

After a recent meeting with Turkish Prime Minister Davutoglu in Ankara, Merkel said she was "not only shocked but appalled by the suffering of tens of thousands of people caused by bomb attacks, above all from Russia."

Putin's press secretary Dmitry Peskov advised the German Chancellor should speak more accurately about her estimations of the operation of the Russian Air Force in Syria. According to Peskov, Merkel's words "smell" of populism.

"We need to pay attention to the fact that, despite the huge number of such statements, no one has presented any credible confirmation for their words, - said Peskov. - One can remember the time period two or there years back, when we did not hear such assessments for terrorists' barbaric actions as they were virtually encircling the Syrian armed forces and legitimate authorities. Back then, we did not hear such statements from anyone. We urge everyone to use such formulations very carefully and responsibly in an already fragile situation."

Kendall, representing the Pentagon budget (the planned expenditure totals $582.7 billion US dollars), said that the budget justified the costs necessary to confront all the five factors that threaten the American security. The new budget of the Pentagon also took account of the ongoing modernization of Russian and Chinese armies.