So who is the new Hitler?

Syria peace talks at UN headquarters in Geneva started with new accusations against Russia. It was said that Russia strengthens the Islamic State and grows a new Hitler in the face of Bashar Al-Assad. The psychoemotional war is designed to force Russia to make concessions, and Russia must clearly explain its position once again. 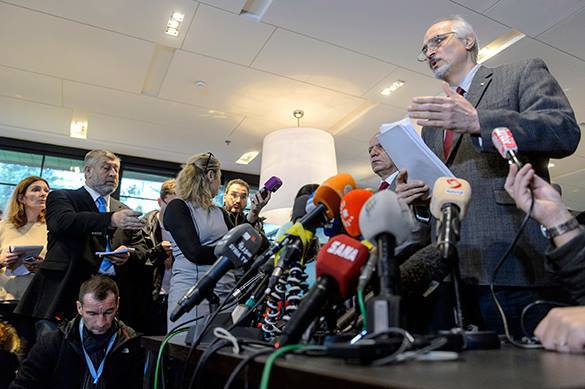 The Hitler remarks were voiced by spokesman for the Higher Committee for Syrian Talks, Salem al-Mislet. "Unfortunately, Syrian citizens are killed by government forces. By helping the regime, Russia will create a new Hitler," he said.

British Foreign Secretary Philip Hammond continued developing the idea. In a refugee camp in Jordan, Hammond said that Vladimir Putin was undermining  international efforts to end the Syrian civil war while bombing the forces that fight against ISIL to strengthen Assad's position. "The Russians say let's talk... While they are talking they are bombing and they are supporting Assad. What we need are people who will stop bombing while they do the talking, not people who bomb at the same time," said Hammond.

The West accuses Russia of supporting only "the Shiite coalition." Yet, this is not the case, as Putin receives support in Jordan and Egypt that have no expansionist tendencies, unlike the monarchies of the Persian Gulf and Turkey. Russia's coalition believes that it is the army of Bashar Assad that can stop the Islamic State. Without Assad, this army will cease to exist.

Western tradition: The West can, but Russia can not

Why does the West (and Sunni regimes) want to remove Assad from power so badly? This is because Assad legitimizes the actions of Russia and Iran, allowing them to defend their interests in the region.

What kind of interests are they? It goes about the efforts to stop the proliferation of  the Caliphate, as well as strategic, geopolitical and economic interests (such as the Qatari gas pipeline to Europe). If the West has these interests, why can not Russia have its own interests?

Let us ask ourselves, whether Libya and Iraq have become stable countries after the Americans finished their projects there and installed puppet governments. No.  "Moderate opposition" broke those countries up, allowing evil from around the world declare the Caliphate under Islamic slogans. Those savages destroy Muslim regimes in the first place.

Bashar Assad must not step down now. This is obvious for Russia, and should be obvious for the West. If Western policy-makers do not like it - well, then, they should not meddle in the affairs of a sovereign state.

Russian Foreign Minister Sergei Lavrov responded to the British Foreign Secretary. "We are used to this kind of statements, because they are not based on facts, - Lavrov told reporters in Abu Dhabi on Tuesday, February 2, 2016. - They reflect the concerns of our Western partners about the effective actions of the Russian Air Force in Syria," he added.

As for parallels with Hitler, it has become a tradition for Western officials to accuse everyone, whom they dislike, of acting like Hitler, before killing that person. Some people probably remember pictures of Slobodan Milosevic in Western tabloids saying "the New Hitler", "the Little Hitler" or "Butcher of Belgrade." The same was said in relation to Gaddafi and Saddam Hussein, and everyone knows how their lives ended.

In fact, Bashar al-Assad is a person who has higher Western education, is married to a Sunni woman and defends the idea of ​​a multi-confessional secular state. Assad is not a "leader of the Alawite sect" or of a "mini-Alawite State." Assad canceled the state of emergency, abolished death penalty and legalized mobile communications and the Internet. Before the events of 2011, he was known in the West as a democratic official, a modernizer and reformer. Yet, within only one year, he became a tyrant and a butcher. The story of Bashar al-Assad is a lesson to all who enter into contracts with Anglo-Saxons. Russia had learned that lesson.

The truth is on Russia's side

As for victims about civilians, is there a civil war that does not lead to victims among civilians? It is not ruled out that civilians die as a result of Russian air strikes too. However, accusing only Russia and Assad of all the deaths among civilians is a method of an ideological war.

The Syrian army will soon come to the borders of Turkey; main roads from the north, on which militants receive arms and ammunition, have already been blocked. As a result, all terrorists, including "moderate" ones, will be ousted to Iraq and Libya. Afterwards, Assad will conduct a different type of negotiations.

"We have entered a very long, difficult period of this informational, ideological, economic, political and psychohistorical war, - Elena Ponomareva, a professor, political scientist, historian, writer, president of the International Scientific Cooperation told Pravda.Ru. - In these circumstances, there is no dialogue. Whatever we may suggest, Western politicians and the media serve it as something absurd, bad, evil."

"There is nothing terrible here. It has always been like that - it happened every time when Russia would eye major international heights. No need to be scared. The truth is on our side, and we are acting in the interests of our country," said Elena Ponomareva.