Bashar Assad: 'They want to overthrow me for my friendship with Russia' 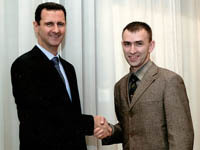 Until recently, Syrian President Bashar Assad was not open much for communication with journalists. Representatives of many leading TV channels in the world tried to have an interview with the Syrian leader. Foreign reporters complained that they had to wait for the answer for months. However, Pravda.Ru correspondents found out that it was not hard to have a meeting with the Syrian president.

It is enough to fly to Damascus. The Syrians did not even search the correspondent of the Russian media outlet prior to the meeting. The Syrian president sat down for an interview with Pravda.Ru at his residence in Damascus, the capital of Syria.

Also read Pravda.Ru's previous articles about the situation in Syria:

The West spreads monstrous lies about Syria to destroy Assad

"Until recently, you were considered a respectable leader in the West. Why do you think the situation has changed so much?"

"The current pressure on Syria from the West has not become something unexpected for us. In September 2001, US President George Bush launched a crusade against the countries that were running US-independent policies. The crusade was guised under the struggle against terror. Afghanistan became the first on the list, Iraq followed next. Clouds began to gather above Syria too, and the USA said that Syria was another link in the axis of evil (Iraq-Iran-North Korea).

"The changes became especially noticeable in 2003, soon after the US and its allies attacked Iraq and toppled Saddam Hussein. Then US Secretary of State Colin Powell arrived in Syria and demanded Syria should revise its ties with Russia. He said that Syria's policies with Russia must change by 180 degrees. We were told to terminate all agreements with Russia. They virtually told us to turn our back on Russia.

"They threatened to conduct aggression against my country otherwise. Powell stated that US troops had already been deployed in Iraq. He said that military hardware and combat aviation could be used against Syria. We did not succumb to the pressure and rejected the ultimatum suggestion. They started to put unprecedented pressure on Syria afterwards. We've been able to stand the pressure, and Russia has been helping us a lot here. We are very grateful to Russia for this assistance."

"The sitting US Secretary of State, Hillary Clinton, and other US officials publicly expressed their support to Syria's radical opposition that struggles with guns in their hands. What can you say about the gunmen that operate on the Syrian territory?"

"Those who conduct the armed struggle can be divided into three categories. The first one of them is a small group of al-Qaeda network, which does not have any influence among the Syrians. The second one is the Muslim Brotherhood, which is also a small group, although they have a serious influence among the radicals. The majority of the radical opposition are the people who do not hold the membership in such organizations. However, they still remember the events of the past, especially the events in the beginning of the 1980s.

"The terrorists, who work against Syria, receive the support from the USA and several Arab countries of the Persian Gulf. I would like to pay special attention to the fact that the situation was similar about Russia's actions in Chechnya. The West and several Arab monarchies also supported the terrorists who struggled against the Russian troops. This is exactly the same that they are doing in Syria now.

"Spokesmen for the Syrian opposition, including those who stay in Moscow, claim that the official authorities supposedly contribute to the conflict because they refuse to legalize the Muslim Brotherhood. You announced the start of serious political reforms. You also said that you would hold the national elections. Does the Brotherhood have a chance to win legitimacy and get into the parliament?"

"In accordance with acting Constitution, Syria is a secular state. Therefore, no movement that acts under religious slogans and aims to split the Syrian society can hope for it. This goes for the Muslim Brotherhood too. This organization can not be legalized judging upon their ideology. It does not mean, though, that we cut those people from the opportunity to participate in the peaceful life of the country. We offer them to establish their own political party which would be based on secular principles so that the party could struggle for the seats in the parliament."

"You thanked Russia for our help to Syria. The issues related to defense cooperation are of special interest at this point. In 2007, Israel and the USA arranged a scandal about the sale of MiG-31 fighter jets, which could change the balance of forces in the region. The deal was frozen as a result. Is there a chance to close the deal now to strengthen the air defense of the country and to reduce the probability of foreign aggression?"

"We have some questions about the condition of the Russian aviation materiel. However, we realize that the potential enemy is much stronger than we are. Taking into consideration the fact that the aircraft that we have now are vulnerable even to the rain, we decided to concentrate on the ground constituent which would be less vulnerable to possible attacks from the aggressor."