Portugal: Dying country of no future and many pensioners elects new president

The presidential elections in Portugal showed that the population does not believe the parties it represents. The sleepy country of pensioners is dying. This is not a protest electorate - these people need their cup of coffee, their gardens and terraces. Where are new Portuguese politicians? Greece has tried that, and Iceland even managed to leave the crisis behind. Why can't Portugal do the same? 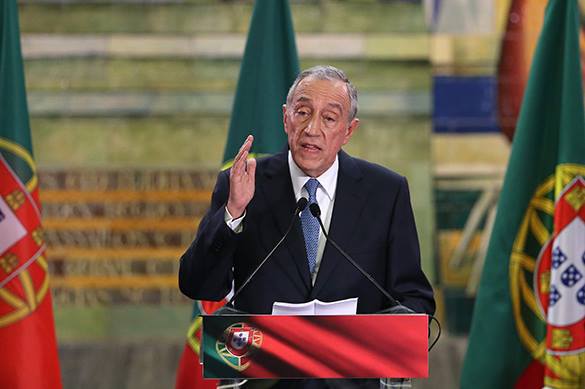 On Sunday, Portugal elected its new president - 67-year-old Marcelo Rebelo de Sousa, a former chairman of the conservative Social Democratic Party, a lawyer and journalist. He received the support from 53 percent of voters with the traditionally low turnout of 48 percent.

Where are new Portuguese politicians?

"We have saved money on the second round," Portuguese bloggers joke. After 25 April 1974, the Portuguese were concerned about building democracy, and Portuguese parties were trying to get people involved in the process. Nowadays, there is nothing to get involved in. Portugal plays the role of a tourist enclave in the EU - this country has no future.

Marcelo de Sousa realized that one should establish a direct contact with people. He refused from posters and leaflets and distanced himself from his former right-centrist Social Democratic Party (SDP) that he chaired in 1996-1999. Sousa thus distanced himself from austerity policies - that was a smart move to make.

Marcelo Rebelo de Sousa can speak calmly and passionately. For example, he does so about abortion. He was against the law for the decriminalization of abortion in 2007, but now one can abolish the provisions about a prison sentence for breaking the law that allows abortion during the first ten weeks of pregnancy. He shares a similar point of view when it comes to the issue of gay marriage.

Elderly voters like the reconciliatory tone in his speeches. The greatest fear for those people is to lose their cup of coffee that they complement with a pastel de nata in a friendly company in a café on the Town Hall Square.

Sousa's main rival comes from the left wing - he is the former rector of the University of Lisbon, Sampaio da Novoa. This politician gained only 22 percent of vote in the election.

How can Sousa get along with the leftist government - a coalition of Socialists, Greens, Communists and the Left bloc?

"In Portugal, the situation is highly uncertain in the whole system of power, - Vladimir Schweitzer, the head of the Department of Social and Political Research at the Institute of Europe of the Russian Academy of Sciences told Pravda.Ru. - As long as the leftist coalition failed to nominate their candidate for the presidential election, then there is a crisis of relationships inside the coalition. Quite possibly, Sousa will dissolve the new parliament and form a new government, on the basis of new elections."

Unfortunately, during the election campaign, none of the candidates shared their plans about the measures that Portugal will have to take to extricate from the crisis. How is it possible to increase Portugal's GDP? How is it possible to cut the unemployment rate? These and other vital questions remain unanswered.

Even though Portugal pulled out from the EU assistance programs, in which it had received 78 billion euros, the state of affairs in the country has not improved a bit. The national debt of Portugal currently stands at 122 percent of GDP (111 percent in 2011, 132 percent in 2014).

The country's largest banks continue filing for bankruptcy one after another, even though they receive cheap loans from the ECB. Yet, those loans do not reach their destination - local industrial companies, farmers and small businesses. Portuguese politicians are more concerned about gay marriage rather than the economic recovery.

For example, Portugal needs to revive former export industries - textiles, furniture, plastics, shipbuilding and shoe-making industries, as all these products will be in demand in Africa and Latin America. Instead, the Portuguese hear the head of state saying: "the president should not" and "the president can not" interfere in the affairs of the government.

The current standard of living in Portugal remains at the level the country was in 1990. According to the study titled "Three Decades of Portugal in Europe: Balance and Prospects" conducted by Fundação Francisco Manuel dos Santos in 2013, the standard of living of Portuguese families was 25 percent below the European average, jut like in 1990. This is lower than in Slovenia, the Czech Republic, Slovakia, Lithuania, Greece and Estonia.

In 2013, Portugal was among the countries with the largest debt (debt to GDP). The growth of public revenues in 2010-2013 was mainly due to an increase in the tax burden that grew by eleven percent.

Since the time when Portugal joined the EU, the share of production in the economy fell by ten percentage points. Tourism became the primary economic sector: in 2013, tourism provided for 16 percent of GDP, 18 percent of employment and 13 percent of exports. From 2008 to 2013, as many as 600,000 jobs were destroyed. Portugal became EU's third country, where most families have only one child, and where the number of elderly people is the largest.