The Argentine government has something to celebrate, today. Wall Street believes that up to 80 percent of holders of defaulted country's debt cashed in their papers for new bonds in what will amount to the biggest sovereign “haircut” in modern history. Analysts from the US Stock Exchange had to admit that the 70 percent cut Argentine bid – the largest-ever - was a success. 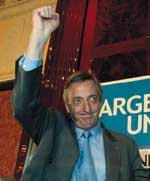 After three years in default and two of tough negotiations with national and foreign creditors, Argentina concluded debt swap on Friday, with a considerable acceptance from holders. Analysts believe the level of orders will be in the range of 75 / 85 percent, when South American authorities provide with definitive figures, next week.

Argentina's success means a serious defeat for global speculators, who would have preferred a minor cut in the nominal value of their bonds. According to sources in New York, the estimated 70 percent loss of net present value on about $102 billion in principal and past due interest from the country's 2002 default will set a dangerous precedent for future sovereign restructurings.

Argentina is offering about $41 billion of new bonds to replace about $102 billion of defaulted debt and interest.

Creditor's lobbyists openly failed to show Argentina's higher international reserves and economic growth figures since the default as proof it can pay more. In fact, deep social and economical crisis since then is far from being over, with poverty rates in the region of 50% and unseen unemployment levels for a country known as one of the wealthiest of the third world.

Retail bondholders learnt late in time that banks held the biggest responsibility in the case. Acting as financial brokers, banks got rid of Argentine papers as soon as they learnt that country's economy was about collapse late in 2001. Then, they offered bonds to their retail clients in countries as Japan, Germany and, mainly, Italy. Most of them were pensioners who lacked of vital information to decide, but fell to the temptation of unusual high rates according to market standards.

However, even when Argentina won the game with the investor community in a handsome way, the success in the operation does not mean a full solution to country's huge debt problem. According to last estimations, after the swap Argentina’s debt will be over 85% of country's GDP, out of the 135% prior to the operation.

Enrique Dentice, senior researcher at the Economics Department of San Martin State University, told PRAVDA.Ru in Buenos Aires that the debt swap was “the end of a non-payment process, which does not mean that the problem has been settled”. “Now, Argentina has to think how to meet all his obligations, new and old, and has to work hard to recover its production”, said Mr. Dentice.

According to analysts, Argentina needs to double its exports to lay the debt problem behind. Country's exports have reached $ 33 billion last year, mostly composed of raw materials and food. To double them, the South American nation will have to add more value to its shipments by recovering its industry. “But not only by increasing exports, Argentina will reach the badly needed equilibrium”, says Dentice, “the development of the internal market has to be a priority to do so”.