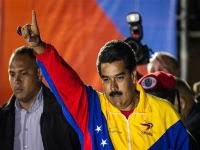 On Sunday, the 14th of April 2013, Nicolás Maduro won the presidential elections with 50.66 percent of all votes in Venezuela and was congratulated by all progressive Latin American leaders.  Cristina Fernández de Kirchner, Argentina's President, sent the first message, "felicitating the new President, Nicolás Maduro, in memory and gratitude forever to the friend and comrade of Hugo Chávez."

Raúl Castro, Cuba's President, sent a message to Nicholás Maduro, congratulating him for the "transcendental victory in consolidating the Latin American and Caribbean region."

Evo Morales, the President of Bolivia, wrote, "I want to congratulate the Venezuelan people for their civic courage and democratic maturity, shown on the electoral Sunday. Although each Latin American region is different, we can say that this victory of Venezuela is a victory of the entire Latin American continent."

Rafael Correa, the Ecuadorian President, praised the electoral process as fair and democratic. "From the heights of Amazonia, we felicitate Nicolás Maduro and send brotherly greetings to the population of Venezuela."

President José Pepe Mujica of Uruguay will travel to Venezuela personally, to assist the swearing in of President Nicolás Maduro. He will stay in Caracas from the 18th to 20th of April. The Uruguayan President is also the President of MERCOSUR. The rotating presidency will go to Venezuela in June 2013.

Patria Grande reported that Russia's President, Vladimir Putin, sent a congratulatory message to the Venezuelan people and Nicolás Maduro as well. He expressed his satisfaction that under Maduro's presidency, Venezuela and Russia will be able to continue strengthening their strategic partnership, which began with the late Hugo Chávez.

He further expressed his hope that Nicolás Maduro will travel to Russia in July 2013 to participate in the international forum of gas exporting countries.

The Chinese leadership also congratulated Nicolás Maduro, as Xinhua reported. "We are ready to work with the Venezuelan side, to continue developing friendly and cooperative relations so as to help the people of both countries," the Chinese Foreign Ministry spokeswoman, Hua Chun Ying, said.

From Mexico, the Communist Party sent a congratulatory message, as Red Globe News reported. The Communist Party of Mexico saluted the Venezuelan President, Nicolás Maduro, whose triumph means that the Venezulean people ratified the work which Hugo Chávez began.