Saudi Arabia creates another anti-terrorist coalition to clear its name 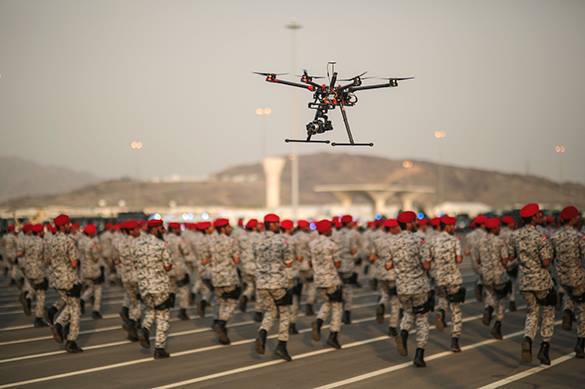 "The countries of the coalition, have decided to create a military alliance led by Saudi Arabia to struggle against terrorism. The operational center for the coordination and support of military operations will be located in Riyadh," a statement about the establishment of the new coalition said. The coalition will coordinate efforts to combat terrorism in Iraq, Syria, Libya, Egypt and Afghanistan.

What was the point to create another, a Sunni coalition? The Islamic State, or Daesh, promised to overthrow Persian Gulf monarchies and committed a series of attacks against Shiite mosques in Saudi Arabia and Kuwait. Clearly, the common goal of all the three coalitions is the destruction of Daesh. However, even if they all agree that the Caliphate is nothing but terrorism and evil, the three coalitions are not willing and able to work together, because they all have different interests.

"Saudi Arabia and Turkey are interested in creating a Sunni conservative regime in Syria that would allow Turkey to restore its influence on the territory of the former Ottoman Empire. Saudi Arabia wants to carry out energy projects through this territory," Mikhail Aleksandrov, a leading expert at the Center for Military-Political Studies of MGIMO told Pravda.Ru. - The objective of the United States and Israel is not to let Iran grow stronger. To achieve this, they need to break the Shiite axis - Iran, Syria, Lebanon, Hezbollah and Iraq with its Shiite government."

The West also benefits from the creation of the "Sunni state, a Sunni buffer zone that would cut communication between Iran, Syria and Iraq."

One may assume that Moscow is building a "security belt." Russia must strengthen its positions in the Middle East to move hostile NATO forces away from its southern borders and deploy military bases in the Mediterranean Sea to be on guard against Turkey's aggression.

Riyadh's strategic goal is to create a Sunni state in Syria and Iraq to oust Russia and Iran. Turkey is busy building the Ottoman Empire and may have agreed the division of spheres of influence with the Saudis.

Can the Sunni coalition conduct a ground operation with the support of Western air forces? Yes, it can, if, for example, the Organization of Arab States supports the operation. This would be considered the legitimization of the conflict. Sunni spiritual ties are not weaker than the Russian ones. Let's see whether Russia defends its desire to be the "pole of power" in the Middle East.

"This coalition is conditional, - said Mikhail Alexandrov. - Each participating country will have to decide what it can and can not do in the coalition. For example, how can Yemen be a part of it when the government of Yemen does not control the country? Other countries - Egypt and Pakistan - depend on Saudi Arabia financially. Saudi Arabia actually pays for the participation in the coalition."

We would like to add here that the Islamic Coalition is an information project, the goal of which is to clear Saudi Arabia of charges of terrorism. It is clear why President Putin put forward the idea of ​​a universal coalition to present Russia's foreign policy in favorable light, to show everyone that we are ready to cooperate with all. Yet, it does not man that Putin believes that this coalition is possible.

With regard to relations with the United States, it is important for Moscow not to let pro-Western forces come to power in Syria.