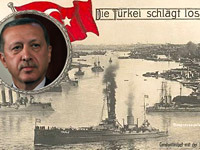 A hundred years after the collapse of the Ottoman Empire, Turkey is re-emerging on the international arena. Furthermore, it intends to regain the ground lost in the 19th-20th centuries, which is a direct threat to the interests of all the neighboring countries, including Russia.  Consider the actions of the Turkish leadership during the past weeks that have caused serious concerns in Israel, Syria, Iraq, Iran and the EU.

Particularly noteworthy are the frictions of Ankara and Tel Aviv, which raise questions about preservation of the Alliance between the two. The Turkish leadership provides a strong support to the Palestinians, and threatened to appeal to the international authorities with a demand to monitor the Israeli nuclear program and promised to prevent the development of Israeli-rich gas fields in the Mediterranean.

Finally, a serious concern in Israel was caused by the fact that on September 7, Turkey announced its intention to sign an important military agreement with Egypt during a corresponding visit of the Turkish government. Of course, this is a historic day in the history of the entire Middle East. Given the sharp rise in anti-Israel sentiment in Turkey and in Egypt, as well as the ongoing processes of evolution of power in several North African countries, the concerns of Israelis about the activity of Ankara on the Egyptian direction are quite understandable.

Worst case scenarios should be considered as one of the options for the future development in the Middle East. One possibility is the return to the days of the 1960s and 1970s, when Israel was virtually in the siege of hostile neighbors. However, at this time the situation in Tel Aviv will be much worse, because Ankara can turn from an ally into an enemy more dangerous than all the Arab countries put together.

Some experts call manifestations of military activity in Turkey an additional concern. Turkey threatens Israel to send a new "freedom flotilla" to Gaza under the protection of the Turkish Navy warships, as well as equip the squadron that will be on duty in the Red Sea. If we take into account the fact that Erdogan sent another squadron to the Israeli Mediterranean coast, it seems that the Turks are threatening Israel with a full naval blockade.

It should be remembered that the Israeli-Turkish complications did not occur in 2010. Gradual cooling has been observed since 2008 in parallel with strengthening of foreign policy activity of Turkish Islamists in power. In the last six months the efforts of Erdogan in this area have been more obvious. However, anti-Israel rhetoric of the Turkish leadership cannot hide his true intentions, which extend far beyond the desire to defy Israel.

First, the emergence of the Turkish Navy in the Red Sea is largely a reaction to the appearance of the Iranian fleet in the area. In addition, Turkey intends to demonstrate a desire to show its power in the region strategically important for the West, where the oil routes from the Persian Gulf run. Second, attention should be paid to Turkey's policy in respect of all Arab countries. Turkey openly threatened Syria to send troops to northern Iraq, and participated in the NATO operation against Libya.

As for Egypt, under Murambak Cairo considered Ankara a dangerous competitor in terms of influence on the Middle East and Arab countries.

Of course, they remain competitors today. But then Egypt used to rely on the full support of the West. Now the situation has changed: the revolutionary changes in the country are just beginning, and Islamist sentiment out there is much worse. Turkey would not mind to use the opportunity to try to expand its influence in this country through the development of the economic ties and military-technical cooperation.

Last but not least factor has to do with the events of "Arab spring" that led to the collapse of the former authoritarian regimes. In this regard, Turkey would not mind using the opportunity to, first, divert public attention from the purely Turkish reality and increase its influence in the region.

It is significant how Islamists Erdogan and Gul support Syrian and Egyptian "Muslim Brothers". This is mostly not an ideological affinity, but the intention to place a bet in the global game. The West supports the Liberals who have no influence on the masses of protesters who sympathize with the radicals like those "brothers."   As for Israel itself, its attitude towards Turkey's behavior is rather unemotional. The Israeli leadership is well aware that strong statements by the Turkish leadership are in fact more focused on winning sympathy among Arabs.

In the discussion about the Israeli-Turkish verbal dispute, it should be emphasized that the actions of Ankara are aimed not so much against the interests of Tel Aviv, but at restoring its influence in the eastern Mediterranean and southern Europe. The Turkish leadership is doing all it can to show that its activity is directed against Israel, to whose shores a few frigates and corvettes as well as dozens of missile boats and support vessels will soon rush.

However, it is sufficient to consider "a new naval strategy" with a great name "Operation Barbarossa - Aegean shield" adopted a few days earlier, which implies that Israeli ships would be placed between Cyprus and Israel. This will allow the latter to make an equal influence not only on the Tel-Aviv, but also Nicosia and Athens. Anti-Israel rhetoric in this case is more like a camouflage to conceal the true intentions of the South-European direction.

In the past six months, Ankara has been aggressively pursuing its policy towards Cyprus and has been trying to prevent the of oil and gas deposits at its shores going to Greek companies. Moreover, the Turkish Minister for EU Affairs Egemen Bagysh openly declared the possibility of using military force to prevent such a scenario.

But there is more to it. Turkey has also announced its plans to increase its Navy presence in the Adriatic Sea. It is known that in the near future a new "assignment" will be given to at least some of the 14 Turkish submarines. This way Ankara intends to strengthen its influence among the Muslims of Bosnia and Herzegovina (BiH), openly declaring this to the European Union that had its own plans for the future of BiH.

In the middle of the 18th century the Ottoman Empire has steadily weakened and lost its influence in the world on all fronts, starting with the Maghreb and ending with the Balkan and Caucasus. It was evidenced by lost wars with its neighbors, including Russia. Finally, in the middle of the 19th century, the Ottoman Empire had the contemptuous name of a "sick man of Europe". Such a characterization was fully justified considering losses in a war with Russia (1877-1878), clashes with the Balkan states, and loss of its Italian possessions in Libya1912-1913. The defeat in World War I meant not only the destruction of the Ottoman Empire, which had lost virtually all the Arab lands. The existence of Turkey in general as an independent state was at stake.

While in 1922 Kemal managed to beat Greece supported by the Entente, it seemed that the Turks have never recovered from the defeat of 1918. Yet, after 100 years of "gathering strength" Turkey seems to be going back to claim the lost. Inevitably, the Turkish activity will be more manifested in the Caucasian and Crimean directions, which cannot but worry Russia.