What example can Canada show the world without Harper?

During parliamentary elections on Monday, Canadians brought the political Trudeau dynasty back to power. The conservative and anti-Russian era of Stephen Harper has thus ended. The new Prime Minister of Canada, Justin Trudeau, whose father was loyal to the Soviet Union, promised that Canada would return to international politics as a "compassionate and constructive" state. 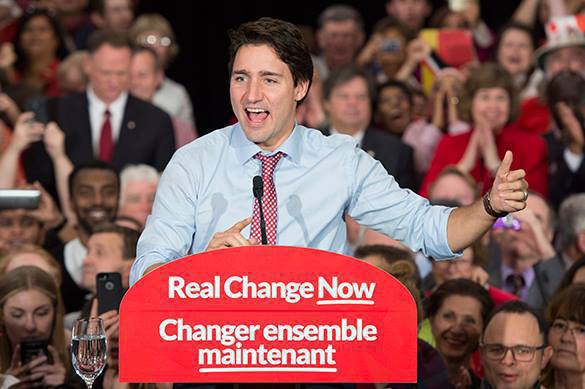 Justin Trudeau's Liberal Party won the absolute majority in the vote - 185 of 338 seats in the parliament. The Conservatives came second with 97 seats, having lost nearly a half of the seats. Stephen Harper immediately resigned. The third and fourth places went to the New Democratic Party, and Quebec Block with 28 and 9 mandates respectively.

At a meeting in Ottawa on Tuesday, Trudeau said that Canada has "lost a compassionate and constructive voice in the world in the past 10 years." "Well, I have a simple message for you: on behalf of 35 million Canadians, we're back, he added.

Fulfilling this promise, Justin Trudeau immediately announced the withdrawal of Canadian aircraft from the Western coalition that bombs positions of the Islamic State in Iraq and Syria. According to him, US president Obama is aware of the decision, but it would not affect the ties between the United States and Canada. Noteworthy, Canada has six CF-18 aircraft in the Western coalition. Trudeau also said that Canada would not be purchasing costly new American F-35 fighter jets.

Of course, Canada is in no way trying to alienate itself from the United States. Still, Trudeau's latest moves mark considerable progress against the backdrop of the policy of his predecessor, Stephen Harper, who was running ahead of Washington on the road of Russia's defamation.

In fact, Canada is setting an example to other countries, telling them to abandon the illegal operation of the West in Syria. Canada is also proactively distancing itself from Washington in the Asia-Pacific region, where an armed conflict with China is brewing in light of the artificially created islands in the South China Sea.

The US intends to start air patrolling of the 12-mile zone of the islands "to ensure free flights and navigation in the areas where it is allowed by international law." Frankly speaking, this is fraught with a direct military conflict with China.

"Upon the arrival of Justin Trudeau, Russia's relations with Canada will become slightly warmer, - the chief of the Department of Canada at the Institute for the USA and Canada, Vasily Sokolov told Pravda.Ru. - I hope that the Liberal Party will improve our relations, although it is not going to happen at once. The Conservatives have always been in the wake of US foreign policy. Contrary to them, Trudeau's father opened the Soviet Union for Canadians. His first official visit was a visit to the USSR. He went even to Siberia." the expert said.

Harper was hoping for the support of the 1.2-million-strong Ukrainian diaspora in Canada. However, anti-Russian propaganda in Canada in connection with the Ukrainian crisis did not work. Twenty-two million Canadians do not understand why their country should be involved in a conflict across the ocean.

Reference: Liberal leader Justin Trudeau is the son of Pierre Trudeau, who chaired the Canadian government from 1968 to 1984. Under Trudeau, Canada obtained full independence from Great Britain. In 201,3 he headed the Liberal Party of Canada.