In what The Mail on Sunday has described as a "bombshell White House memo", leaked classified correspondence from then Secretary of State General Colin Powell to President George W. Bush, of 28th March 2002, alleges that Tony Blair had done what the newspaper calls "a deal in blood" with Bush to support him, come what may, in the attack on Iraq - a full year before the invasion. 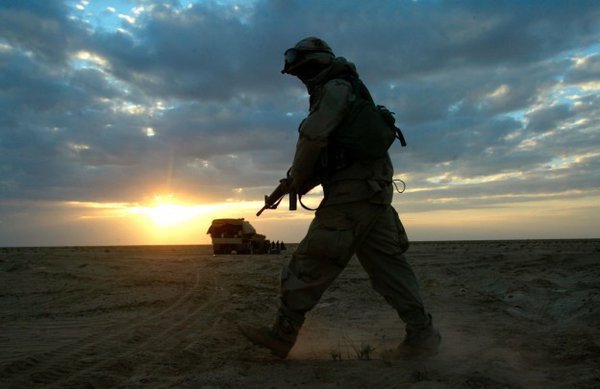 Mislead: "to give false or misleading information to" (Collins Dictionary.)

Blair at the time was claiming to be seeking a diplomatic solution in the Iraq crisis. "We're not proposing military action", he told the public, as he prepared: "to act as spin doctor for Bush", states the Mail which also reveals Powell's affirmation that: "the UK will follow our lead."

Blair continued to claim to have made no decision regarding military action for most of 2002, a diplomatic solution was being be pursued he stated. Since there was no US or UK Embassy in Baghdad and UK Ministers and their US counterparts refused to travel there or engage with the Iraqi government, his assertions never rang even vaguely true. Powell's memo proves the lie. Headed: "Memorandum to the President; Subject: Your Meeting with United Kingdom Prime Minister Tony Blair, April 5-7, 2002, Crawford, Texas", he states:

"Blair continues to stand by you and the US as we move forward on the war on terrorism and on Iraq. He will present to you the strategic, tactical and public affairs lines that he believes will strengthen global support for our common cause."

The paragraph confirms Blair's integral part in the planning and all round strategy of the illegal invasion, whilst telling both Parliament and the public something quite else.

It should also be noted that whilst the line to Parliament and the public had been to tie Saddam's government to the events of 11th September 2001, in the Powell, Bush, Blair circle they seems to be entirely separated, note: "the war on terrorism and on Iraq." No mention of their numerous public allegations of Iraq and international terrorism being inter-linked.

Powell confirms: "On Iraq, Blair will be with us should military actions be necessary."

Pointing out that Blair was not quite unfettered in his entirely illegal plans, Powell writes: "Aside from his foreign and defence secretaries (sic - no capital letters) however, Blair's Cabinet shows signs of division, and the Labour Party and the British public are unconvinced that military action is warranted now."

However: "Blair may suggest ideas on how to make a credible public case on current Iraqi threats to international peace" and how to handle demands for any action to be sanctioned by the UN Security Council." Thus there was full awareness by the Bush and Blair regimes of the lawlessness of attacking a sovereign nation posing them no threat, and whose "sovereignty and territorial integrity" was guaranteed by the UN.

Also notable is that so keen was Tony Blair to ally George W. Bush in invasion plotting that he left the UK during the ten days national mourning for Queen Elizabeth, the Queen Mother. The longest living member of the Royal family had died on 30th March 2002. Queues lined to pay their last respects as she lay in state in Westminster Abbey, the Monarchy grieved and Her Majesty's Prime Minister, Blair, boarded a 'plane to the US.

In September that year Blair claimed that Saddam Hussein's government could release weapons of mass destruction on the West "within forty five minutes", which Colin Powell used in his Iraq war speech to the UN the following February.

Blair would also: "demonstrate that we have thought through 'the day after' ", states the communication. Not only had "the day after" not been "thought through", but the weeks, months, years as Iraq continues to implode and Iraqis continue to die in their uncounted thousands. Even Iraq Body Count - whose estimates of Iraqi deaths are so sanguine and understated that they are used by the US and UK governments - released a Report early this year stating Iraqi deaths from violence are doubling year on year.

Blair, wrote Powell: " ... is sharply criticized by the media for being too pro-US, too arrogant and 'presidential' (not a compliment in the British context) and too inattentive on issues of concern to voters."

"Blair knows he may have to pay a political price for supporting us on Iraq and want to minimize it. Nonetheless he will stick with us on the big issues. His voters will look for signs that Britain and America are truly equal partners in the special relationship."

Powell had not been paying attention. The majority of British voters wanted no "equal partnership" and nothing to do with the Iraq assault or general US global belligerence.

After George W. Bush left office and Barack Obama was elected with such (now dashed) hopes, numerous Americans living in the UK interviewed in the media repeated similar phrases, that they had tried to keep silent on public transport and in public places, ashamed of their American accent, so strong was the anti-American feeling over the treatment of and further threats to Iraq.

Today's revelations have not come at a good time for Blair, scrutiny of whose hands in Iraq's tragedy has only grown over the years. Currently circulating is a petition to Britain's Parliament demanding his impeachment  and a poll asking: "Should Tony Blair Stand Trial for War Crimes?" the affirmative in the latter ranges between 95 and 96%.

Further, it seems Mr Blair also was not entirely truthful with the £10 million, six year long Chilcot Inquiry in to the Iraq invasion - publication still awaited. (5) Sir John Chilcot has given varying reasons for the delay, including 2002 correspondence between Bush and Blair which has been withheld from the Inquiry. It will not be published for another year. He surely has now all he needs to know. Also according the Mail on Sunday:

"During his appearance before the Chilcot inquiry in January 2010, Blair denied that he had struck a secret deal with Bush at Crawford to overthrow Saddam. Blair said the two men had agreed on the need to confront the Iraqi dictator, but insisted they did not get into 'specifics'."

In the real world, was he not a long time associate of Blair, that should surely get Sir John going.

"This is one of the most astonishing documents I have ever read.

"It proves in explicit terms what many of us have believed all along: Tony Blair effectively agreed to act as a front man for American foreign policy in advance of any decision by the House of Commons or the British Cabinet.

"He was happy to launder George Bush's policy on Iraq and sub-contract British foreign policy to another country without having the remotest ability to have any real influence over it."

"Judging from this memorandum, Blair signed up for the Iraq War even before the Americans themselves did. It beggars belief.

"Blair was telling MPs and voters back home that he was still pursuing a diplomatic solution while Colin Powell was telling President Bush: 'Don't worry, George, Tony is signed up for the war come what may - he'll handle the PR for you, just make him look big in return.' "

"What is truly shocking is the casualness of it all, such as the reference in the memo to 'the day after' - meaning the day after Saddam would be toppled."

Davis concludes by linking the terrorism scourging Iraq and the Middle East directly to the actions in which Blair had such an integral part:

"We saw the catastrophic so-called 'de-Baathification' of Iraq, with the country's entire civil and military structure dismantled, leading to years of bloodshed and chaos. It has infected surrounding countries to this day and created the vacuum into which Islamic State has stepped.

"This may well be the Iraq 'smoking gun' we have all been looking for."

Anthony Charles Lynton Blair's final untruths before the invasion were an address to Parliament on 18th March 2003. They included:

"And now the world has to learn the lesson all over again that weakness in the face of a threat from a tyrant, is the surest way not to peace but to war."

And: "The real problem is that, underneath, people dispute that Iraq is a threat; dispute the link between terrorism and WMD; dispute the whole basis of our assertion that the two together constitute a fundamental assault on our way of life."

Should the UK not enjoin the attack: "And then, when the threat returns from Iraq or elsewhere, who will believe us? What price our credibility ..."

"To retreat now, I believe, would put at hazard all that we hold dearest ... stifle the first steps of progress in the Middle East ..."

"This is the time for (Parliament) not just this government or indeed this Prime Minister, but for this House to give a lead, to show that we will stand up for what we know to be right, to show that we will confront the tyrannies and dictatorships and terrorists who put our way of life at risk, to show at the moment of decision that we have the courage to do the right thing."

How wrong, devious and duplicitous can one man be? For how long can he now avoid justice?