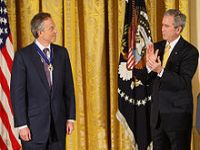 The Independent on Sunday has revealed that having decided to back George W. Bush in the illegal March 2003 invasion of Iraq come what may, in November 2002 the then Prime Minister Tony Blair and then Foreign Secretary Jack Straw, with senior advisors, consulted "six wise men" - then ignored all they had to say. Four of those consulted agreed to talk to the Independent (1.)

The revelations end a week when the publication of Chilcot Inquiry in to the invasion is further delayed and government statements confirm it will not now be released until after the UK elections in May, fuelling suspicions that Prime Minister David Cameron - on record as Blair's admirer, regarding him as a "mentor" - is watching Blair's back.

Senior politicians are calling for an immediate release of the Inquiry's findings with Welsh Plaid Cymru's Parliamentary leader Elfyn Lwyd demanding in a parliamentary debate this week: "for all documents cleared for publication to be released immediately." Deputy Prime Minister Nick Clegg stated that the delay is leading to fears the Report is being "sexed down." (Guardian, 24thJanuary 2015.) Blair's "dodgy dossiers" were, of course, cited as having been "sexed up."

The revelations of the "wise men", all academics with exceptional knowledge of Iraq, "the Middle East and international affairs" can only further embarrass Cameron and put further pressure on a (hopefully) embattled Blair.

The consultation, held in the Cabinet Room was for the experts to "outline the worst that could happen." The invasion, had been decided just days after 11th September 2001 (2.) Consolidation was at a meeting between Bush and Blair seven months before the day of the "wise men", in April 2002 (3.)

"They were expecting a short, sharp, easy campaign" and grateful Iraqis said Dr. Toby Dodge, then of Queen Mary University of London, now of the London School of Economics and Senior Consulting Fellow at the Institute of Strategic Studies.

He warned that Iraqis would fight against invaders and for their country over celebrating the fall of Saddam Hussein. He warned of "disaster" and civil war. "My aim ... was to tell them as much as I could, so there would be no excuse and nobody saying 'I didn't know.' "

Dr. Dodge still has faith in the Chilcot Report (4) stressing the panel's long fight to obtain the transcripts of the Blair-Bush conversations. He believes it will: " be damning."

Professor George Joffe of Cambridge University concurs: "I think it is bound to be damning. The errors of judgement were so blatant, there is no way they can whitewash this."

Dr. Dodge commented on the detailed briefing the six had from Blair's staff on the day of the meeting, 19th November. They were warned: "Don't tell him not to do it. He has already made up his mind."

And after the invasion? "They had no plan for what would happen ..." said Professor Joffe: "The approach was: "the Americans are heading this up. They will have a detailed plan. We need to follow them." There was no such plan. "The State Department spent a year preparing a detailed briefing (on the post invasion scenario.)" It was "junked." " They were making up policy on the hoof."

Professor Joffe also "emphasized the rigid power structure in Iraq" thus the complexities of removing, collapsing it. He "became frustrated" when Blair's simplistic response was: "But the man is evil, isn't he?"

George Joffe also states: "The people who were put in charge of Iraq had very little knowledge or experience of the Middle East ... They were quite childish in somehow believing democracy would bloom", demonstrating "ignorance" of the region, even of political workings.

Moreover, the decision to dismantle the army and the ruling Ba'ath party "opened a Pandora's box" removing the lid which had been in place. "Islamic State is a direct consequence of the decision to invade."

Steven Simon, then Deputy Director of the International Institute for Strategic Studies, a US diplomat seconded from the State Department who attended the gathering believes whatever the planning, the invasion would have anyway been catastrophic.

With proper planning there might have been a slender chance: "But only a small shot."

Professor Michael Clarke, then of King's College London, now Director General of the Royal United Services Institute believes Blair's public justification of the invasion was mistaken. " We knew there was no nuclear stuff in Iraq."

He did, however, believe there were chemical weapons, in spite of the fact that the embargo was so strangulating that even vital water purification and blood products, ping pong balls, building materials, just about everything was denied and all seeing US satellites monitored all movement.  Nevertheless, the "45 minute" strike against British troops in Cyprus was "always absurd."

With the two "dodgy dossiers" Blair: "presented his case to the public as if he had incontrovertible evidence that Saddam had weapons of mass destruction. That was rubbish. They were ridiculous documents, both those documents."

Professor Clarke though seemingly has some sympathy for Tony Blair: "He has been knocked about, but I think history will judge him more kindly than his contemporaries." There will certainly be many who have no such expectations, believing Blair may well join history's most infamous reviled.