Tony Blair's Save the Children Award: An Inadequate Apology

On the evening of 19th November 2014, the charity Save the Children, with a gala event in New York, "recognized" Tony Blair - whose government enjoined in the ending of the fledgling lives of children on an industrial scale in Afghanistan and Iraq - with their "Global Legacy Award." 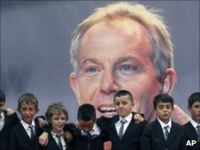 "If justice and truth take place,

If he is rewarded according to his just desert,

On the evening of 19th November 2014, the charity Save the Children, with a gala event in New York, "recognized" Tony Blair - whose government enjoined in the ending of the fledgling lives of children on an industrial scale in Afghanistan and Iraq - with their "Global Legacy Award."

In Iraq's decimation of course, Blair's regime was responsible for the dodgy dossier alleging Saddam Hussein's ability to annihilate in "forty five minutes", thus persuading for war, but had also enjoined with the US between 1997 and 2003 in ensuring, via the United Nations Sanction Committee that Iraq's infants and children were denied all normality from the womb to their young deaths at an average of 6,000 a month.

Blocked were scanners to check the developing foetus, incubators for the frail newly arrived, paediatric oxygen, paediatric syringes, tracheal suction tubes to clear airway obstructions and all needed to combat a challenging start to life in order to become a healthy toddler and enter happy childhood.

For those who survived to childhood, reading and exercise books, paper, pens, pencils, blackboards, toys, tricycles, bicycles, scooters, all juvenile joys and normality were vetoed. When they suffered what are normally relatively simply treated ailments, infections, asthma, the antibiotics, inhalers needed were invariably also vetoed or fatally delayed. All policies endorsed by Blair's government.

Then Iraq's deprived, traumatized children were bombed and invaded in an action largely publicly justified by his government's documented lies.

Yet Save the Children honoured Blair - to immediate condemnation. In the UK a petition on site "38 Degrees" quickly garnered nearly 125,000 signatures in protest (UK only, world wide it would certainly have been in orders of magnitude more.)

Judging by the uproar on blogs, Twitter, social media sites it has been a spectacular own goal for Save the Children with countless supporters cancelling their subscriptions or donations.

At a meeting with Brendan Cox, the charity's Director of Policy and Advocacy, a small delegation with Robin Priestley of 38 Degrees, handed in the petition and in a meeting: " ... all had to agree that it was impossible to remove the Award from Tony Blair now ..." (1) Given the damage caused by this insane honour, Mr Cox should surely have committed to moving heaven and earth to doing exactly that.

However, now he has a chance. Justin Forsyth, Save the Children's UK Chief Executive, who personally delivered the invitation to Tony Blair and was a former aide to him as Prime Minister, apologized this morning (sort of) on BBC Radio 4's flagship "Today" programme.

He was sorry for the offence caused and that it had become an "unnecessary distraction" (2) from the organization's work. Given Blair's record in endorsing child deaths and resultant uproar the Award caused and the redesign of their logo to "Kill the Children" found across social media, it was not a "distraction" but an outrage.

Upsetting people, said Mr Forsyth: " ... is not really what we do at Save the Children." Really? After this so close to home, can their judgement in differing global cultures possibly be trusted?

There was some verbal footwork about the Award being for Blair's work in Africa, however this is defined as a "Global Legacy Award." The former Prime Minister's "legacy" is mass graves of dead children from Kandahar to Falluja.

Moreover, according to Blair's Faith Foundation website: "Mr. Blair was recognised for his work ... in 2005 to pledge to double aid to Africa and provide 100 per cent debt relief to eligible countries, as well as his work in partnership with African governments through the Africa Governance Initiative (AGI)." It might be worth trawling the potentially "double aided" and "100 per cent debt relief" countries to see if and how many of the beneficiaries he might have one of his many lucrative advisory roles with. Politics is hardly known for lack of back scratching.

Today's Daily Mail on line also quotes Mr Forsyth as stating: "I know that many of our supporters and volunteers were very upset and our staff, several of our staff too, and I'm very sorry for that." Another verbal sleight of hand and it was not "several staff."  By 28thNovember, the Guardian reported: "An internal petition circulated among Save the Children employees around the word is to be presented to head office." Describing the award as "morally reprehensible" and calling for it to be rescinded, the petition has gathered more than 500 staff signatures."(3)

Their "Vision, Mission and Values" (4) include:

* "We aspire to live to the highest standards of personal honesty and behaviour; we never compromise our reputation and always act in the best interests of children." Tell that to Iraq's five million orphans and their uncounted counterparts in Afghanistan, to the bombed, orphaned, traumatized children of Gaza who the "Middle East Peace Envoy" has ignored.

* "A world in which every child attains the right to survival, protection, development and participation." Think about it, Save the Children. Were words ever more hollow after the honouring of a man mired in the destruction of every aspiration in that sentence.

On 5th December 2014, a letter (5) was sent to Save the Children by Inder Comar of the legal firm Comar Law, San Francisco. outlining starkly the enormity of the illegality of the attack on Iraq in which Mr Blair had been so integral. It pointed out that Save the Children's hero's name is entered at the International Criminal Court at the Hague in its "Register of War Criminals."

The correspondence, in which I declare an interest, was sent on behalf of Denis Halliday, former UN Assistant Secretary General, Professor Michel Chossudovsky, Director of the Centre for Research on Globalization and myself included:

'As you may also be aware, in 2004, Secretary General Kofi Annan declared the Iraq War illegal and in contravention of the United Nations Charter.1

'In 2006, a former prosecutor at the Nuremberg Trials, Benjamin Ferencz, stated that the Iraq War was a "clear breach of law."2 "There's no such thing as a war without atrocities, but war-making is the biggest atrocity of law."

'In 2010, a Dutch inquiry concluded that the Iraq War had no basis in international law.3

'In 2010, Hans Blix, the former chief weapons inspector for the United Nations, stated that it was his "firm view" that the Iraq War was illegal.4

'In 2012, judges empanelled before the Kuala Lumpur War Crimes Tribunal, an independent commission headed by former judges and involving input from several international law scholars, concluded that a prima facie case existed that Mr. Blair committed the crime of aggression against Iraq. The tribunal reported its findings to the International Criminal Court in the Hague and entered the name of Mr. Blair in its "Register of War Criminals." '

It concludes: "Was there any consideration to the optics of giving this Award to Mr. Blair in light of the fact that many of Save the Children's current management - including Jonathan Forsyth, Jonathan Powell, Sam Sharpe and Fergus Drake - have intimate ties with Mr. Blair and his government? Was there any consideration to the moral paradox of providing this Award to a person whose destitute victims are concurrently succored by Save the Children staff?"

It demands: "Please confirm that Save the Children will rescind the Global Legacy Award forthwith."

There has been no reply. That action however, would a gesture of, albeit belated, tangible apology and might be a start at repairing Save the Children's tattered image.

If State Honours, Knighthoods etc., can be withdrawn from those subsequently deemed unworthy of their bestowal, surely so can Save the Children's woefully misplaced Global Award.