By Nicolas Bonnal
The adventurous imbecility of American attitude in Ukraine and Syria is now denounced in Washington by American commentators. 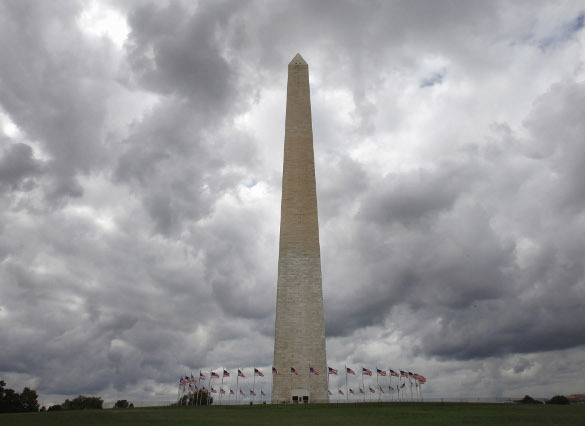 Some underline Obama's incapacity in dealing with important matters (incapacity copied here with such pitiful figures as Merkel or Hollande), but beware, because Obama becomes an easy target. He is a used toy, left alone and fatigued. If we had to deal with a neocon president, this would be quickly the end of the world.

Other commentators underline the role of vociferous neocons that are being ousted and humiliated these days; some finally recall the usual divisions reigning in Washington among all the bureaucrats and computers that design the phony strategy. At this point, the only remaining asset of America is the dollar; but for how long? American strategists should basically read again Clausewitz. The Prussian theorist coldly established the following points:

'Each tries through physical force to compel the other to do his will; his immediate aim is to throw his opponent in order to make him incapable of further resistance. War is thus an act of force to compel our enemy to do our will.

Force--that is, physical force, for moral force has no existence save as expressed in the state and the law--is thus the means of war; to impose our will on the enemy is its object. To secure that object we must render the enemy powerless; and that, in theory, is the true aim of warfare.'

This is Putin's strategy. But what is American strategy? A strategy that makes America powerless, not her enemies!

America feigned to be outraged by the attacks so welcome fourteen years ago. But then she destroyed innocent nations, structured Isis and resurrected Al Qaeda to comply with the will of Israel and Saudi Arabia, two old allies which both want to establish chaos in their martyred vicinity.

And so was the result: strategic ineptitude, to speak like Colonel Wilkerson.

Washington or NATO destroyed Libya for nothing, ousted Mubarak from power for nothing, annihilated Iraq for nothing, sanctioned Russia or ruined Iran for nothing. This is a clean nihilistic strategy, a brilliant outcome for those Wolfowitz guys who pretended to be the heirs of Jewish-German philosopher Leo Strauss. This refugee (beware of the refugees!) denounced once Nihilism in classical German philosophy. So he wrote an essay to criminalize German thinking. Well, thanks to him a neo-nihilism came to America, but with psychoanalysis and relativity! A demonstration of the American contemporaneous nihilism is the movie Charlie Wilson's War, starring a bored and boring Tom Hanks, but showing how the American elites hectically and distractedly financed the Afghan Islamic terrorism in the eighties on the behalf of fighting perennial communist enemy. They helped the Mujahidin for humanitarian and messianic reasons that cause every time a disaster: destroy to save the world.

And what wouldn't they do too to kill the Russian bear...

I reminded a few months ago the reflexions of strategist John Mearsheimer about Syrian and even Ukrainian everlasting crisis:

'The United States and its European allies share most of the responsibility for the crisis. The taproot of the trouble is NATO enlargement, the central element of a larger strategy to move Ukraine out of Russia's orbit and integrate it into the West.'

Mark these words. And Professor Mearsheimer added too:

'Elites in the United States and Europe have been blindsided by events only because they subscribe to a flawed view of international politics.'

And he observed the effects of American insane policy:

'Current U.S. policy, however, is only driving Moscow and Beijing closer together.' America is now driving too Damascus, Baghdad and Tehran closer to Russia; with such an enemy Putin doesn't even need to revise Clausewitz.

Recently other officers in America denounced Obama's bizarre diplomacy and geostrategic mess. Col. Wilkerson, Former US army colonel and Chief of Staff for Colin Powell, declared in a philosophical interview (I was thinking of Spengler):

"History tells us we're probably finished. The rest of the world is awakening to the fact that the United States is 1) strategically inept and 2) not the power it used to be. And that the trend is to increase that."

"Empires at the end concentrate on military force as the be all and end all of power... at the end they use more mercenary based forces than citizen based forces" "Empires at the end...go ethically and morally bankrupt... they end up with bankers and financiers running the empire, sound familiar?" [...] "This is what empires in decline do, they can't even govern themselves" »

Another high-ranking officer, General Flynn, from the DIA, recently confessed to Russia TV that he "doesn't have any words to describe" Washington's training program aimed at tackling ISIS, which came at a cost of $500 million and has resulted in just a handful of fighters still on the ground."

Well, if Janet is still able to print the money, America will be able to finance phony wars anywhere and phony terrorist forces and phony warmonger entities...

The problem remains the US dollar, in whom everybody trusts more than in God.

As long as the world will accept American currency it will be submitted to an evil and lethal will. But this is our destiny. If we are destroyed one of theses days by NATO's monstrous bellicose behaviour, we will be responsible for that crime. I understand the deception of some enlightened officers and experts, but we know how isolated they are in the Washington quagmire.

We have seen the best of our time. Machinations, hollowness, treachery, and all ruinous disorders follow us disquietly to our graves. - King Lear