Germany to be conquered by Islam 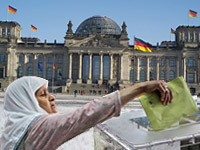 Germany's population is declining, and the losses are replenished by immigrants, largely Muslim. The country has already addressed the topic of introducing regimental mullahs in the German Army. There are some ethnic Turks among the leading politicians of Germany.

Federal Statistical Office of Germany has released a regular data on changes in the population size. It was discovered that in 2010 Germany lost 51 thousand people. In the past couple of years the decline was even more pronounced. The statistics was corrected by reducing the number of those leaving the country for permanent residence and immigrants. There were 798,000 of the latter, 77 thousand more than in 2009. A significant proportion of new arrivals are from Muslim countries.

Meanwhile, representatives of Islamic associations in Germany once again reminded of themselves by a radical proposal to introduce the position of regimental mullahs in the country's army. "It would be of great importance for the integration process," considers the head of the Central Council of Muslims of Germany Ayman Maziek. According to him, the army today has 90 Catholic and Protestant chaplains, but there are no mullahs yet.

According to the official data, there are approximately 1,200 Muslims in Bundeswehr, but Islamic groups say that this number is significantly understated. They warn that in the future the number of Muslims in the ranks of the German Army will only grow, and in such circumstances, the regimental mullahs may be indispensable to the commanders in settling any conflicts between members of different confessions.

So far the Bundeswehr commanders are very skeptical about this idea. In the German contingent in Afghanistan the number of Muslims is very small. In addition, the Bundeswehr would have to have contact with an organization a mullah is representing. Chaplains are members of the Roman Catholic Church and the Evangelical Lutheran Church. Muslims do not have a similar organization.

All the evidence indicates that the number of Muslim soldiers in the Bundeswehr will continue to grow - as in any other sphere. Today, the country has 4.3 million Muslims (more than five percent of the population). Nearly two-thirds of Germany's Muslims is made up by the Turks. Others are mainly Kurds, people from Arab countries, Bosnian Muslims and Albanians. Most of them are from the lower social strata, and the service in the Bundeswehr is a lucky ticket for them.

According to local pollsters, approximately 45 percent of them have German passports, but only 25 percent would like to be fully integrated into the community. In this case, the Bundeswehr has something to think about. Would Muslims want to go into the army and defend this country if it does not have regimental mullahs? Will they even shed blood for Germany if they do not consider themselves Germans? Perhaps in some time it will be difficult to manage without the mullahs. Maybe they will be able to "pull" the Muslims into the ranks of the Bundeswehr. Yet, can such an army be regarded as German?

The role of Muslims increases not only in the army, but in other areas as well - business, culture, politics and sport. One of the leading German film directors is Fatih Akin, singer Tarkan is another outstanding representative of German-Turkish culture. Turkish Mesut Ozil and Tunisian Sami Hedira are successfully playing for the national football team. Many German-Turkish players choose the national team of their ethnic homeland.

Abundance of Turks and Muslims did not spare the German policy. An ethnic Turk Cem Ozdemir is the co-chairman of the "green" party. Bundestag deputy from the Social Democrats Akgun Leila became famous for calling to ban headscarves in public places. Turk Aigul Ozkan decided to build her career in the ranks of the Christian Democratic Union. Last year, she even became the Minister for Social Policy and Integration of Lower Saxony land and immediately proposed to remove the image of crucifixion from the schools. At the same time she criticized head scarves.

Apparently, this is not the limit. Recently, during a visit to Germany, Prime Minister Recep Tayyip Erdogan urged his tribesmen living in Germany to remain the Turks in the first place, and suggested that the authorities of Germany open schools with instruction in the Turkish language. It looked like a fairly frank and provocative intervention in the affairs of Germany, angrily rejected by Foreign Minister Guido Westerwelle. However, the question arises whether the country would be able to avoid "Turkification" and "Muslimifacation" of the German education system, army, and then the politics.

Let's take a look at the demographics. If among the ethnic Germans people of retirement age make up for a quarter of the population, among the Turks they account only for five percent. Only a quarter of Germans are young people aged 14 to 29, while among the Turks there are 50 percent of those. Other Muslims have even higher birth rate than the Turks, and the proportion of young people among them is even higher. Immigration has not stopped. Given the developments in North Africa, Germany can expect Egyptians, Libyans and Tunisians - also people of young age.

Incidentally, the German Turks and devout Muslims are not identical concepts. All abovementioned people of politics, culture, show business and sports are an example of successful integration into the German society. A huge percentage of Turkish women in Germany are not wearing hijab, almost a third of Turks do not go to the mosque. However, there are others who continue to live under sharia law. Among those from the Arab countries the percentage of people who accepted the German way of life is even lower.

The growing number of Muslims in the country (and specifically the Turks) makes the locals be increasingly more hostile towards them. A group of experts with the Council of Europe headed by former Foreign Minister of Germany Joschka Fischer recently conducted a study and found that the number of people who are afraid of Muslims is growing. "Many Europeans have the belief that Islam is a radical, militant religion, incompatible with the European values," the report says.

A separate study was conducted 18 months ago by experts of the sociological institute Dimap specifically in Germany. Thirty-six percent of Germans expressed serious concern over the expansion of Islam, and 39 percent - mild concern. The fears are largely exaggerated, but these figures eloquently show that the problem exists. Strictly speaking, its existence was acknowledged by Chancellor Angela Merkel herself.

The solution of the problem is a complex issue. If everything continues as it stands today, Germany will gradually be transformed into half-Islamic or half-Turkish state, and the Bundeswehr can be considered the German army with a stretch. Should they expel the Muslims from the country? It is fraught with a discontent of the huge community and anger of the human rights defenders. Should they leave things as they are? Then there is the risk of increasing the capacity of the electoral right-wing or even outright Nazis. In the long term there may be a collision on the ethnic and religious grounds.

What should Germany do to save its face and at the same not to anger the Turks? There are no simple solutions to the problem. It seems that the authorities of Germany know it. However, they are not succeeding, and the issue in the meantime is getting worse.

News from the Kremlin
Kremlin responds to Biden's 'Crimea is Ukraine' statement
Ukraine. The latest and breaking from Ukraine
Yulia Tymoshenko comments on her new image
Health
Russia readies to test direct-acting drug against COVID-19 in humans

Will there be a new Berlin Wall between Russia and Europe? Lyuba Lulko
Columnists
The Message of Judas and the Black Messiah
Economics
Can Russia live without the US dollar?