How the Maidan Golem is worrying the NYT 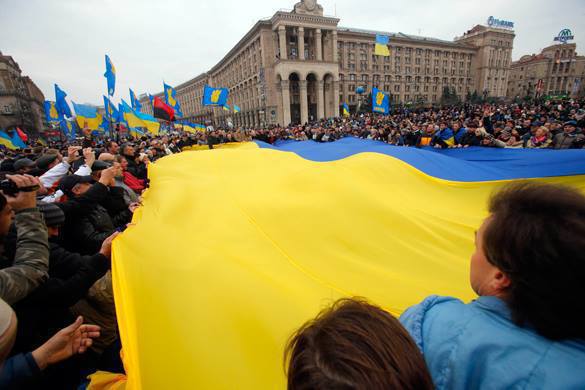 I know, said the scorpion, yet it is my character. Let's drink to character.

A political golem is always ravenous, and the Ukrainians experiment is a disaster and a mess. Like Libya, like Syria, like Iraq, Ukraine is entering another year of nightmare. The democratic spring turns out to be the greatest European delusion in recent history. Yet public opinions in the West still don't draw conclusions. Western cybernauts prefer to add a million comments more about Lady Gaga's last pair of Bordello or Demonia shoes: for this is the world we live in.

American and western diplomacy are used to such experiments: they destroy a disobedient state and put at its place an submitted yet incompetent and corrupted regime. We can give tens of examples of such mess in recent history. Old colonial and capitalistic powers, France, UK, US of course can't help it. As quipped once Orson Welles about 'the scorpion that killed the frog that bore him on the river': "it's their character. Let's drink to character". Yes, Mr Arkadin, let us drink another glass of blood to character!

Last year the Maidan putsch run by CNN, NATO and Nuland puts to power a completely irresponsible, corrupted and tyrannical regime in Ukraine. An unlucky people, since bolshevism, Holodomor (whose responsibilities are not defined, and guess why?) and WW2, the Ukrainians are now facing another wave of misery, debt and disorganization. They had the possibility to become Russia's brothers and share the prosperity proposed by Putin. This beautiful possibility grew faint and Vladimir Putin was of course compared to indispensable Hitler.  Ukraine has lost 25% of its GDP in two years. Bravo the West.

The mad junta that took power wants to get a WWIII and an atomic war with Russia. So far they did not obtain that happy perspective and they behave more wisely, asking a ruined Europe and ridiculous IMF a mere 40 billions loan. Champion of Human Rights Yatsenyuk is under investigation. And harpy Nuland is now sidelined by a prudent John Kerry. But who will succeed to John Kerry and Barack Obama: a rougher pair of cowboys? Ask Mrs Clinton and Bush the third; ask American oligarchic and dynastical system.

Ukraine on the cliff of bankruptcy, but Germany and France will pay

Let us laugh with the NYT (17th may edition):

"The country is on the cliff of bankruptcy. A spate of politically motivated killings and mysterious suicides of former government officials has sown fear in the capital. Infighting has begun to splinter the pro-European majority coalition in Parliament. And a constant threat of war lingers along the Russian border."

As we know this government has killed six thousand of its fellow citizen with the blessing of western media. A Malaysian airplane was shamefully shot down, this scandalous false flag operation - typical of western secret services - killing three hundred people. We can understand the usual necessity of this human sacrifice if we keep reading Debord:

'Such a perfect democracy constructs its own inconceivable foe, terrorism. Its wish is to be judged by its enemies rather than by its results. The story of terrorism is written by the state and it is therefore highly instructive. The spectators must certainly never know everything about terrorism, but they must always know enough to convince them that, compared with terrorism, everything else must be acceptable, or in any case more rational and democratic.'

Let us keep reading and joking with our old friends of the NYT. We live in at the age of economic madness, so let us appreciate with an American commentator the economic balance of this kindly democratic and revolutionary regime:

'The shattered economy keeps sinking, with the G.D.P. plummeting 17.6 percent in the first quarter of 2015. Hoping to avoid default, senior officials have been in protracted negotiations with creditors, but they have failed so far to secure a deal. Officials also now fret openly that more than $40 billion pledged by the International Monetary Fund and allies, including the United States and the European Union, will not be enough to keep the country afloat.'

Ukrainian martyrdom is not finished, unless people wake up; but how, and at what price?

Western Europe is weak and distracted

We do have anyway a similar problem in Western Europe: we are weak, distracted and anesthetised; our countries are submitted to international bankers, whose grip has created infamous euro, de-industrialized our economies, inflated our debts, and now created a new problem of immigration. Goldman Sachs pawns like Moedas, or ex-tycoon Sutherland, they all press us to 'undermine any national homogeneity' in order to create jobs. The same problem occurs in America, and these banking artists want to apply their objectives in China, Russia and elsewhere. Read again Robert Reich, a courageous secretary of labour, who once spoke about the excesses of the 'manipulator of symbols', these dark wizards of postmodernism.

Last year the NYT, the journal of the useful idiot in the postmodern world was insulting Putin and praising delicate Yatsenyuk. Now the tone is more suave:

'The Parliament, in which pro-European parties control a huge majority, voted last month to create a special committee to investigate accusations that Mr. Yatsenyuk, a suave English speaker admired in the West, and his cabinet have presided over the embezzlement of more than $325 million from the state.'

The parliament is very dumb, and it was elected with ridiculous promises. And now the NYT fears that Germany and France, although complete puppets-states, will not pay the bill nor execute the orders:

'The continuing disarray is becoming a source of friction between the Ukrainian government and its European allies, especially Germany and France, whose leaders helped broker the cease-fire and are increasingly frustrated with the slow pace of change.'

The NYT having poor imagination, Poroshenko is now the future Hitler-labelled guy given that he looks for scapegoats or at least a responsible for the Ukrainian awful crisis:

'Adding to the tumult, Mr. Poroshenko recently declared a crackdown on the country's richest and most powerful businessmen, known as oligarchs, in a bid to curtail their influence and to win back popular support.'

As we know, Poroshenko wanted to resume the war. Many people are gunned down in Ukrainian streets, people who do not agree with such lousy politics. But the Obama Administration now had slammed Poroshenko down. And as we know, the Russian parade of last 9th may and the Russian system of defence sold to Iran has somewhat cooled the ardour of Americans ninjas who pretend to rule the world with menaces, assassins and robber barons.

Yet we are not through with the politics of the New World Order and its millions of points of light. Let us observe with last great French thinker Guy Debord:

The general contempt created by the spectacle thus, for new reasons, restored the fascination of what in Kipling's day was called 'the great game.' (...) It is certainly not the spectacle's destiny to end up as enlightened despotism.