The New York Times: What passes for journalism in newspaper of record 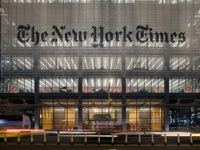 Overall, America's major media fails the test. It's biased, shameless, and irresponsible with "everything to sell and nothing to tell" as a noted US media critic once said. It delivers a daily diet of "managed news" (propaganda), infotainment, and "junk food news," a worthless mix, treating people like mushrooms - well-watered, in the dark, and uninformed about what matters most. No wonder greater numbers opt out, consuming less broadcast "news" and print media, the kind no one should waste time or money on.

No paper has more clout than The New York Times. Media critic Norman Solomon once called its front page "the most valuable square inches of media real estate in the USA" - in fact, anywhere because its reports circulate globally.

In his April 1998 article titled, "All the News Fit to Print (Part I): Structure and Background of the New York Times," Edward Herman called The Times "an establishment newspaper," serving wealth and power interests, a record dating from 1896 when the Ochs-Sulzberger family took control. Its agenda "persist(s) to this day" as two earlier articles explained.

For many decades The Times has had the lead role distorting, censoring, and suppressing truth, a shameful record:

- ducking major issues like government and corporate lawlessness and corruption, sham elections, democracy for the select few alone, an unprecedented wealth gap, and eroding civil liberties and social benefits; and

"The process was wrenching....Barack Obama put his presidency on the line for an accomplishment of historic proportions." The editorial called the law "a triumph for countless Americans who have been victimized or neglected by their dysfunctional health care system."

In fact, Obamacare is a shameless rationing scheme to enrich insurers, drug giants, and large hospital chains. It imposes marketplace solutions, not vitally needed equitable reform assuring universal coverage, free from predatory insurers that overcharge and profit by denying care. No matter. The Times cynically called it "another stone firmly laid in the foundation of the American Dream....reforms (that) could ultimately rival Social Security and Medicare in historic importance." So much for truth.

It was another great "victory for Mr. Obama, who has had to fight for every inch of progress," calling the "new consumer financial protection bureau established in the bill....a milestone, not only for its intent and power to rectify lending abuses, but because it will institutionalize the insight that the safety and soundness of banks cannot - and should not - be measured by profitability alone, but by the impact that bank practices ultimately may have on consumers."

Rubbish about business-friendly legislation that solidified Wall Street's dictatorship, institutionalized casino capitalism, let financial giants operate freely, gave the privately owned Fed greater powers, and established a toothless Consumer Financial Protection Bureau with little power to help anyone. Its head, Elizabeth Warren, is, in fact, a "watchdog" in name only, chosen because she supports Obama's policies and will follow them obediently in office.

More recently, The Times downplayed the initial WikiLeaks "Afgan War Diaries" release, then collaborated with White House officials to sanitize it, clearing what they published in advance, letting official Washington decide what to print.

Later, The Times public editor, Arthur Brisbane, answered his critics, saying the paper had a journalistic and civic duty to review the material before publishing. In other words, print only what White House officials judged appropriate, not journalists. Moreover, he vilified Julian Assange, WikiLeaks founder, calling his character "sketchy," then adding:

"Whether or not Julian Assange is a rogue with a political agenda (implying he is), what matters most is that The Times authenticates the information."

False! What matters most is supporting state and corporate power, including imperial wars for profit and global dominance, the real Times agenda.

"The draft proposal by the chairmen of President Obama's deficit-reduction commission was a welcome antidote to the low-minded debate that dominated the midterm elections," offering "no credible plans."

"It lays out sensible principles....It puts everything on the table, including tax reform" and spending cuts. "At a time when good ideas are depressingly scarce in the political and economic debate, and bipartisan agreement even scarcer, this is a commendable start."

"We (hope) Republicans (will) pause long enough in their gleeful planning of President Obama's final defeat, and the Democrats would stop wringing their hands, long enough to read this important document - and then act on it."

On November 26, The Times ran two shameless articles, among others, both by Randal Archibold, one titled, "Russian TV Kowtows to Kremlin, Critic Says," saying:

Leonid G. Parfyonov, a Russian TV and print journalist, "used the occasion of an awards ceremony to deliver a blistering critique of Russian television, saying its journalists had bent so completely to the will of the government that they were 'not journalists at all but bureaucrats, following the logic of service and submission."

Regardless of whether it's true, the hypocrisy is glaring, a clear pot (The Times) calling the kettle (Russian television) black example, and a personal note.

In summer 2008, I was interviewed on Russian television for 30 commercial free minutes, discussing America's Eastern European policies. In fairness, it was Russian friendly, but I was allowed to speak, uninterrupted, as freely as I write and air on my radio program, the Progressive Radio New Hour. Because of my writing, I'm interviewed often, never on corporate radio or TV for a reason. Truth there is banned the same as on Times pages.

"Back in the city (Port-au-Prince), the bustle of life presses on." Without mentioning desperate conditions for around 1.5 homeless Haitians, living exposed on streets with practically no aid, he continued:

"The place is pregnant with anxiety and sporadic political violence just a few days from 'selecting' of a new president." Perhaps a Freudian slip, because Sunday's first round legislative and presidential "elections" are bogus enough to make a despot blush.

Archibold then focused on campaign rallies, ignoring the exclusion of 15 political parties including by far the most popular, Aristide's Fanmi Lavalas. He also downplayed friction between UN Blue Helmets (a paramilitary occupying force Haitians hate and want out), and conveyed the appearance of normality, when, in fact, conditions are appalling and desperate. As a result, most Haitians will boycott an election they know is a sham.

Dancing in the streets? Perhaps by Haiti's elites, knowing chosen officials will benefit them at the expense of ordinary people valued only to exploit. So much for truth and what passes for "fit to print" journalism.