Western executors, who love to talk about the need for regional cooperation, inter-ethnic tolerance and humaneness, start talking about absolutely different things as soon as it comes to their prime enemy - the Orthodox world. Now, they are busy with demonizing Macedonian leader Nikola Gruevski for his attempt to take the country out of economic and political chaos with the help of Russia and Serbia. 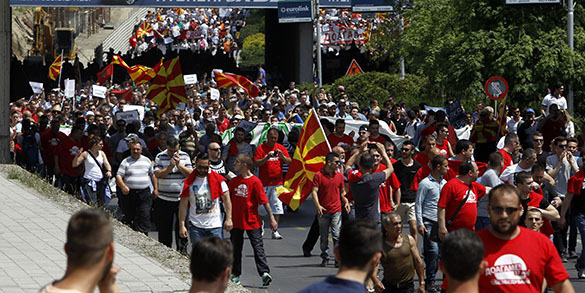 Swedish Foreign Minister Carl Bildt, one of the ideologists of the anti-Russian crusade, spoke about Orthodoxy as the main enemy of the West. "Orthodoxy is the main threat to the Western civilization," he tweeted in May 2014. Today's protests in the Orthodox Macedonia are interpreted in the West as the struggle of people against Gruevski's "corrupt government" (the Democratic Party for Macedonian National Unity).

Opposition find compromising materials against Gruevski, "the outraged masses" want him to step down and promise to stay on the square of ​​government buildings to the end. Germany's Sueddeutsche Zeitung already wonders what is going to happen if Gruevski resigns. Another German publication, Die Tageszeitung, does not exclude that it was the prime minister, who masterminded the tragedy in Kumanovo to switch people's attention from depressing domestic problems to an external factor.

The violent clashes in Kumanovo triggered protests at first among Albanians, who revolted against police lawlessness. Afterwards, as Western media say, other ethnic groups joined them: Macedonians, Serbs, Bulgarians and Turks took to the streets to protest against the government. It is evident that the story seems to be a mixture of corruption and interethnic relations.

The protests began, because of the USA's defeat in Ukraine, the Director of the Belgrade Center for Strategic Alternatives, Dusan Prorokovic believes. In the article "Defense of Macedonia", published on Vidovan.org, he wrote that the Americans failed to reach all of their three goals in Ukraine. The USA failed to destabilize Russia for the subsequent removal of Putin from power. In addition, the Americans failed to move NATO into Ukraine to dramatically worsen Russia's geostrategic position. To crown it all, they failed to create the anti-Russian hysteria in Europe, to stronger attach the EU.

Unleashing the conflict in Macedonia, the United States is developing a new way of putting pressure on Europe - via the Balkans, Prorokovic wrote. The US thus justifies maintaining its military presence in Eurasia and preventing Russia's offensive in the Balkans through the "Turkish Stream."

The pipeline was to be built via Greece, Macedonia and Serbia to Austria. If successful, the project would have been a major geo-strategic failure of the United States that, together with Germany, have been controlling the Balkans for 15 years already, Prorokovic believes.

Russian Foreign Minister Sergei Lavrov also said that someone was trying to topple Macedonian PM Gruevski from the outside. According to Lavrov, the events in Macedonia are developing against the backdrop of the refusal of the Macedonian government to join the policy of sanctions against Russia. Moreover, Lavrov said, Macedonia showed support for the plans to build the Turkish Stream pipeline, to which many officials in Brussels and overseas are strongly opposed. "We, too, can not get rid of the feeling that there is some connection there," Lavrov said at a meeting with Serbian leaders in Belgrade.

Macedonia fed up with European promises

There are a few facts to support Lavrov's 'feelings" and Prorokovic's assumptions. Firstly, US ambassador to Macedonia, Jess Baily, showed unequivocal support for "peaceful demonstrators". Secondly, a Montenegrin man, who helped the terrorists in Kumanovo, was arrested and delivered to the US Embassy in Skopje. The government of Montenegro said nothing on the subject.

Thirdly, US Senator Christopher Murphy offered the Balkan countries to switch to shale gas supplies from the US, "to reduce the dependence on Russian gas supplies."

Fourthly, Amos Hochstein of the Bureau of Energy Resources (ENR) at the U.S. Department of State paid a visit to Greece, where he tried to persuade the Greek government not to participate in the construction of the Turkish Stream. Hochstein offered Greece to participate in the project of the Trans-Adriatic pipeline that is said to supply gas from Azerbaijan to Europe.

It is difficult to talk Greece out of the attractive investment project with Russia - it goes about five billion dollars after all. Yet, it is much easier to do so as far as Macedonia is concerned. Macedonia is a multiethnic country with powerful Albanian and Bulgarian nationalist movements.

The USA, with its largest European army base in Kosovo, supports Albania's desire for self-determination in the form of "Greater Albania." The United States does not welcome Macedonia's cooperation with Belgrade. Macedonia and Serbia have been holding joint government meetings, as well as meetings on top levels.

The union between Macedonia and Serbia may evolve into the Orthodox alliance on the axis of Russia-Greece-Serbia-Macedonia. This is something that the West does not want. Therefore, to destabilize Macedonian PM Gruevski, who has been in power since 2006, the West resorted to the already proven method - the Albanian factor that may also affect Serbia.

The West concerned about Orthodox axis in Europe

Greece is returning under the wing of Russia, but Serbia is only beginning to realize the fatal consequences of its partnership with NATO. "Greater Albania" may devour southern regions of Serbia, as well as the territory of the Republika Srpska in Bosnia and Herzegovina.

For Serbia, the events in Macedonia, as well as events in Bosnia in April, mark the beginning of a prolonged crisis. Belgrade must realize this and terminate all negotiations with Pristina. At the same time, one should start negotiating with other Balkan countries, as well as with Russia and Turkey. Serbia's prime objective is not to let the West remove Gruevski from power.

It is worthy of note that the Macedonian nation was created in the process of forced "bulgarization" of the Serb population of Macedonia in the second half of the 19th - in the first half of the 20th centuries. Back in those years, there were no Macedonians in Macedonia at all: there were Bulgarians and Serbs.

Serbia's current position in the region reminds the position of Russia in Ukraine prior to Euromaidan. Bulgaria has 90,000 Macedonians holding Bulgarian passports, while Serbia has no mechanisms to protect Serbian interests in Macedonia.

According to political scientist Oleg Bondarenko, Russia should have eyed Macedonia long ago, not to let the country become another Ukraine or Bulgaria. The pragmatic Macedonian prime minister is fed up with European promises. Russia must build the Orthodox coalition in Europe at all costs. This is the key to our victory over the West.